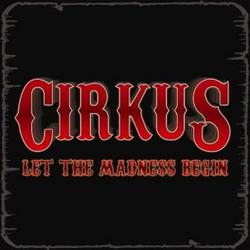 Welcome to the Cirkus … Let the Madness Begin…

In the late 60’s Led Zeppelin gave us “Whole Lotta Love”. Then the 70’s hit and The Clash rang saying “London Calling”, and we answered. In the 80’s Guns ‘N’ Roses took us all to “Paradise City”. The 90’s came and so did Nirvana, saying it “Smells Like Teen Spirit”. Now it’s 2008 and along come Cirkus telling us Let the Madness Begin…and it has, look around folks!

Cirkus, slaps you in the face with Roux’d (vocals), Snetan (guitar), Maston (bass) and Ric (drums), the sound, the edge, and the image of hey-day rockers such as Motley Crue and Aerosmith. Their riffs are fast and hard with lyrics that unapologetically attack big city lights, fast women, and the media. Receiving rave reviews and critical acclaim from Europe to Southern California, Cirkus’s live performances win over even the biggest skeptics.

After releasing 3 successful EP’s for three years straight, Cirkus has just finished their full on frontal assault debut album titled “Let the Madness Begin” together with musical genius Chris Tsangarides, a Grammy nominated producer and mixing engineer for bands such as Judas Priest, Thin Lizzy, Black Sabbath, Bruce Dickinson and Yngwie Malmsteen. Let the Madness Begin is set for a US release on November 11th through Nightmare Records/Koch Distribution. It’s called a shock to the system and senses so what better way to describe a Cirkus attack than Let the Madness Begin. The songs, the sound and the quality of the album speak for itself.

Samples of all songs and more info can be found at:
www.cirkusmusic.com
www.myspace.com/cirkusmusic