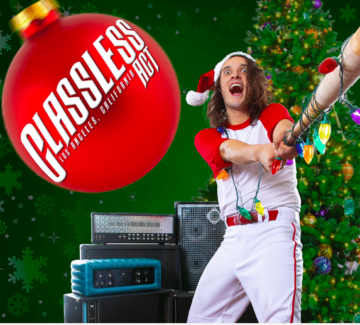 “Hailing from Los Angeles, next-generation rock band Classless Act wants you to have a rockin’ Christmas time as you listen to their cover of “It’s The Most Wonderful Time of The Year” via Better Noise Music today. The track is accompanied by a video drawing inspiration from Bad Santa. Adding some variety to your Christmas playlist, Classless Act’s rendition of the Christmas classic stays true to their classic rock roots. To get in the Classless Christmas spirit, stream and download “It’s The Most Wonderful Time Of The Year” across digital platforms HERE.

Lead vocalist Derek Day shared his thoughts on the band’s newest track, stating, “The boys and I all love AC/DC.  We all love Queen. And we all love Christmas. And what happens at three in the morning on a Saturday when we put them all in a blender…along with a few other key ingredients? Voilà!”

The band continues to radiate a carefree vibe in the “It’s The Most Wonderful Time Of The Year” official music video. Directed by John Orphan and starring Jeff Hilliard, the visual follows an alcoholic mall Santa as he attempts to recall the sordid details of the night before, ending in a fight against another mall Santa. Treat yourself to the tale of this badass Saint Nick.

The industry has been buzzing over Classless Act’s budding career, as Hollywood Life wrote about the band’s debut single, “Rock is having a moment in 2021, and one of the groups leading the sound’s resurgence is Los Angeles’ Classless Act, who just made their first impression by kicking down the door to your earbuds with their debut single, “Give It To Me.”” Check out the official music video:

Notably, the band will be hitting the road next year alongside Mötley Crüe and Def Leppard on their North American Stadium Tour. 2022 will be jam-packed for Classless fans, as the band’s debut album is also expected next year. For more information, please visit: https://classlessact.com/ 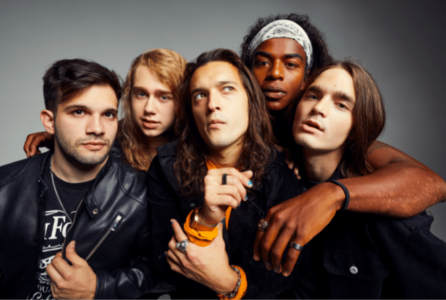 When they released their debut single “Give It To Me” in the summer of 2021, Classless Act were immediately praised for their ability to sound both fresh and timeless. Loudwire instantly added the song to their “Weekly Wire” Spotify playlist, identifying it as one of the top new releases of the summer. And other iconic outlets, like SPIN Magazine, were early to show support. It was a fitting public introduction to a band who embody what it means to be modern rock stars.

The band – consisting of members Derek Day (vocals), Dane Pieper (guitar), Griffin Tucker (guitar), Franco Gravante (bass), and Chuck McKissock (drums) – initially formed in 2018 after connecting and bonding virtually by their love and passion of music. Now in Los Angeles, they’ve united on a mission to be the next great generation-defining act, drawing inspiration from classic rock acts of the 70’s and alt-rock groups from the 90’s. Their music echoes the hallmarks of previous generations – anthemic rhythms, shreddy guitars, soaring vocals – but punches its way into the future with clever arrangements, sharp musicianship, and proficient songwriting.

Already making noise in the industry, the band has been in the studio with world-class producers like Bob Rock, Michael Beinhorn and Joe Chiccarrelli, who have helped craft hits for the likes of the Red Hot Chili Peppers, Metallica, Soundgarden, and The White Stripes. The band recently landed a deal with Better Noise Music, Mediabase and Billboard’s #1 rock label for 2020. Their debut album is expected in 2022, when the band will be hitting the road with Mötley Crüe, Def Leppard, and more, on their summer Stadium Tour.”