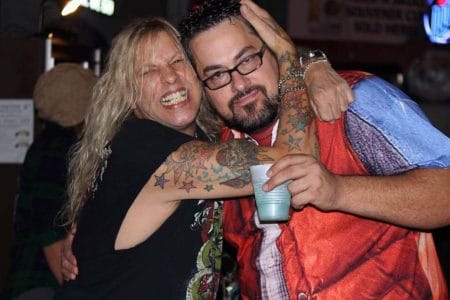 In a rather classy move, Danger Danger frontman Ted Poley has posted a public apology of sorts to Rock N Skull organizer and founder Justin Murr for the former’s “hasty” Facebook post.

Sleaze Roxx posted its interview with Murr back on July 9, 2017 where the Liberty N Justice band founder spoke about the Rock N Skull festival including some of the difficulties that hindered the festival last year as well as this year leading up to its last edition at the Avanti’s Dome in Pekin, Illinois, USA from October 27 to 29, 2017.

Poley ended up posting a comment via Facebook at the end of the Sleaze Roxx interview that was recently turned into a news article today by Metal Sludge.

Amid some apparent public backlash, Poley contacted Sleaze Roxx later today asking for his original Facebook post at the end of Sleaze Roxx‘s interview with Murr to be removed, which Sleaze Roxx agreed to do.

Poley has now posted a Facebook message (see below) apologizing to Murr for some of the comments he made and explaining his state of mind on why he posted the comments in the first place.

Tickets for Rock N Skull‘s One Last Ride edition in Pekin, Illinois, USA from October 27 to 29, 2017 can be bought at: https://rocknskull17.ticketbud.com/rock-n-skull-17. 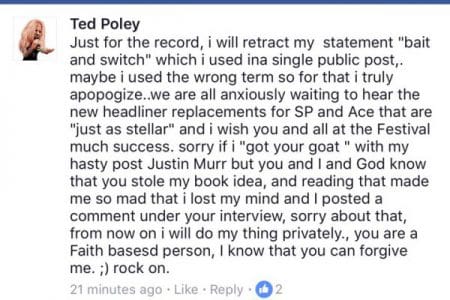