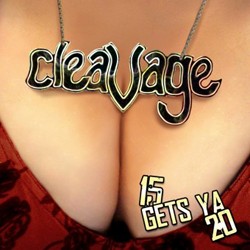 Twenty-two years after releasing ‘The Demo’, Cleavage re-releases this highly sought after album with eight additional bonus tracks. The band has also compiled a much anticipated 18 track album of never before released material entitled ‘XOXO’.

New Jersey is obviously known for its great hard rock exports like Bon Jovi and Skid Row. In the early ’90s, New Jersey rockers Cleavage were chomping at the bit, prepping to be the ‘Next Big Band from the Garden State’. And the fans were right there in stride; calling into radio stations (requesting spins of Cleavage tracks), resulting in the band often beating out bands like Bon Jovi and Skid Row on the nightly local countdown programs. Cleavage was a band that had it all — catchy melodic songs, an over-the-top live show, an ever-growing fan base, major label interest, and girls, and girls, and more girls!

Cleavage was the brain child of Hollywood Tease guitarist and songwriter Larry Ganci. In the late ’80s Hollywood Tease was the first hard rock band to be signed to the famous rap label Sugar Hill Records and their independent offshoot Bon Ami Records. As the record label was going through a transition, Larry started a cover band called Cleavage with the members of a band he was producing. Cleavage soon realized that they had something special and transitioned from a cover band to one of the most respected local bands on the New Jersey circuit. A few personnel changes resulted in a tight knit band that commanded the respect of fans and industry people alike. Cleavage was composed of Larry Ganci (vocals), brothers Ronnie (guitar) and Mike (bass) Parkes, and Scott ‘Nazz’ (drums).

With the band in full effect and Larry at the helm, Cleavage entered the studio and churned out what some consider one of the best hard rock, self-released albums (‘The Demo’) to ever hit the music scene. With strong comparisons to Bon Jovi and AC/DC, and having that classic blue-collar New Jersey sound with a tinge of metal edge, the album quickly sold out. A limited second pressing was made with an extra track that also sold out quickly, this was due to heavy local radio support, which in turn led to an increase in show attendance and demand for the band. In fact, one fan favorite, “15 Gets Ya 20”, held the #1 local spot for several weeks in a row on WSOU. Within one years time, Cleavage became a top draw headlining act and local opener for national acts. A management deal and showcases at legendary clubs like the China Club would follow. Then came the major label interest… and then came Nirvana.

With a resurgence of interest in ’80s style hard rock and the loyalty of those who never wavered, it became evident that the Cleavage material was a no-brainer when it came to albums needing a re-release. With very few copies ever printed of the original 1990/1991 releases, both versions of the album ‘The Demo’ became collectible, commanding large sums of money on the market. The problem with this is that the high price keeps some fans who want the music from ever obtaining it. So FnA Records approached the band and Cleavage decided it was time to make their music available to all fans at a fair price. Cleavage also mentioned that they had enough tracks recorded to not only add bonus tracks to ‘The Demo’, but to also release an album of never-before-heard material recorded from the same time period.

Available exclusively from FnA Records — www.fnarecords.net — are two fully remastered albums by Cleavage entitled ’15 Gets Ya 20′ and ‘XOXO’. ’15 Gets Ya 20′ includes all the tracks from the highly-sought after ‘The Demo” album. Additionally, eight bonus tracks have been added including the Billboard winning track “Time May Rust” and an unedited version of the band’s classic “Blood and Wine”. All the newly added tracks are just as catchy, just as hooky, and just as rockin’ as the fans will remember. And for those that are new to the music of Cleavage, they will finally have the chance to hear one of the best ever self-produced, eighties style, indie hard rock albums of all time. But it doesn’t stop there. The band has opted to release another album of unreleased tracks making all of Cleavage’s material available to fans around the world — old and new alike. The second album entitled ‘XOXO’ is packed with high-energy hard rock gems. With seventeen tracks in all, ‘XOXO’ is a rocker’s paradise with a few obligatory ballads.

Do yourself a favor, expose yourself to Cleavage, and don’t miss out on one of head-banging hard rock’s absolute ‘Diamonds In The Rough’. ’15 Gets Ya 20′ and ‘XOXO’ are available individually, as a package deal, and in an autographed Fan Pack version at www.fnarecords.net.