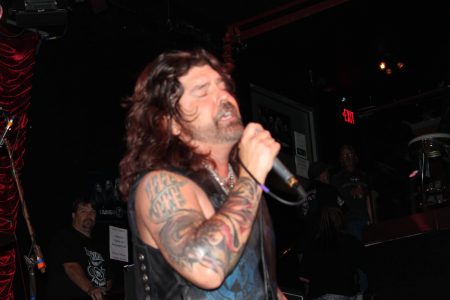 Cathey was asked how he has been able to keep his vocals intact over the years to which he replied (as transcribed by the 80’s Glam MetalCast podcast):

“I’ve been very fortunate man. I’ve taken care of myself. I’ve always been a bit of a gym rat, eating right. I realized a long time ago, if you wanted to be able to do this for an extended period, especially at the level that I sing at which is a lot of high end hard rock and metal type vocals, I just made my mind up that I wasn’t going to smoke, drink hard liquor, do lines of coke off of strippers asses like I could have back in the day… Just limit the debauchery and I’ve been able to hold on to my pipes over the years.”

In terms of playing a reunion show with his old Cold Sweat members including Keel guitarist Marc Ferrari at the Monsters of Rock Cruise Pre-Cruise Party at Magic City Casino in Miami, Florida, USA on February 6, 2020.

Cathey indicated: “It was a fantastic experience. After not seeing those guys for close to 30 years, to be able to reunite and play an event as prestigious as the Monsters of Rock Cruise… It was an honor and a privilege. It went great man. It rekindled the spirit of us wanting to play together again. So we are in discussions to do a couple things.”

You can listen to the interview with the three SteelCity band members, Mike Floros, Roy Cathey and Jason Cornwell, on the 80’s Glam MetalCast podcast below:

In this episode, I talk to 3 of the members of SteelCity – Guitarist Mike Floros, Vocalist Roy Cathey (Cold Sweat) and Bassist Jason Cornwell (Eric Martin Ba…