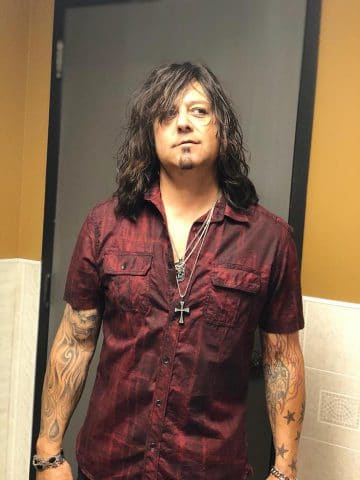 Bang Tango bassist Lance Eric has apparently tapped his Color Of Chaos bandmate Steve Favela to fill in temporarily for guitarist Rowan Robertson for a number of gigs.

“Say hello to Mr Steve Favela who will be filling in on guitar for a while as our beloved Rowan Robertson stays busy at his residency in Las Vegas. Sorry guys, he is not single…”

Color Of Chaos‘ “Bio” on their website states in part:

“Influenced by big choruses, powerful melodies and strong hooks. Color of Chaos, with stellar musicianship and pulverizing live shows, are gaining fans across the globe that are discovering the band that is bringing back Rock & Roll.

Color of Chaos was formed in November 2014 by a group of exceedingly versed musicians and has already taken radio stations around the globe by storm. The first release off their upcoming debut album “HOLLYWOOD” has received dazzling reviews by critics and fans alike, quickly gaining momentum with exposure worldwide in daily rotation of the  radio world and by June of 2015, the band was offered their first show as support act to Scott Weiland.

Color of Chaos‘ unique sound and melodic verses will have you singing alongside, returning a  fresh perspective to Rock N Roll, something that has been absent for quite some time. Well accepted by various radio hosts, Color of Chaos has attained awe-inspiring appraises, preserving the authentic quality they inspire to express through their music…”