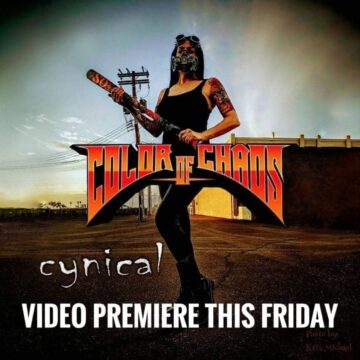 Sleaze Roxx stated the following in its review of Color of Chaos‘ debut album Hollywood:

“Contrary to Bang Tango, Color of Chaos play more straight up mid-tempo “classic rock” and radio friendly rockers with a little tinge of country music such as on the first single “Simple Times.”  All the songs are well crafted and the emphasis is placed on some good melodies, some timely guitar work (check out the guitar solo on “Fadeaway”) and singer Steven Carlson can seemingly handle anything vocally. Color of Chaos‘ songs remind me a bit of Dokken except that there isn’t as much variety.”

Sleaze Roxx concluded in its review: “Overall, Color of Chaos have come with a radio friendly album, which lacks bite during the first half and picks up quite a bit during the second half. I’d really like more songs with more attitude from the band such as the tracks “Fight,” “Push” and “Hate.” You can pick up Color of Chaos‘ debut album Hollywood directly from the band’s website.”