Road trip! As soon as I saw that Ace Frehley was playing in Buffalo, New York, USA which is within striking distance from Toronto, Canada – or less than two hours with no traffic and possibly four hours with traffic — I contacted my friend The Meister who I just knew would be game to do the road trip to see the Spaceman. After all, it had been almost a year since our last concert road trip to the States to see Judas Priest with Steel Panther opening if you don’t count our annual trip to see the M3 Rock Festival. Several months later and capping off a busy last few days of concerts (Scorpions with opener Queensryche three days prior and Killer Dwarfs two days prior), we were off to see Ace Frehley in Buffalo.

This would be my third time seeing the Space Ace play live without KISS as I had previously seen him in Ottawa in 1995 during his “Bad Boys Of KISS” tour with Peter Criss and thirteen years later in Toronto in 2008. Both of those prior Frehley shows had been absolutely stellar so making the trek to Buffalo, which would likely mean getting back home after the concert at around 2:00 am before an early start at work seemed like a no brainer.

While getting to see the one of a kind talented guitarist play live was sure to be a treat, travelling to Buffalo during rush hour traffic coming out of Toronto was definitely not. With the doors at the UB Center Of The Arts opening at 7:30 pm, only one advertised opening band (a New York band called Klear) and the likely bumper to bumper highway traffic to get out of Toronto, The Meister and I elected to leave at 5:00 pm from Toronto allowing us a good four hours to get to destination in case the traffic was as bad as anticipated and if the Canada-US border crossing was not smooth sailing. Although highway traffic out of Toronto was bumper to bumper and crawling at a snail’s pace, once we past a certain section of the Oakville suburbs, it was smooth sailing all the way to Buffalo including the Canada-US border crossing and we arrived at the venue a little after 7:30 pm.

Given that the time required to get to the venue was hard to predict, we did not eat before getting to the UB Center For The Arts and sadly, our pre-concert meal turned out to be some subpar pizza – that had likely been sitting for a while – at a nearby hockey rink. Definitely not the dinner of champions! It’s always fun checking out a new concert venue and the UB Center Of The Arts is actually nestled within the University of Buffalo grounds. As we were entering the venue, lots of students were exiting presumably after one of their classes had finished. The hallway leading up to the theatre style venue was under construction but there was a middle alleyway filled with concert goers having a drink or just hanging out while opening act Klear tried to warm the seated crowd up. 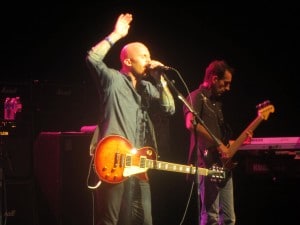 What was instantly noticeable about Klear was that their guitar playing singing frontman was a bundle of energy while the rest of the group could have literally passed off as statues on stage. It made for an odd visual scene with one guy so into the music while the other four looked almost bored or paralyzed out there. With Klear’s melody less alternative type music really not resonating with me as well as seemingly many of the polite clapping public, it was just a matter of sitting and patiently waiting for Klear to finish off their set. Unfortunately and despite Frehley’s stage set being pretty much already set up to play, the crowd was forced to wait over one hour and 15 minutes for Frehley and his group to hit the stage. This was a bit annoying but not that surprising given that we are talking about the unpredictable Ace Frehley here! 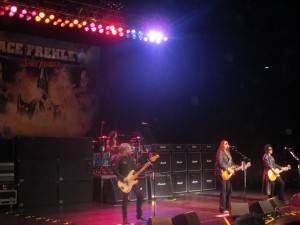 Eventually, Frehley and company made their way onstage during the familiar instrumental “Fractured Mirror” and the band played two tracks from Frehley’s new album Space Invader, which I was unfamiliar with since I had not picked up the Space Ace’s latest solo effort. It was not until the group launched into the KISS classic “Rocket Ride” that the crowd really got going. During what seemed like at least the first five tracks, both Frehley and guitarist Richie Scarlet were trying to push the crowd with comments to the effect as “it’s not like this is a Monday” (which it was). Whatever crowd lethargy that Frehley and his bandmates may have noticed was easily cured with a few more KISS songs which included “Parasite” and “Love Gun.” While the inclusion of the latter song in Frehley’s set seems a bit odd to me, drummer Scott Coogan’s lead vocals during the song were arguably better than what KISS‘ Paul Stanley has been able to come up with live these days.

Recorded in Buffalo, NY at the University at Buffalo Center for the Arts on September 21st 2015 in support of the 2015 Space Invader Tour. 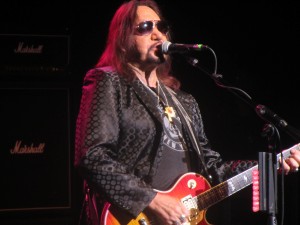 What I have always loved about Frehley is that he is sort of this reluctant frontman / superstar in that Stanley and Gene Simmons were clearly the main spokespeople of the band during Frehley‘s tenure in KISS while Frehley tended to appear as the go lucky — and in the late ’70s early /’80s intoxicated — talented guitarist. When Frehley left KISS and came back with his solo band, he was forced to take the frontman duties which I think he has never been completely comfortable in doing. Accordingly — and although I think that his many fans are certainly happy to have Frehley front his own solo band — the Space Ace sometimes does not look that comfortable in that role and would rather just let his guitar do the talking. Nevertheless, Frehley addressed the audience quite a few times during his show in Buffalo often making little snide remarks such as knowing a “few of those” when introducing the song “Parasite” or something along to “go figure” when introducing his “biggest hit” “New York Groove.” 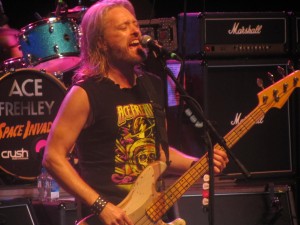 Frehley‘s setlist was what I expected it to be — a few new tracks (three) from Space Invader, a few tracks from his first KISS solo album (four if you count the intro “Fractured Mirror”), a lot of other KISS songs (seven), a couple from his first post-KISS solos album (two tracks) and not much else. I would have definitely liked to have heard more tracks from Trouble Walkin’, which I consider to be one very good album, but at least he played one track (“2 Young 2 Die”) from that record. Aside from the obligatory new songs of which the riff based “Toys” was really good, there are only two tracks that I wished that Frehley had not played and replaced with other tracks. “Breakout” which was sung by Scarlet has never been a favorite of mine and Scarlet seemed to have a hard time getting through it vocally. “Snowblind” is likely considered a classic Space Ace song but I would have much rather heard the upbeat “Speedin’ Back To My Baby” from the same album. Aside from these minor setlist complaints, I was definitely pleased with the choice of songs for the evening. 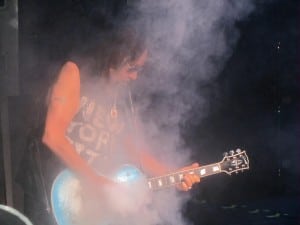 It was neat to see every band member in Frehley‘s band take a turn with the lead vocals. Coogan definitely gets my nod for best singer out of the three band members but bassist Chris Wyse held his own while he handled the lead vocals of I believe “Strange Ways.” Unfortunately, there were quite a few solos throughout the evening. I’ll take Frehley playing a guitar solo every time as his guitar solo with his smoke filled guitar during or after “Shock Me” never gets old. However, having a bass solo and a mini duet guitar solo between Frehley and Scarlet seemed unnecessary, a bit of a mood killer and it would have been better to have a few more extra songs. Frehley and his bandmates ended their set on a real high with “Shock Me” and “Rip It Out” before the group came back for two encores: “Detroit Rock City” (sung by Coogan) and the classic “Deuce.”

Overall, Frehley and his band put on a great performance and I’ll be sure to catch the Space Ace the next time that he is within striking distance of Toronto. As anticipated, I did not make it home until 2:30 am and despite only getting a few hours of sleep for the next work day, it was all well worth it!