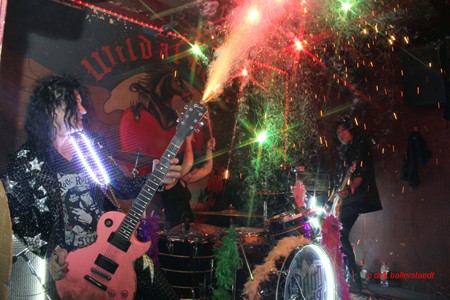 ADAM BOMB RETURNS WITH A CARNIVAL OF GLAM

I know it’s a cliche, but what else can I tell you except this was one of the better club shows I’ve seen in a long time.

One day before the show I was cruising through the internet looking for shows in Berlin and was positively shocked to see that the next day ‘fatal attraction ‘ Adam Bomb (the guitar hero from New York) would be in town to perform a show. I knew Adam Bomb from his early work on TKO‘s In Your Face album, which was released in 1984, and back then he was well known for his melodic and rough guitar delivery — and a year later his first solo album Fatal Attraction came out. Hopefully a lot of you who are into that classic melodic hard rock will know songs like “SST”, “Shape Of The World” or the smash “I Want My Heavy Metal”. 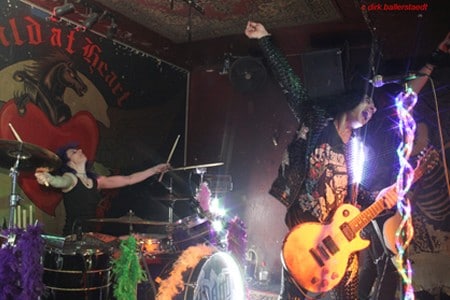 The promotion for this show was a bit lacklustre, but a few fans managed to come out and rock. After two support bands, and a beer later, Adam Bomb and his wonderful band — consisting of English drummer Violet The Cannibal and Italian bassist Paul Del Bello — entered the small stage. With drums decorated with colorful scarves and little lights on the amps and guitar straps, it was damn clear that glam rock was going to have its revival tonight.

Adam Bomb lit off a little pyro from the neck of his rose guitar and then the band started things off with “Angry Angry” (a song written by John Paul Jones). As the smoke from the pyro slowly cleared away the show went on with heavy tunes like “Crazy Motherf**ker”, “SST”, the crazy romantic love song about fellatio “Je T’aime Bebe”, a fast version of AC/DC‘s “Let There Be Rock”, “Rock Like F**k”, and the dynamic hard-driving “Pure S.E.X.”. The show was all about having fun, and every fifth or sixth song Adam lit up a little more pyro from his guitar neck and enjoyed lighting fire to this small stage. 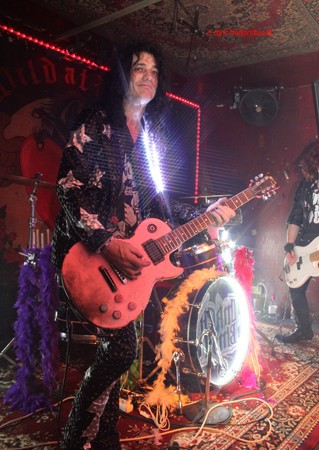 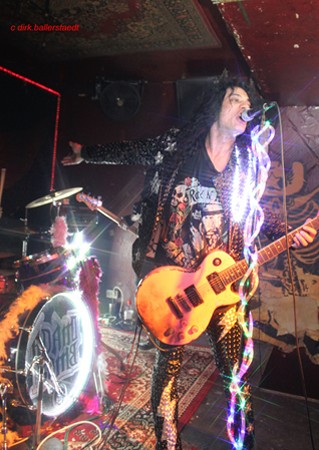 I’m always surprised how many fans find their ways to almost secret gigs like this, and these rockers know all the lyrics and aren’t ashamed to sing along. I think German, or European, hard rock fans are very loyal and don’t forget about good music and bands from way back in the ’80s. Adam Bomb, who now lives in New York, is an entertainer that performs the way only an American can — he walks the stage like it is his living room, he interacts with the crowd like you’d expect from a rockstar, he can play guitar while singing melodic and powerful lyrics and he’s still a living legend. OK, maybe that’s a bit of a stretch, but with a show like this you get your money’s worth (and still have some left to buy a CD or a shirt).

Even though Adam Bomb ruled the stage, his two band members are more than side players — they are the solid ground that an ego like Adam needs in order to fly high through his very varied repertoire which after a bunch of rocking tunes led directly into his so-called “Guitarmageddon”, a wild solo which featured a lot of quotations throughout the music. After that it was time to heat the place up with “I Want My Heavy Metal”, which is his best known song, and it was time for an intermezzo with the audience where Adam let the audience sing with him. Finally female drummer Violet The Cannibal (what a lovely name) did a kick-ass drum solo with burning cymbals, and then it was party time again with KISS‘ “Detroit Rock City”. 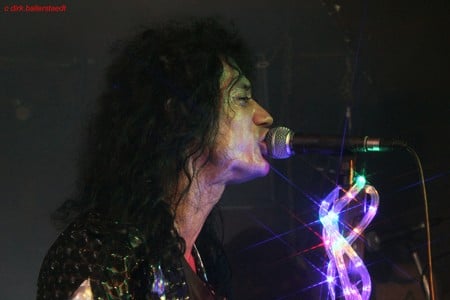 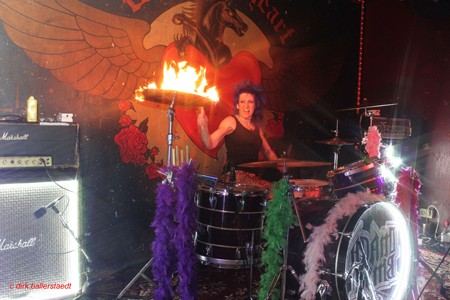 It was very obvious that the fans wanted more and resulted in Adam Bomb doing three encores, the highlight being a furiously rocking and swinging rendition of Frank Sinatra‘s “New York, New York”. Even though Adam Bomb has a lot of his own material, performing more than four cover-tunes was no risk at all. On the contrary, this guitar hero from New York is — first of all — an entertainer who breaths more than life into other compositions and allows them to bloom like exotic flowers. It was all very exciting and colorful.

It might sound like I saw this show though rose-tinted glasses, but Adam Bomb (and by that I mean the entire three-piece band) was more than a surprise on this Saturday night. The three rockers were even nice while signing autographs after the show, selling CDs and shirts, and had a little chat with their fans.

To me Adam Bomb is a survivor of the ’80s hair-metal scene — and his attitude is like a little box filled with shining pearls that you always want to play with. What more can you expect from a musician who has been in this business since 1980? 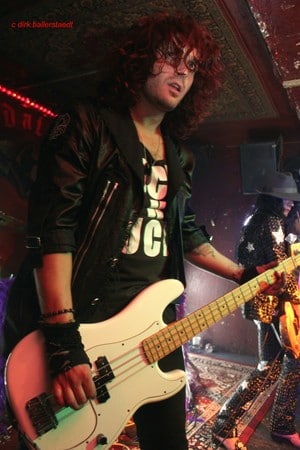 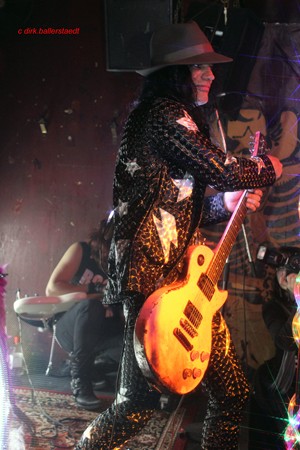