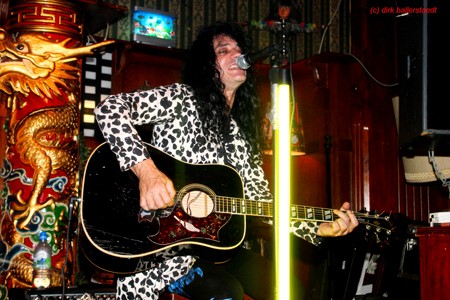 ADAM BOMB’ED THE STAGE WITH A VENGEANCE AND A SMILE

While Hurricane Irene hit the American East Coast between North Carolina and New York, leaving massive devastation behind, another rock ‘n’ roll storm broke loose in a German club. Berlin’s White Trash Club hosted a little whirlwind of its own when New York guitarist/singer Adam Bomb played a two set show. Earlier this summer Adam Bomb played some club shows and festivals throughout Europe with his two bandmates, Violet Cannibal (a UK drummer who had joined the band a year before) and Paul Di Bello (an Italian bassist who has rocked with Adam for a few years now), and now he had returned. 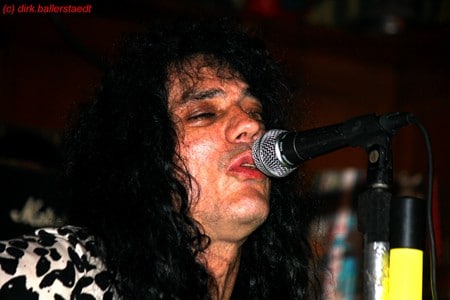 The show opened with an acoustic set that Adam Bomb started alone before bassist Paul Di Bello joined him for a few songs like “Detroit Rock City”, “Rock’N’Roll All Nite” (both KISS covers) and also the Rolling Stone tune “It’s Only Rock’N’Roll”. It was interesting to see Adam Bomb armed with only his six-string guitar and his voice — allowing him to free his deep soul during the acoustic set.

After a thirty-five minute acoustic performance Adam Bomb left the stage to the applause of the club’s audience and returned after an hour long break with his full-on electric glam rock show complete with gleaming lamps, burning guitars and drums, and firecrackers shooting towards the ceiling. It was the type of show we have come to expect from the American glam rocker that has been in the rock business since 1977, starting out in a cellar at his Seattle home as a teenager and a ‘hot shot’ in the neighborhood. And then… oh boy, Adam Bomb rocked with TKO, the band that hit the scene with the classic ‘In Your Face’ album, and since then pursued a solo career that started off with the ‘Fatal Attraction’ debut that contained such treats as “I Want My Heavy Metal”, “SST”, and “All The Young Dudes”. He never reached the level of stardom that other bands he lived next door to in Los Angeles did when Hair/Glam Metal was big, but he definitely deserves a bit more success… and a bigger crowd. That’s why he likes to play bigger festivals, it gives him a chance to rock in front of thousands of, well… Thrash or other metal fans, and wins them over with his old-school glam rock with a harder edge. 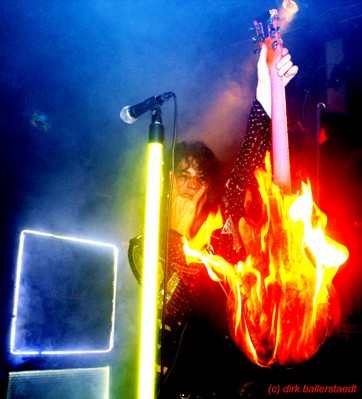 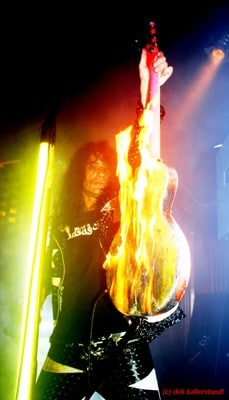 The White Trash Club was very ready for Adam Bomb‘s glam show. One fan was celebrating his birthday that evening, and many women seemed to be addicted to the colorful scarves and shining lights on the Marshall amp rack as everyone welcomed Adam Bomb back to Berlin for another summer night’s event. The frontman was thankful and performed songs such as “Rock Like Fuck”, “SST”, “Je T’aime, Bebe” and his biggest hit to date “I Want My Heavy Metal”. Adam Bomb also performed his wonderful swinging rendition of Frank Sinatra‘s “New York, New York”– his version is always a climax of his live show. New York mayor Ed Koch made the Sinatra song the official New York anthem back in 1985, so I think Adam Bomb is proud to be a New York resident even though he was born in Seattle. 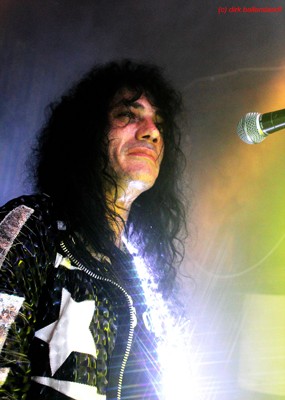 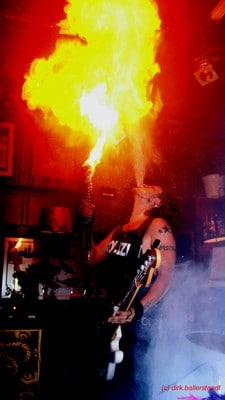 Adam Bomb himself is one of the guitar heroes of ’80s hair and glam rock — a musician that breathes glam rock and a fighter who is doing over 250 shows a year in a white rock ‘n’ roll van (if you see a van with a girl and two curly haired men inside banging to rock’n’roll — its probably the Adam Bomb Band), performing at outdoor festivals and shitholes in the middle of nowhere. But this winter Adam Bomb returns to the American club stages, and believe me, if you’re into ’80s glam rock, burning cymbals, firecrackers, and guitars being set on fire… you definitely need to be standing in the audience for an Adam Bomb show — and when he’s happy with the crowd you can see a smile on his lips. 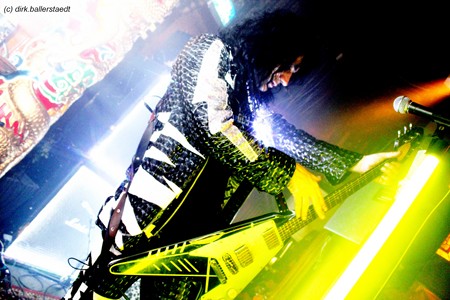 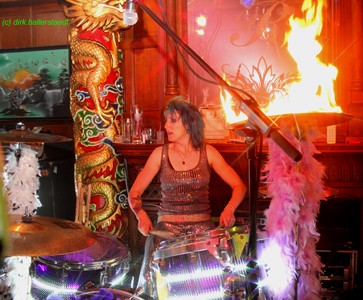