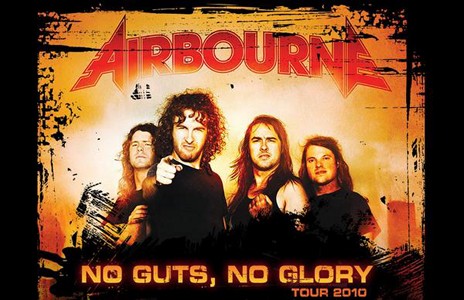 Walking through downtown Kitchener a few weeks ago I came across a sign at the Elements Night Club indicating ‘Airbourne on August 3, 2010′. Could it be that this kick-ass Aussie foursome was playing a small nightclub in Kitchener when Toronto was less than one hour away? A quick check of the group’s website revealed that Airbourne was doing a comprehensive tour of Canada from coast to coast — and yes, they were playing in London, Kitchener and Toronto from August 2 to 4 even though London and Toronto were only two hours apart.

It wasn’t until around 10:30 pm, in front of a crowd that I would estimate at about 500 people, that Airbourne finally hit the stage with “Raise The Flag” followed by “Hellfire”. It was clear that the Airbourne guys were going to rock hard and with lots of energy! Unlike many concerts for other more seasoned heavy metal bands, the crowd on the floor was made up of mostly less than 30 year olds. With two similar hard hitting CDs under their belts, ‘Runnin’ Wild’ and ‘No Guts. No Glory.’, Airbourne kept the energy up throughout their 75 minute set, playing slightly more tunes from their debut CD.

Joel O’Keeffe was a wildman and the definite leader of the band. At one point during an extended jam during “Girls In Black” he climbed on a not so steady 8 or 9 foot amp and then proceeded to go through the crowd and stand on a bar at the other end of the nightclub! The other guys in the band were no slouches either, with bassist Justin Street headbanging like crazy and along with rhythm guitarist David Roads kept the main choruses nice and loud — this allowed Joel O’Keeffe‘s voice to have some respite. Obviously, consistently playing four shows in four nights has taken a bit of a toll on his voice. Nevertheless, his gruff sounding vocals still fit the songs quite nicely live. Drummer Ryan O’Keeffe kept the beat going although his presence was not that strong, at least from the floor section.

Surprisingly, the highlights for me were the slower tempo songs with the big choruses such as “Cheap Wine & Cheaper Women” and of course “No Way But The Hard Way” — “Diamond In The Rough” was another favorite. Those songs seem to work better than the faster ones such as “Born To Kill” and “Stand Up For Rock N’ Roll”. Sometimes it felt like Airbourne was just a younger, hungrier and faster version of AC/DC. Surely the Airbourne guys would take that as a compliment — it certainly looks like Airbourne is picking up where AC/DC has left off/will leave off.

The show ended with a rousing rendition of “Runnin’ Wild” which included Joel O’Keeffe bashing about 3 or 4 beer cans on his head before they exploded. Impressive!

Airbourne put on a great show and are definitely worth seeing live. Odds are they will be playing your town/city on their very comprehensive world tour! They are not to be missed!