Airbourne and The Wild! invade Minneapolis 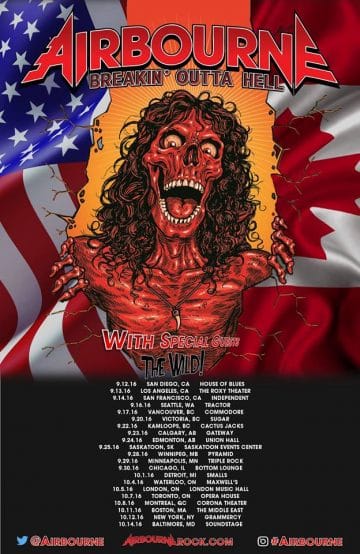 On Thursday, September 29th, the Triple Rock Social Club in Minneapolis, Minnesota, USA played host to the Australian foursome, Airbourne. They brought along with them, the crazy and very entertaining band The Wild! out of British Columbia, Canada. I’ve been a fan of Airbourne‘s since their first full length album and couldn’t wait to see them for a second time. As for The Wild!, it wasn’t until I read Sleaze Roxx editor Olivier‘s review of their album, GxDxWxB, on Sleaze Roxx back in August of 2015. That album ended up at number two on Sleaze Roxx’s Top Ten Albums of 2015.

I had never seen a show at this particular venue before and a few friends told me it was a very small and intimate club. As we drove by the front door, there was about fifty eager fans waiting for the doors to open. Since the club is very close to a college and student housing, parking was a challenge and we ended up having to park four blocks away. By the time we got to the club, the doors were open and people kept coming into the line to get in. Once inside, we worked our way up front to try to get some pictures. Once the show started, there was a good three hundred plus fans inside and not much room for many else. I liked the way it was set up with the stage down 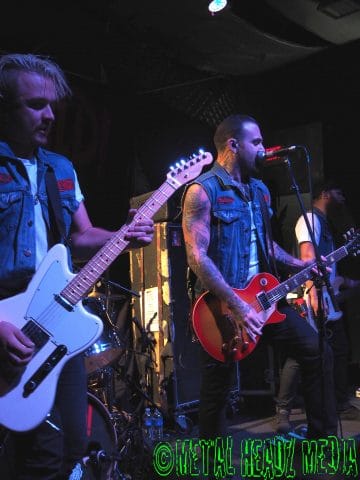 a few steps from the bar area and some seating and standing room up by the bar, overlooking the stage. There wasn’t a bad place to watch, unless you were buying a drink at the bar.

I was very impressed with The Wild!‘s dirty, gritty rock and roll sound on their CD, but it was nothing compared to seeing them live. Dylan Villain (vocals/lead guitar), The Kid (rhythm guitar), Lucas ‘Boozus’ (bass/vocals) and Reese Lightning (drums) are crazy on stage, hence the name — The Wild! They started off the night with “Roadhouse” which has a ZZTop, southern boogie feel to it. Villain and Boozus‘ vocals compliment each other well as they swapped the verses in the song. Their infectious music is a hybrid of punk, metal, rock and blues which shined through on their songs “Living Free” and “Ready To Roll.” Halfway through their set, I got hot and decided to go up by the front door to cool off and get some more pictures from above. It was great to watch these guys from a little further back and see them as a whole. You could really tell they loved to play live and they kicked ass doing so. Their setlist was highlighted by their songs “Banger,” “Slow Burn” (my favorite of the night), “Rattlesnake Shake” and what could be their anthem, “Party ‘Til You’re Dead.” If you ever get a chance to catch this band live, I highly recommend you to do so. They are an all around fun party band, full of non stop energy. 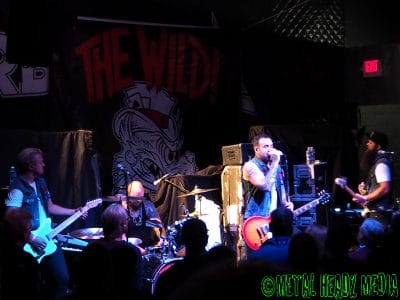 This is my second time seeing Airbourne and I don’t know where they get their energy. They are non stop from the second they hit the 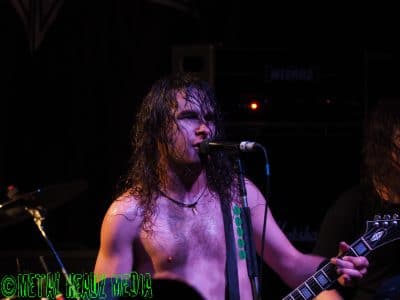 stage until the final notes of their last song. They take the AC/DC formula, turn it up a notch and definitely make it their own. My only complaint of the night was their short set of eleven songs. It seemed they were done before you knew it, but that also means they were that entertaining too. “Ready To Rock” set the pace for the night followed by “Too Much, Too Young, Too Fast” and “Chewin’ The Fat.” Joel O’Keeffe can hold his own with any frontman and being able to play lead guitar to boot makes him very underrated in that catagory in my books. Joel‘s brother Ryan O’Keeffe on drums, holds things together along with David Roads on rhythm guitar and Justin Street on bass. These guys hold nothing back and it doesn’t matter if their play for a couple hundred people or thousands, they give 110% every show.

Airbourne pretty much stuck with their most popular songs along with new songs, “Rivalry” and and “Breakin’ Outta Hell” off their newest album with the same name. “Girls In Black,” “Cheap Wine & Cheaper Women,” “No Way But The Hard Way” and “Stand Up For Rock ‘N’ Roll” were the songs that rounded out their main set. At one point during the show, Joel climbed onto a security guard’s shoulders and ripped through a guitar solo and later challenged people to climb onto somebody’s shoulders to compete for his attention and he would throw them a beer to “chug” down. Only one out of four were able to complete this 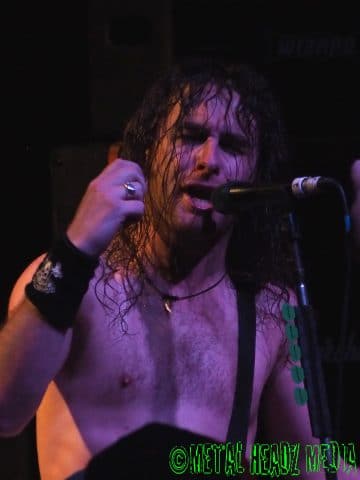 entertaining challenge. To finish off the night, Ryan O’Keeffe came out to the front of the stage to crank up an old air raid siren to start the encore which led into “Live It Up” and “Runnin’ Wild.”

It was great to see these two great and very entertaining bands in such an intimate venue. I will definitly make an effort to see both of these bands the next time they are in my area.