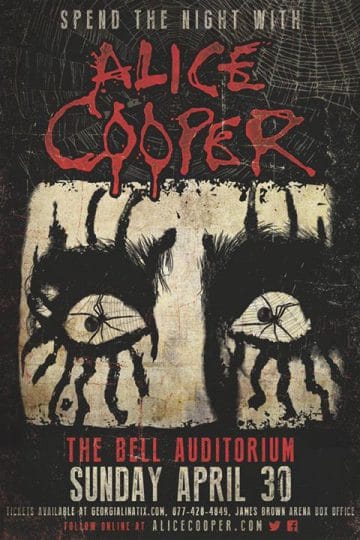 Originally opened March of 1940, William B. Bell Auditorium has consistently existed as an entertainment venue in Augusta, Georgia for well over 70 years. While larger cities continue to regularly build new large venues in less than half that amount of time, the “Bell” (as it is affectionately referred to by locals) has stood strong with merely occasional updates that not only keep the near 3,000 seat venue relevant but also allows it to regularly outperform much larger sister venues like the James Brown Arena. But while the Bell houses a long history including an early stop by Elvis Presley in 1956, Ray Charles canceling a 1961 show as a stand against segregation, and nearly 30 years of professional wrestling, many would have to agree that the Bell has never heard and seen a show the likes of which Alice Cooper brings. Sure there have been many a classic rock act such as Styx and Boston perform at the historic venue. Even heavier bands such as Bush and dare I say it, Nickelback. But someone the likes of Alice? Like there is even someone that can compare.

When this show was announced, many in the rock community were sure that it was a joke, a tease, a way early April Fool’s prank. Of course, the 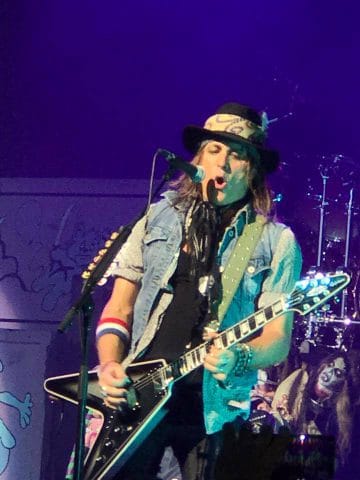 majority of the area barely noticed as they were preparing their shorts and sports polos for several outdoor hipster concerts due to be set alongside the annual arrival of tourists in town for the Masters golf tournament. While this of course kept what should have been a sell-out from happening, the rock community, always starving for a good rock show, came out in support and showed Alice a great time. Ever the professional, Alice returned the favor in leaps and bounds.

Over the years, Alice has been known for his large, over-the-top shows performed with a large cast of characters and props but the more “intimate” Spend the Night with Alice Cooper show that landed in Augusta was of a smaller scale stage-wise, which only proved that Alice can rock an audience with the most scaled back of shows. Yes, there was Frankenstein, a beheading, and multiple costume changes but all in all, this date placed full focus on Alice and his incredible band, which perhaps is part of the reason why the setlist (and setlists from other dates) was varied and while including “must have hits”, also included a few deeper cuts.

The mood in the auditorium was festive with old friends reuniting all around and many up front taking pictures of the huge spider eyes stage backdrop while the sounds of songs in the vein of Alice’s early work rocked through the venue. I don’t know about anyone else but this is a feeling I 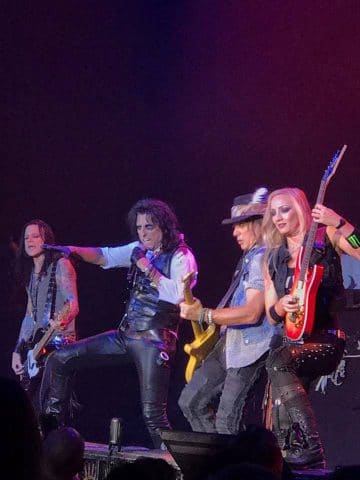 have missed — that feeling of being where you belong, full of excitement and rock and roll bravado. In my day, there was this feeling of pride that filled up those who truly believed in the power of rock and roll. When that returns larger than normal unexpectedly, it can be quite an emotional experience. Say what you will, but when the lights went out and the crowd cheered, the hairs on my arm stood up. When the “spend the night” intro kicked in, I got chills. When the band kicked into the first song (“Brutal Planet”) and the pyro went off… I almost cried. So many memories of concerts in that venue years ago in my youth with half the people there that night just came crashing back and it’s a feeling I wish everyone could experience later in life at least once.

Now I will admit that my Alice Cooper fandom stems mainly from my ’70s youth and my heart leans towards that era and then jumps to the mid ’80s stuff. So when the band kicked into “No More Mr.Nice Guy” and “Under My Wheels”, I was in rock and roll heaven (or in this case, hell) but it was beyond cool to hear “Lost In America” from 1994’s The Last Temptation of Alice Cooper album and “Pain” from the odd 1980 release Flush The Fashion before killer versions of classic ’70s tracks “Welcome to My Nightmare” and “Billion Dollar Babies.”

The rest of the show was pretty much a kicking mix of early Cooper favorites like “Cold Ethyl” and “Ballad Of Dwight Fry” intertwined with ’80s rockers such as “Poison” and “Feed My Frankenstein” (complete with Alice’s transformation to a huge stage grabbing monster). Of course, Alice lost his head and his 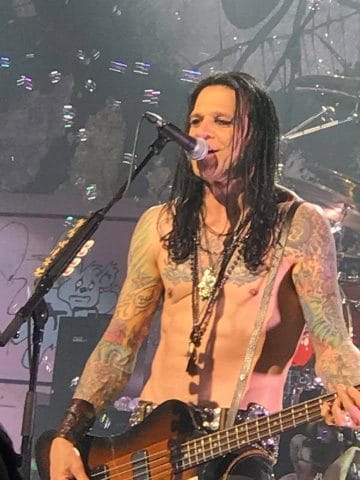 more than incredible band rocked solo spots including a killer light-filled tag team from drummer Glen Sobel and bassist Chuck Garric. Wunderkind Nita Strauss kicked off the solo spotlights as part of “Women Of Mass Distraction” and of course Tommy Henriksen and my personal fave Alice Cooper band member Ryan Roxie would not be denied as they tore spots up as well. It could be said that I was probably just as excited to get to see former Electric Angel Roxie live as I was to see Alice.

In grand Alice Cooper fashion, the regular set ended with the killer tandem of “I’m Eighteen” and “Elected” (both huge songs from my childhood) before Alice came out for an amazing encore of “School’s Out” injected with Pink Floyd’s “Another Brick In The Wall.”

While no one could argue buying a ticket for an Alice Cooper concert filled with the songs performed on this night, to be able to enjoy such a show in a venue small enough that there was not a single bad seat and to do so for ticket prices far below what some bands of far less stature charge is a testament to an artist who still to this day wants badly to keep rock and roll alive and well and there for the fans. I for one am not only grateful to have enjoyed an amazing rock concert in a city known more for other music (a lot that is still cool but not rock) but also for the main reason why I even picked up tickets in the first place.

After almost 30 years together (with a short break in between), it was cool to surprise my wife with tickets to see Alice Cooper in Augusta for our anniversary. Even sweeter that after she spent many months recovering from a bad car accident that I could look at her and say – “After two years of hell, we are gonna celebrate your recovery by spending the night with Alice Cooper!” According to her, it was perfect. And a big thanks for that has to go to Alice and his killer band. 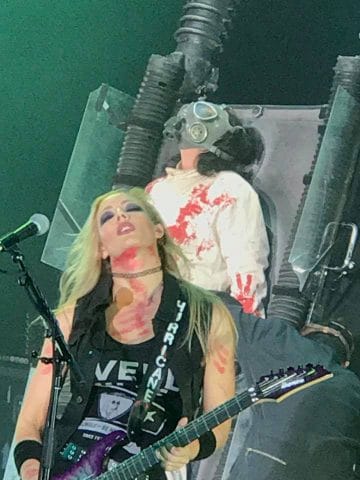