AN EVENING WITH THE SHOCK ROCK MASTER — ALICE COOPER

I have seen Alice Cooper play live numerous times (eight by my count including in 1988, 1999, 2007, 2010, 2012 (twice) and 2014) and I always leave his concerts feeling that I got my money’s worth and was thoroughly entertained. Alice Cooper is the kind of artist that I do not need to check the setlist for because I know he’ll play as many of his classic tracks as possible while throwing in a few song surprises (which I will most likely know), especially if he is headlining. 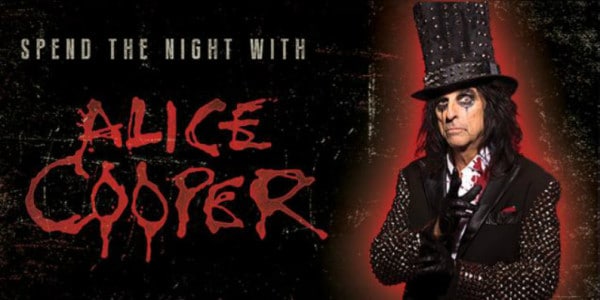 It wasn’t difficult to get my friend The Meister (of Decibel Geek) to agree to come with me to see Alice Cooper at Casino Rama, especially since The Meister lives much closer to the venue than I. I had good intentions to leave home with a little extra time to make the two hour or so trek to get to the venue (with a short detour to pick up The Meister) but instead left at about 6:10 pm meaning that I would have to make up time to get to the venue as the doors supposedly opened at 8:00 pm. A few wrong turns later and about an hour later, I picked up The Meister who advised me that the doors to the venue were actually opening at 7:00 pm with Alice Cooper going on at 8:00 pm sharp. I had apparently been under the mistaken assumption that the doors would open at 8:00 pm with Alice going on sometime later. It had been a couple of years since I had seen a concert at Casino Rama with the last one dating back to the Geoff Tate led Queensrÿche back in June 2013. Clearly, I had forgotten the rather strict timelines that the venue adheres to.

The Meister also advised that it would take, without fail, an hour to get to Casino Rama from his home. With the clock already at 7:11 pm, I knew I had my work cut out to get to the venue. Despite driving even faster than I usually do, we did not gain that much time on our way to Casino Rama, which is nestled in no man’s land (from the perspective of someone who lives in a city with millions of habitants). By the time we got to the venue’s parking lot, it became apparent that it would be very difficult to find a parking spot in the definitely too small parking lot. It almost felt like I was just abandoning my vehicle as I left it in a make shift parking spot that I created after frantically searching for a parking spot. A quick jog to the venue and we were able to pick up our tickets at the box office before unfortunately hearing “No More Mr. Nice Guy” in the background.

By the time we got to the venue’s entrance, Alice Cooper had already started and I thought that we might have missed two songs. The good news about Casino Rama is that usually no matter where your seats are (or at least if your seats are in the lower section closer to the stage) in the venue, you can make your way to the front of the stage and stand in a general admission type area between the stage and the first row of seats. Of course, not all of the 5,000 capacity audience attendees (assuming a sold out show) can attend in the make shift general admission area so arriving almost ten minutes late meant it would be difficult to access the general admission area. This turned out indeed to be the case with one side of the general admission area apparently completely full. At first, I didn’t understand why since there seemed to still be some room between the people standing and the first row of seats but I eventually noticed some sort of line on the ground marking where the general admission area ended. Naturally, there were also security personnel patrolling the area whose only objective seemed to be to remove anyone that was standing behind the line in question. Nevertheless, The Meister and I were able to “force” our way into strategic spots in the general admission area. This was also the closest that I had ever been to Alice Cooper at a concert. 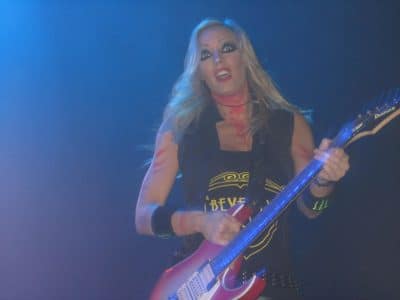 Until I started writing this review (a little late I will admit), I was under the impression that The Meister and I had only missed two songs (“Welcome To My Nightmare” and “No More Mr. Nice Guy”) so I was not heartbroken by any means in missing those two overplayed songs. However, as I pulled the setlist from setlist.fm, I was horrified to see that “Public Animal #9” from arguably Alice‘s best album School’s Out was one of the songs that I missed so now, I am even more disappointed with our late arrival. We must have been in the process of finding spots in the general admission area because I do not have any recollection of hearing “Under My Wheels.” After “Is It My Body” and the obligatory “Billion Dollar Babies”, the concert started getting even more interesting for me since I could not believe my ears… “Long Way To Go” from the Love It To Death album! I never thought that I would hear that one live! What a treat! While I have always loved the song, it did not seem to have the same punch in this live setting. Nevertheless, for a vintage Alice Cooper fan such as myself, it was simply unexpected and awesome to be able to hear that track live! 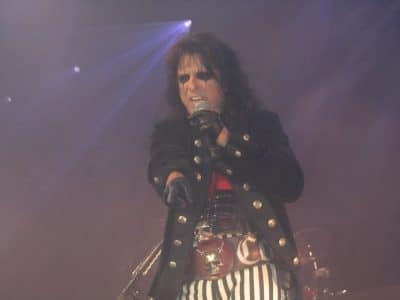 Next up was one of my favorite Alice Cooper songs from “recent years” — the very good “Woman Of Mass Distraction” from the very underrated Dirty Diamonds (although the album did not go unnoticed by Sleaze Roxx landing at the #4 slot of the Sleaze Roxx’s Top Ten Albums of 2005). It was fun to see Alice Cooper interact with his newest guitarist Nita Strauss especially during that song but also during the rest of the concert. My friend The Meister noted after the show that Alice Cooper did not seem to have that same relationship onstage with Strauss‘ predecessor Orianthi and I have to agree with him in that regard. The luxury of having there guitarists in the line-up is that sometimes one of them does not have that much to play which gives that person the opportunity to run around, pose or whatever they want to do. Strauss certainly took full advantage in that regard and covered a lot of ground on stage. The great tracks kept on coming with the sing along classic “Poison” and one of my all-time favorite Alice songs “Halo Of Flies.” A few more tracks (“Feed My Frankenstein,” “Cold Ethyl” and “Only Women Bleed”) were played that are not my favorite Alice Cooper songs by any means but work so well for Alice Cooper‘s story telling onstage.

Before long, it was back to a deeper cut with this time the song “Guilty” from the Go To Hell album. Yet another track that I never 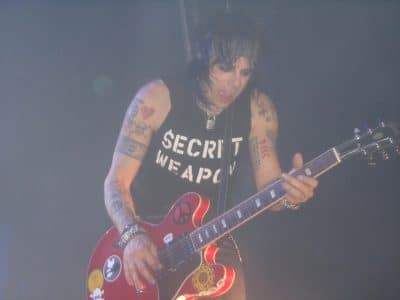 thought that I would hear live from Alice Cooper. What a treat! The great song choices did not stop there with another favorite Alice Cooper song of mine — “The Ballad Of Dwight Fry.” From then on, I was expecting Alice to close off the evening with the usual suspects including “I Love The Dead,” “I’m Eighteen” and “School’s Out.” Of course, those songs were played and in fine fashion with the latter two getting what seemed like a massive sing along from the audience. However, what was more of a highlight was Alice Cooper paying tribute to some of his fallen comrades such as The Who‘s original drummer Keith Moon, guitarist Jimi Hendrix and the one and only David Bowie. Alice Cooper‘s covers of “Pinball Wizard,” “Fire” and “Suffragette City” were damn good! 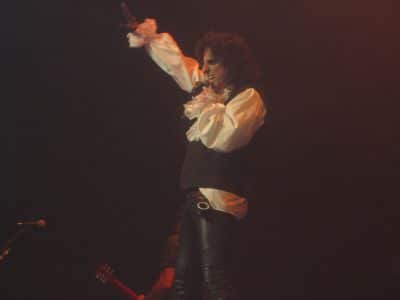 There are so many things to love about an Alice Cooper live show. From Alice bringing a crutch when he is singing “I’m Eighteen,” to big balloons floating in the audience (during “School’s Out”) which Alice pops with a sharp object if they venture close to him, to soap bubbles from what I recall being blown onstage (during “School’s Out”), to two people “disguised” as Donald Trump and Hilary Clinton doing what appeared to be lewd acts (during the encore “Elected”), there is always so much to visually take in while listening to some great music. One part that I have always loved about Alice Cooper is that even though he stays in stage persona for the entire show, towards the end of the evening, he takes the time to introduce his all-star cast of musicians while introducing Alice Cooper as “me.” And what an all-star cast that Alice has! Drummer Glen Sobel (who pinched hit for Tommy Lee during a few Mötley Crüe shows back in October 2015); guitarists Ryan Roxie, Tommy Henriksen and Strauss; along with long-time bassist Chuck Garric (who was looking particularly buff) are all accomplished musicians that add that extra layer to the show.

Considering that Alice Cooper is currently 68 years old and even though he shows no signs of slowing down from what I have seen, the reality is that he won’t be touring like he does forever so I was really glad to catch one more headliner set from the shock rock legend on this night! 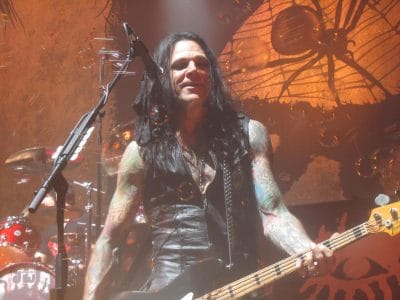 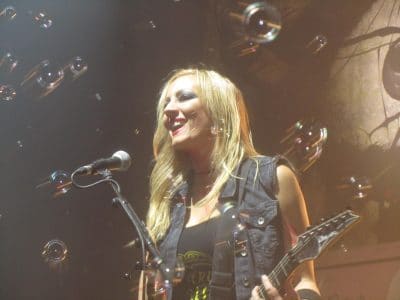