ROUND II — ANTHRAX AND KILLSWITCH ENGAGE 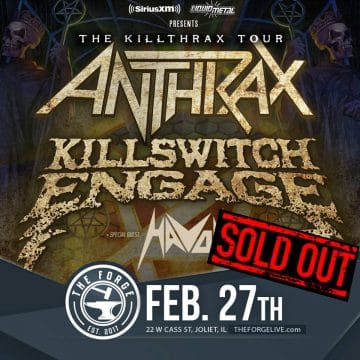 I want to start by saying yes, I’m glad I’m here covering this sold out show featuring Anthrax and Killswitch Engage in the small venue of The Forge in Joliet, Illinois. At the same time, I don’t understand why these two bands would want to play this venue when there’s many other venues with larger stages with more room to move around on. The Forge has a stage set up with the two main structure beam supports on the right and left of the stage but also in the middle, which is enough of the stage to cause problems including hindering any proper stage movement from a band such as Anthrax and hell, pretty much most bands. I was curious on how Scott Ian was going to do his famous war dance and then jump on the mic with the dam beam in the way.

Last March, when I covered Anthrax, I thought they were lights out at Arcada Theatre. They just killed it and my anticipation to see how they would do once again on this night was up there. I’ve seen Anthrax more times than I can even count starting in late ’80s and I’ve only been disappointed once at one of their concerts. That was back in May 2008 at the Double Door when they bombed with Dan Nelson as the singer. I only went because I wanted to see what Anthrax were trying to do without Joey Belladonna who is Anthrax in my eyes and always will be. I’m a John Bush and Armored Saint fan but when John was in Anthrax, I was one pissed off Anthrax fan. They did some great work with John Bush playing killer shows but yet, I never considered it Anthrax. Let’s just say, I’ve been a happier Anthrax fan ever since 2010 when Joey Belladonna came back into the picture. The resurrection of Anthrax came from the release of Worship The Music album in 2011, which was by far one of the best albums. To come back in 2016 with the album For All Kings, that was even better than Worship, was amazing. Both these albums that they released raised the bar for the other Big 4 bands in my opinion. Anthrax have put out the better albums out of the Big 4 bands in the last 10 years.

Killswitch Engage rose to fame with their 2004 release The End Of Heartache and have been a force to be wrecking with since. The band formed in 1999 with singer Jessie Leach but then Leach left the band in 2002 and he was replaced by vocalist Howard Jones. Jones is who I saw singing the last time I saw Killswitch Engage but as time goes by, Killswitch Engage found themselves singer-less for a second time in 2012. Leach was full of piss and vinegar to reclaim what was once his spot. Jessie Leach proved that he can take the role as lead singer and continue as a forceful one, and here I was getting ready to see them in action tonight.

The crowd was filling in as the thrash metal band Havok from Denver started to get this crowd warmed up. Havok are a high energy band that had this crowd going early. They are great musicians with some technical nuances, which is why these guys are the younger thrash metal bands that will carry the torch going forward. Havok definitely won this crowd over and gained some new fans, as they just  primed the crowd while waiting for Killswitch Engage to take the stage.

This co-headliner tour has Killswitch Engage playing second and Anthrax headlining on this night. I love this tour for the simple reason the crowd is so mixed full of older people and younger people. It’s great to see. The lights went out and the crowd 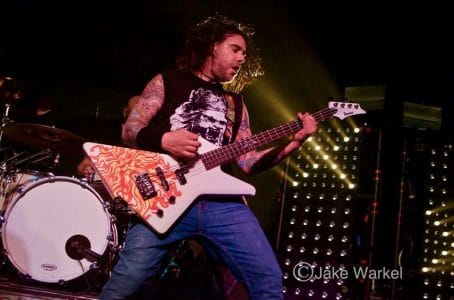 was ready for a great night as Killswitch Engage blasted the stage right off the bat starting the night with an old favorite “Rose of Sharyn.” Also out of their 17 song setlist of old favorites were “My Last Serenade,” “Hate By Design” and “The End Of Heartache.” Jessie Leach commanded the crowd with his stage presence back and forth all night. Adam Dutkiewicz was crazy on guitar all night jumping around with his knee brace on and at one point, he decided to sneak out into the crowd and play guitar, which seemingly had some of his road crew leary about that decision, but at the end of the day the fans loved it. To finish the night off, Killswitch Engage played an a amazing cover of Dio’s “Holy Diver” featuring Joey Belladonna to close their set. Having Joey come out and sing that song was so perfect.  The crowd was rowdy and moshing it up with some bodysurfing of course and I expect more of the same when Anthrax would take the stage next. 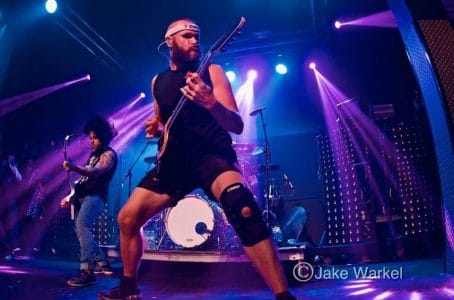 Killswitch Engage performing Dio’s Holy Diver with an appearance of Joey Belladonna of Anthrax. Joliet IL @The Forge 2.27.2018 Killthrax Tour – nothing be…

Iron Maiden‘s “Number Of The Beast” was now playing, which meant it was almost time for Anthrax to take the stage. In regular fashion, “I Can’t Turn You Loose”, the song by The Blues Brothers started playing. It has been one of Anthrax’s 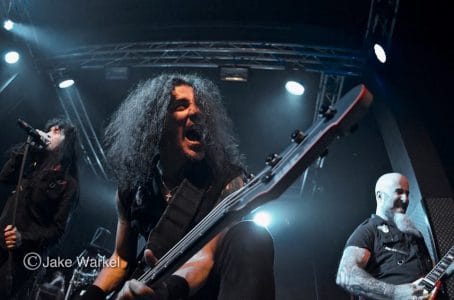 staples before the band members run out on stage. What made this so perfect was that Anthrax were actually in Joliet for the first time where Joliet Jake spent his time in the big house in the movie Blues Brothers.  Joey Belladonna and the guys came out in full force crushing their classic “Among The Living” followed by “Caught in A Mosh” which had this crowd body surfing and moshing without hesitation.  Frank Bello is like the energizer bunny. The guy is just killer. Most likely wish they could move and have that constant day in, day out, adrenaline to own a stage like Frank.

Anthrax’s setlist was full of classics other than two songs on the night — “Fight ‘Em ‘Til You Can’t” that was the first single from Anthrax‘s 2011 album Worship Music and the second song “Breathing Lightning” which was the first official track from the group’s latest album For All Kings. All night, Joey Belladonna was interacting with the fans in the crowd, to the sides of the stage, in front of the stage and also towards the balcony. Charlie Benante was his usual killer self on drums here in his home state. Johnny Donais was fluent and slick like he wasn’t even there. Johnny is a great guitarist and makes it look so easy but he’s a very quiet guy. Scott Ian did take to the 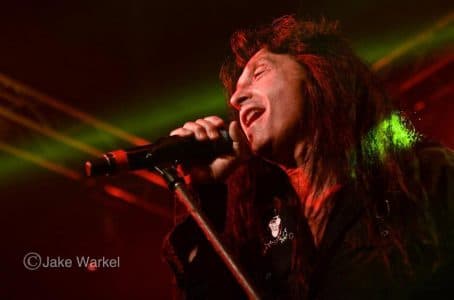 microphone to point out during the show how cool it was playing here in Joliet when The Blues Brothers‘ intro song mentions Joliet Jake and the movie is based out of this area. While Scott Ian was on the microphone, Joey was like a little kid throwing stickers into the crowd and guitar picks. On this night, we had no encores but Anthrax finished their set with three strong songs —  “Be All,” “Anti Social” and “Indians” to finish the night.

The fans were definitely leaving happy other than two that I witnessed getting thrown out earlier. One of the guys that got thrown out was a gentleman in his mid ’50s who was tossed out halfway through the set and yes, he started crying. I can’t make this shit up but he started to flat out cry once he realized he couldn’t talk his way out of getting the boot.

The only disappointing part for me was Anthrax only played 11 songs as the headliner tonight, which flew by so fast. Anthrax is one band I never can get enough of. For a band that has been around as long as they have and are as old as they are, no one can touch them, when it comes to larger than life stage presence. Their non-stop in your face energy and craziness keeps you so involved and wanting more. That’s what happens when you own the crowd. 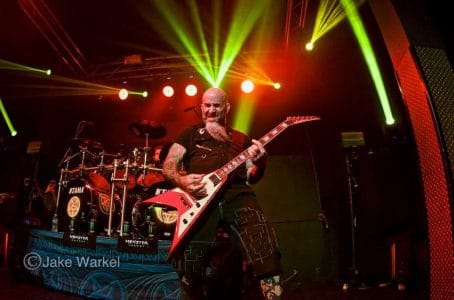 Anthrax will be back here in the Chicago area with Slayer on May 25th at the Hollywood Casino Amphitheatre in Tinley Park so make sure you pick up your tickets for this show and all Anthrax shows near a city near you.