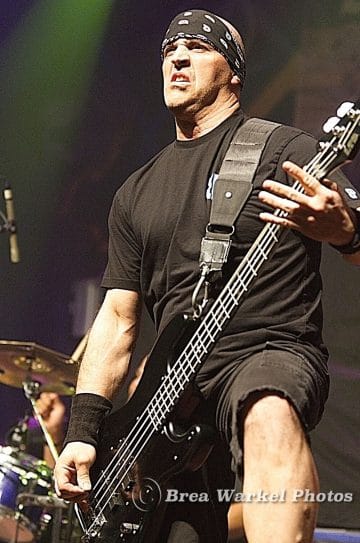 Anthrax came to thrash the Western suburb of Chicago — St Charles — and brought along with them Sworn Enemy. Both groups are New York based bands that love to thrash. As for Anthrax drummer Charlie Benante, he’s only about a 45 minute drive from the venue so it was like his hometown crowd that he would be playing for. The fans I spoke to during the evening were definitely glad Anthrax were playing for the first time here at Arcada Theatre. The lone exception was Anthrax singer Joey Belladonna who had the pleasure to play here for crazed fans back in May 2011 with his solo act. Considering Anthrax’s main fan base lives in the surrounding suburbs of Chicago and most said they preferred this drive rather than dealing with the city traffic, it sounded like a win for everyone.

The only difference between Arcada Theatre to other venues is that the Arcada Theatre has seats throughout the venue, which Anthrax and their fans aren’t accustomed to. Empty floor venues with no seating except balconies are what Anthrax and their fans have been accustomed to for over the band’s 35-year career unless of course they were playing an arena. It seemed that the Anthrax band members were a bit weary when they entered the venue for soundcheck once they saw all the seats. But they weren’t the only ones weary as fans, security guards and Ron Onesti, the owner operator of Arcada Theatre, were likely wondering the same thing. Well, we would see what would happen shortly as we were moments away from Sworn Enemy taking the stage. Funny enough, as Sworn Enemy were about to take the stage, I could hear people in the crowd talking about how there wouldn’t be many chairs left after this show if you know what I mean. 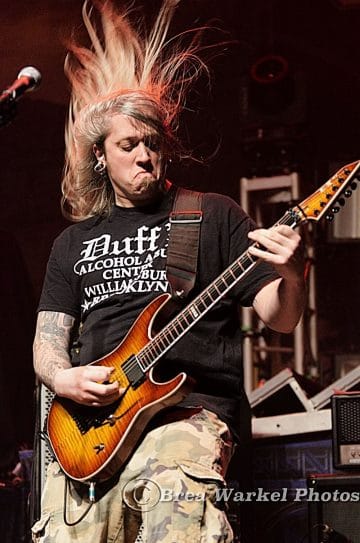 Well, Sworn Enemy sure knew how to take the stage with their head banging, full out, hardcore punk, heavy metal thrash at its finest and that was one song in with “Sworn Enemy,” the first track off their As Real As It Gets album from 2003. Sal Lococo just overtook the stage with his growls and heavy aggression that made you get caught up in the “I want to destroy something” feeling. This worked well with the second song “Destroyer.” “The Beginning Of The End” saw the band playing more thrash metal than the older hardcore punk sound from the prior songs played on this night.”All I Have,” “Absorb The Lies,” “Here Today” which were all from The Beginning Of The End album released in 2006 definitely made a statement on this night. No chairs had been destroyed yet but you could tell the crowd wanted to.

“Never Forget” had a breakdown at the end that was brutal with so much power. “Place Of Solace” is where I hearing the Slayer sound from Sworn Enemy. “These Tears” is a song which brought people back to Sworn Enemy’s hardcore days. Next up was the track “As Real As It Gets”, which was used in the film, The Texas Chainsaw Massacre (the 2003 remake). The song was right to the point, very direct with aggression and passion for what these guys do. “Scared Of The Unknown” and ”We Hate” were the last two songs played from Sworn Enemy‘s set. If you noticed, most of the songs played in this night were off Sworn Enemy‘s The Beginning Of The End album. Something tells me that lead singer Sal feels that this album still holds up especially for a live performance as this album was the band’s main crossover from hardcore to thrash metal. At the end, I felt Sworn Enemy tore up the stage on this night with a great performance and killer solos and they engaged really well with the audience through their conviction to perform with great 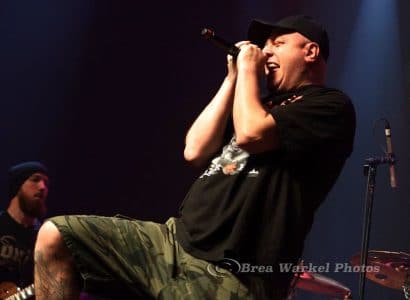 The Anthrax fans were getting restless and looking forward to a great night which so far started out awesome with Sworn Enemy. Four of the five Anthrax members came out starting “Among The Living” and just before the vocals started, Joey 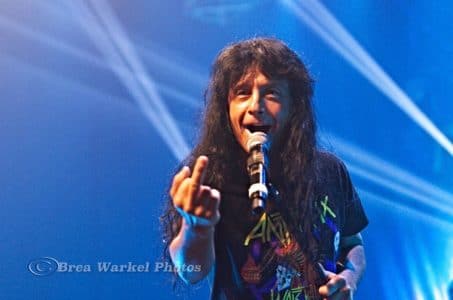 Belladona came out crashing onto the stage running back-and-forth and really revving up the crowd. There were still no chairs being thrown around or destroyed so no one would be “Caught In A Mosh” on this night but fans didn’t seem to care as they were thrashing around with themselves in their seats with the others around them. As far as I am concerned, there are no bad Anthrax songs but my one favorite “Madhouse” fucking destroyed! No matter how much I’ll always miss Dan Spitz in Anthrax, Jonathan Donais — who replaced lead guitarist Rob Caggiano who had replaced Paul Crook who had replaced Dan Spitz — delivered justice to all the old Anthrax tunes as well as the new. Jonathan Donais definitely adds to Anthrax as far as his guitar ability. It brought new life altogether to the band in my opinion.

Joey‘s return to Anthrax in 2011 saw the band record one of its best albums Worship Music, which was Joey‘s first studio album with Anthrax since 1990’s Persistence Of Time. The group’s fourth song of the night “Fight ‘Em ’Til You Can’t” was from Worship Music and you could hear Scott Ian belting out backing vocals from hell. The fans old to new were singing along loving this heavy tune that seemed to have elements of three songs in one but is assembled together so well. One of Anthrax’s most 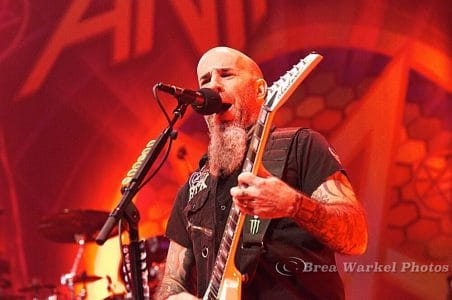 popular tunes was “I Am the Law” which is based from Judge Dredd, the comic book character. There were fists clenched and head banging all around at the moment as the fans definitely are amped up. Anthrax’s energy just drove the fans to be crazy. Finally, a song off their latest album For All Kings was played and which has a definite commercial chorus feel to it but it’s actually a good tune that has a more mellow vibe than most Anthrax songs. “Breathing Lightning” had a great solo from Jonathan Donais. The blood pumping fan favorite “Medusa” from Anthrax‘s sophomore album Spreading The Disease just ripped with Joey’s vocals. It’s not only on this song but the others as well as Joey still has powerful vocals after all these years.

The face punching “Evil Twin” off Anthrax‘s newest album For All Kings destroyed this crowd, proving the band gets better with age. Up next was “March” which usually creates a mosh pit but not tonight as the seats were still intact. This led into “Blood Eagle Wings.” Again, a song from the new album For All Kings. I was glad to see them playing some of the newer songs well as seemingly the rest of fans on this night. “Antisocial” with that great intro with Scott Ian’s chunks on guitar was next and this tune always brings back memories of when they played tons of arenas while being the opener for Ozzy. Seeing Anthrax at the once called Rosemont Horizon with Ozzy was the first time I saw Anthrax in an arena atmosphere, which was cool but not as cool as all the years I’d seen them play prior at the Aragon “Brawlroom” Ballroom in Chicago.

Diverting from their setlist onstage, Anthrax then went straight into “Be All End All” another great tune from the State Of Euphoria album. The stage energy so far had been intense. Anthrax finished the song and exited the stage but we all knew with some Anthrax chants, they’d be back out for us fans. Anthrax surprised most the crowd with their first encore song choice “Neon Knights” from Black Sabbath, which paid tribute to Ronnie James Dio. It didn’t feel like it as the song did not seemingly go over well for this crowd on this night as this was seemingly the most disconnected the fans were all night with the band. Anthrax performed the song well but should’ve played “Efilnikufesin (N.F.L.)” or really anything else probably would have worked better.

The last song “Indians” was by far the biggest concert favorite but minus the war dance and with the venue’s chairs all intact surprisingly enough. Scott Ian thanked the sold out crowd and said he loved the venue as well. He thanked the fans for the loyal 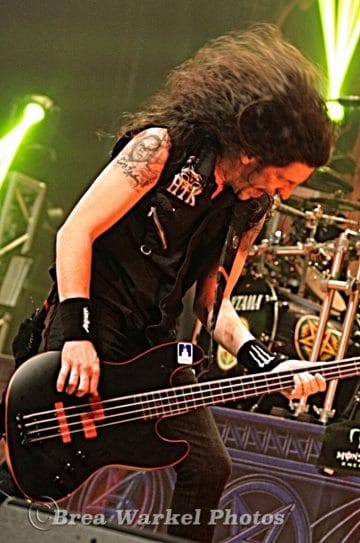 support and expressed surprise that they’d never played Arcada Theatre in their career. Scott added that they would have to come back and play here again.

The show overall was outstanding as usual from start to finish. Frank Bello did what he always did, which was run around like a madman engaging the fans and killing it with backround vocals and bass playing. The guy never stops! He’s like the metal version of the energizer bunny. Jonathan Donais was great on guitar as jokingly, Charlie Benante started playing the drum intro for Van Halen’s “Hot For Teacher” as Jonathan Donais tried his best playing the intro guitar lead but that quickly ended. I was glad to see that the Anthrax band members are still trying to have fun onstage. Jonathan Donais is maybe not a flashy engaging performer but he’s a solid talented guitar player with great chops and seems a perfect fit for Anthrax.

Joey Belladonna fucking always seems to be enjoying himself onstage making fans feel like they are friends of his with a lot of back and forth interaction from the balcony to the main floor. Joey was everywhere all the time. It’s never a boring time with Joey onstage killing it on vocals. Charlie Benante, who seemed to have many of his people there on this night, played the shit out of his drums as always. Charlie’s drumming always amazes me every time I see Anthrax. Scott Ian — yes, the man in charge — definitely always brings that mean edge hard hitting riff rhythm guitar to the table. There wasn’t as many instances with Scott stomping but there were some moments. I’m looking forward to see Anthrax again this year at the Open-air Festival in Chicago this coming July 2017. 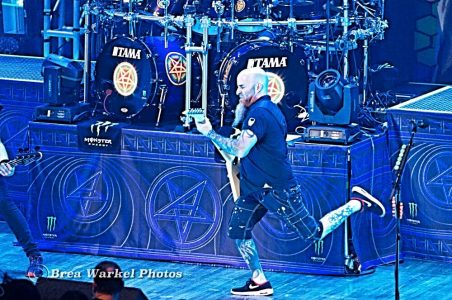