ARMORED SAINT MARCH THROUGH THE WEST COAST AND ‘WIN HANDS DOWN’

The last time Armored Saint played in Portland, Oregon was in 2001 when the band opened for Ronnie James Dio on the ‘Magica’ tour. Armored Saint were promoting their 2000 reunion album Revelation which garnered favorable reviews. Armored Saint rolled into Portland on June 11, 2016 for the last stop on their co-headline tour with Seattle metal act Metal Church. I was really looking forward to seeing both bands and especially after recently interviewing both Armored Saint‘s John Bush and Metal Church‘s Mike Howe. To say that this was a fantastic pairing would be an understatement. 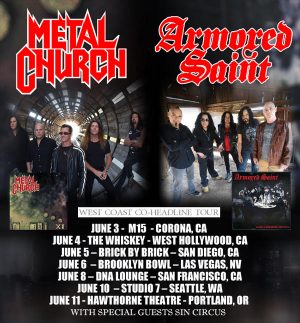 The So Cal metal vets opened with the title track from their new album “Win Hands Down” which surprisingly the audience knew and sang along to. Also featured from Win Hands Down was “Mess” and “An Exercise in Debauchery” which much like the title track, people seemed familiar with. Armored Saint issued their latest effort Win Hands Down on June 2, 2015 which is a stronger and more consistent effort than its predecessor 2010’s La Raza.

The guys in Armored Saint are middle age at this point however; you wouldn’t know it based on their appearance and the amount of energy generated by them as collective unit. John Bush controlled the stage not stopping unless it was to work up the crowd or introduce the next song. Guitarists Jeff Duncan and Phil Sandoval were all smiles as they grinded away on their guitars the entire show. They seemed to not even break a sweat. Bassist Joey Vera, much like Bush, was an unstoppable force on the stage. How he didn’t crash into Bush is unexplainable. Drummer Gonzo Sandoval was a sight to be seen and heard as he hammered away song after song with each bombastic swing of his sticks.

No question that Bush and company were pleased to see the near capacity audience jam packed into The Hawthorne Theatre like matchsticks.

The highlights and there were many include “Win Hands Down,” “Long Before I Die,” Tribal Dance,” Last Train Home,” “Reign of Fire” and “Mess.” The band closed with “Can U Deliver” and “Mad House.” During “Can U Deliver” and “Mad House”, Metal Church singer Mike Howe, bassist Steven Unger and guitarist Kurdt Vanderhoof came down the side of the stairs to catch the action. Howe sang along and headbanged to the aforementioned songs. It was a sight to see and a sign of respect and brotherhood.

The only additions to the set that would have made it perfect for this writer would have been the additions of “Raising Fear” and “Chemical Euphoria.” However, it’s been 15 years since I last saw Armored Saint so to complain about the setlist after such a magnificent show and energetic performance by Armored Saint would be blasphemous.