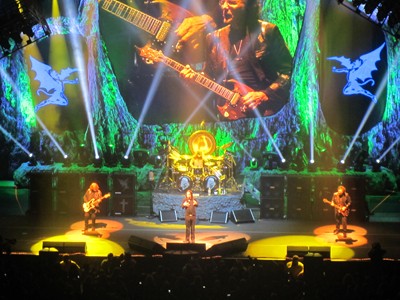 BLACK SABBATH AND A DJ

Sold out… that is how Black Sabbath‘s show in Toronto had been for months and months in advance, and I suspect within minutes of the tickets going on sale. I am not counting the “VIP” packages that were selling for about $1,000 (from what I can recall) — and surprise, surprise — there were still some of those packages available a few days prior to the concert. Black Sabbath‘s popularity was not good for me, since I had not bothered purchasing tickets right away when they first went on sale. Luckily, my friend Chris came through again with some tickets in the week preceding the concert — thank you American Express!

Before the mighty Sabbath appeared, opening act Andrew W.K. was taking the stage. I had heard that Andrew W.K. was opening all of Black Sabbath‘s North American tour dates, but knew nothing about — and did not bother finding out anything — about him. The pleasing familiar sounds of Judas Priest‘s “The Hellion” started playing and I thought, ‘interesting’ — as Andrew W.K. was starting with a cover song. However, upon closer inspection of the stage and to my dismay, Andrew W.K. was a DJ! Apparently, he would be “spinning”, or essentially playing some classic rock/metal tunes, for the incoming crowd. Frankly, this was very disappointing. I really heard no difference between songs emanating from the Air Canada Centre’s PA system and songs chosen by the DJ. The latter did have a little station lit up in a light blue color and he appeared to be throwing some free t-shirts from time to time. It would have been really nice for Black Sabbath to take a young band, or even a veteran act, along to open the show. Providing a DJ as the opening act was a major faux pas. By the time that DJ Andrew W.K. “spun” his third song (if you count Judas Priest‘s “Hellion” as a song), Motley Crue‘s “Shout At The Devil”, my interest in the opener had vanished and I went back to enjoying the tasty treats and fine beverages that the corporate box had to offer. When Andrew W.K.‘s DJ set finished, the Air Canada Centre’s PA system went back to playing some classic rock and there was no difference from where I was seated.

I long for the bands that are not afraid, hesitant or bypass taking on some of the hottest new bands as their opening acts. I think back to 1987 when I saw Motley Crue on their ‘Girls Girls Girls’ tour with red hot Whitesnake opening the show even if the latter had a number one hit single with “Here I Go Again”. Or how about Iron Maiden on their ‘Seventh Tour Of A Seventh Tour’ in 1988 with Guns N’ Roses opening? Or even on a lesser scale, how about the reformed Killer Dwarfs‘ upcoming show in Toronto with sleaze rock sensation Diemonds as opener?

By the time that Black Sabbath took the stage, after the crowd could hear frontman Ozzy Osbourne‘s familiar voice getting the crowd pumped up from behind the curtain, everything was forgotten about opener Andrew W.K. — well almost everything! Black Sabbath opened their show with the classic “War Pigs”. A great song that seemed to have just about everyone familiar with the band singing along (including me) from the time Osbourne started singing the first few words “Generals gathered in their masses…” The stage lights and background screens looked amazing, especially from the vantage point of the corporate box all the way up almost into the rafters. The band as a whole sounded tight — and no offence to Bill Ward, but drummer Tommy Clufetos did such a great job that Ward really was not missed in any way. Sabbath dug into their vault playing slightly more obscure songs, which were not included in their last ‘Greatest Hits’ compilation with Ozzy, such as “Into The Void” and “Under The Sun”.

There were a few funny moments during the show, such as when Osbourne introduced the fourth song as “Age Of Reason”. Guitarist Tony Iommi then approached Ozzy to presumably tell him the next song to be played was actually “Snowblind”. The frontman then apologized to the crowd, complaining that he could not make out what was written in terms of the song order. No problem Ozzy… shit happens! It then seemed like Iommi would be approaching Osbourne whenever the frontman would announce the next song but apparently Ozzy got it right every time after his first and only mishap.

Black Sabbath played three new songs off their new CD ’13’ — “Age Of Reason”, “End Of Beginning” and “God Is Dead?”. Pretty amazing to think that it took Sabbath over forty years to achieve their first number 1 record! I found that all of the new songs fit really well with the rest of the classic era tunes. Normally I would have stated that playing only three new songs is not that many. However considering the length of the new songs, with two them clocking in at over eight minutes each and that there are only eight songs on the new Black Sabbath‘ record, the amount of new material was just right.

Most of my favorite Black Sabbath tunes were played including “N.I.B.”, “Iron Man” and “Fairies Wear Boots”. Although Osbourne‘s voice was quite good throughout the whole evening, it did seem that on “Dirty Women” he was singing at a lower pitch than what the original song sounds like. Sabbath closed their set with the awesome “Children Of The Grave”. In vintage form, Ozzy promised that the band would play one more song if the crowd went “extra, extra crazy” — or something like that. Black Sabbath came back for essentially one encore — the intro riff to “Sabbath Bloody Sabbath” followed by “Paranoid”.

I must say that it is a different experience being in a corporate box high in the rafters rather than a few feet from the stage. I could not tell from the box how engaged the crowd really was but other box attendees commented after Black Sabbath‘s set that this was the most engaged crowd they had ever seen at the Air Canada Centre. Thank you Black Sabbath for a great show — very impressive for three guys in their mid-60s! Come back again soon, but bring a live band as an opening act next time. 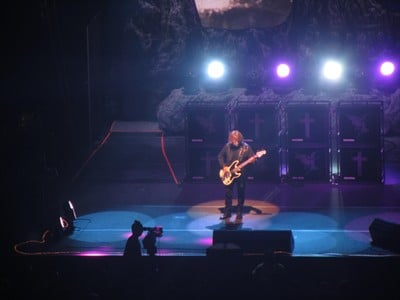 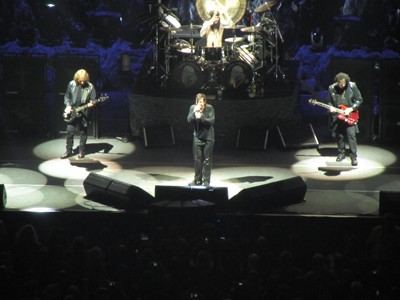