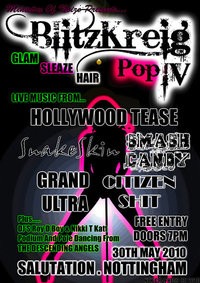 Blitzkrieg Pop, the brainchild of DJ Roy Da Boy, returned for its fourth offering of all things sleazy at the Salutation Inn in Nottingham. With bands straight out of the sunset strip, circa 1984, this night has been slowly gaining a reputation in the sleazy undercurrent of the Nottingham rock scene.

When I arrived, a few things whetted my appetite for the night of debauchery ahead. There was a pole, a podium, all the guys and girls looked the part, and there were scantily dressed pole dancers mingling with Nikki Sixx wannabes. It was like stepping into a Motley Crue video. This is what the glam scene was all about in the 80s, and Blitzkrieg Pop seems to be dragging it kicking and screaming into the 21st century.

So, with beer in hand, it was onto the bands. First up, we had the most hated band in Nottingham, Lippstikk. These 4 young men have no pretences about what they’re here for — they’re here to get drunk, spit in your face and kill your dog. Having only reformed three hours before the gig, they remind you of the T1000 ‘Arnie’ had so much trouble killing in Terminator. No matter how many times you try, Lippstikk always reform. They’re sloppier than a 1980s porn flick, and completely enjoyable. By the time they had finished on a cover of the Pussycat Dolls “Don’tcha” (Yes really!) Blitzkrieg Pop was off to a good start.

After a bit of dancing from Nottingham pole/podium dancers Descending Angels — four very talented, sexy young ladies who do tricks that are definitely not for kids — we had our next band, Grandultra, a hard rock group from Nottingham. This young band are something special. Still young, and slightly inexperienced in the live arena, they have huge potential. In Joe Hill they have a strong frontman, and you get a feeling they haven’t reached their potential yet. My only criticism is that the guitarist should move about more on stage. However, with a bit more work, they could be carving a place for themselves in the rock scene in the near future

Next up, we had SmashCandy, again, local to Nottingham. Remember what was dangerous about the sleaze rock scene? Well, just go see these guys and they’ll show you it’s not dead. Taking the attitude of early Crue, crossing it with a bit of Zodiac Mindwarp, and then pouring petrol over the whole thing and setting it on fire, SmashCandy are here to get drunk, party hard and smash your face in.

The main support came from Snakeskin, local anti-heroes of all things Skid Row. Coming on like a bombing raid, they exploded onto stage with the energy and passion that has made them one of the brightest hopes to break out of the local scene. They have the attitude, the riffs, a frontman who oozes sex appeal, and they genuinely enjoy what they do on stage. They also pulled the largest crowd of the night, which certainly says something for them. Snakeskin are truly one of our best kept secrets.

And so, without further ado, the stage was graced by the headliners Hollywood Tease. Coming on strong with an energy that grabs you and doesn’t let go, this was balls to the wall rock, no ballads, no bull. With a truly unique performance by frontman Ashe Masters, who was obviously the lovechild of Dave Lee Roth and David Coverdale — he is a major selling point for the band. With the whole band leaping about on stage like a bunch of spider monkeys with a bag of crack, you get a feeling that these guys may just be one of the bands to save the UK glam scene. A great ending to the night, these guys were simply fantastic. Lock up your daughters – Hollywood Tease have arrived.

All in all, Blitzkrieg Pop IV was a great night, and a credit to the promoter. It was packed out, the leather was tight, the denim ripped and everyone stumbled out to carry on the party somewhere.