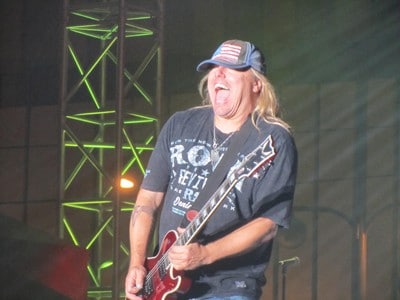 If you would have told me prior to my first trip to Las Vegas that my Top 40 dance music loving wife would be accompanying me to two hard rock concerts in three days, I would have bet against it 100%. Apparently, my betting senses heading into Las Vegas were completely off because after witnessing her first hard rock concert in our 16 and a half years together, my wife was surprisingly game to go see Bret Michaels two nights later, after first providing an easily defeated objection. It is quite obvious that KISS had a more favorable impression on my wife than she led me to believe.

After a very fun (for me) evening with KISS the night before (click here to read the KISS concert review), my wife and I were walking down the pedestrian walkway over the famous Las Vegas Boulevard towards the Cosmopolitan Hotel when we ran into a young man “wearing” a full body billboard sign displaying Michaels‘ face. As we passed the billboard wearing man, I received a little card advertising two for one tickets for a Bret Michaels concert the next evening. As it turned out, that was the only evening that my wife and I had not booked some sort of show in advance. The only legitimate objection offered by my wife was that we had a plane to catch at 11:55 pm on the day of the Michaels concert and we would therefore not be able to attend the show. That was a very fair objection, as even I expected that the Poison frontman would not go on stage until sometime after 9 pm. Nevertheless, I checked to see where Michaels would be playing and it turned out the DLV Event Centre was fairly close (by Toronto standards) — and lo and behold, he was scheduled to hit the stage at 7 pm! It also helped that my wife was actually familiar with Bret Michaels — not for his music, but mainly for his TV series Rock Of Love and his appearances on Donald Trump’s Celebrity Apprentice a few years back. 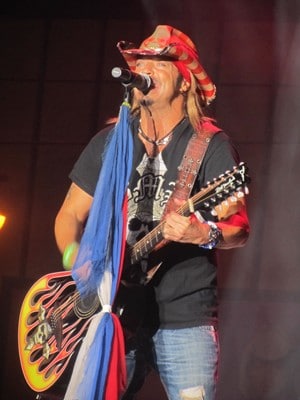 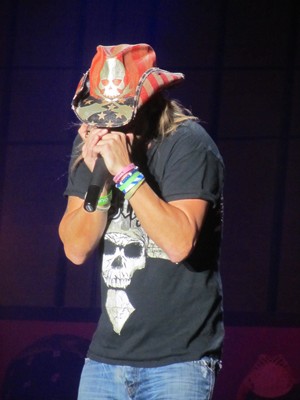 After a long, but very enjoyable, day checking out the spectacular Grand Canyon, my wife and I arrived back in Las Vegas just before 6 pm. Unfortunately, we had to forego eating supper to make it to the venue on time. This turned out to be a very small sacrifice compared to what Michaels had to endure on this night. The DLV Event Centre was advertised as an outdoor venue so I was very surprised to see that the place was smack in the middle of buildings including the Golden Nugget Hotel in Las Vegas’ downtown area. Apparently the DLV Event Centre can hold up to 15,000 people, but the way the venue was configured on this night I estimate that a few thousand people at most would have fit. I was impressed with the venue and would definitely go see another concert there in a heartbeat. Given the two for one tickets, we were able to get into the venue for the bargain price of $20 plus surcharges. We ended up standing in a large general admission area behind about 15 to 20 rows of seats. Ironically, we were closer to the stage than at the KISS concert two nights prior, except that two tickets to that event cost a whopping $347 with surcharges!

Although Michaels was scheduled to start at seven, he took to the stage half an hour later — to my wife’s dismay. I must say that the country tunes that were sometimes emanating from the PA system during that time were definitely not my cup of tea. Luckily, there were also a few rock tunes such as Van Halen‘s “Jump”, Warrant‘s “Cherry Pie” and Guns N’ Roses‘ “Welcome To The Jungle” to make the wait semi-tolerable. Finally, the proud venue owner came out to address the audience and it was only a matter of minutes until Bret Michaels and his band hit the stage. The evening started with guitarist Pete Evick and bassist Bad Boy Bart running across the stage opposite each other a few times before Michaels popped up on stage and introduced the night’s first song, and also the first one he ever wrote with Poison, “Talk Dirty To Me”. 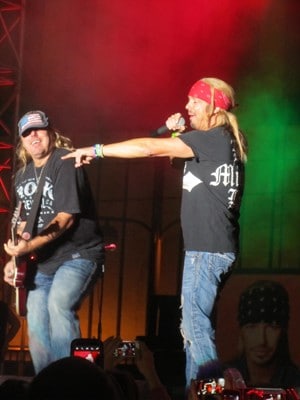 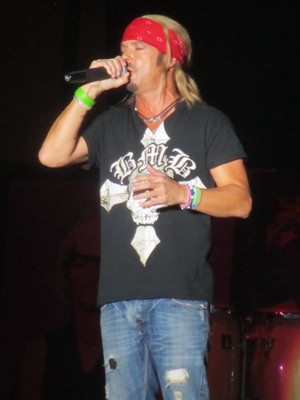 I have never been a big Poison or Bret Michaels fan, even after seeing the charismatic frontman star in his funny Rock Of Love TV show and win a season of Celebrity Apprentice, but after seeing him play live again — I had seen Poison on two previous occasions — consider me a converted Bret Michaels fan. The man definitely puts on a good show full of energy and he looked like he was really grateful and happy to be there. It has likely been over 15 years since I heard any Poison record in its entirety but their songs are so catchy and simple that I found myself singing along and knowing practically all the lyrics being sung. Given that I was not familiar with any of Michaels‘ solo stuff, I was very pleased with his setlist — which consisted of only well known Poison songs, including their cover of “Your Mama Don’t Dance”, and one Lynyrd Skynyrd hit.

At one point during the set, and after we and a number of others were let into the rows of seats in front of the standing general admission area, I felt a slight and odd little “punch” to my stomach. After briefly wondering what happened, I looked down at my feet only to find a guitar pick. It appears that Bad Boy Bart can flick picks a fair distance at a good amount of speed. This has to be what happened, since I later saw him flick another pick a far distance into the audience. 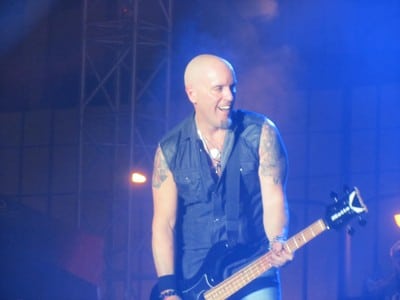 The most impressive thing about the night was when Michaels explained that he was a Type 1 diabetic and that he had just had an unexpected emergency kidney surgery a few days ago! He pointed out that he usually would be doing a lot more running around the stage but his recovery was slowing him down quite a bit. Had Michaels not advised us about his surgery, I would never have known that he was recovering from it because the man was constantly moving and strutting — as only he can do — all night long. There were glimpses that the frontman was suffering throughout the night, and at one point he indicated that it hurt when he reached up with one of his arms — something that he seemed to do repeatedly despite the pain. Eventually, the pain must have proved to be too much because after only six songs and an unnecessary, but entertaining, drum solo he announced that the band would end the night with some Poison hits. Shortly after, he strummed the first few notes of “Every Rose Has Its Thorn” on his guitar — not surprisingly, the only song that my wife knew — and I realized that the end was near. It turns out it was, since the show closer “Nothin’ But A Good Time” soon followed.

Despite the entire band putting in a very spirited performance during each song, the concert was over after only eight songs and one drum solo! This was the shortest set that I had ever seen from a headliner. Normally I would have been pissed off at such a short offering, but given the circumstances it was amazing that Michaels was on stage rocking away and putting on a stellar performance. He could have easily cancelled to take time to recover from his kidney surgery. Perhaps he did not want to let his friend (the venue owner) down, or wanted to proceed given that $5 of each ticket sold went to the Bret Michaels’ LifeRock Foundation. Whatever the case, it surely took a lot of guts and strength for Michaels to be able to pull off what he did for the hour or so that he played. Michaels was quite apologetic at the end of his set, promising that the next time he played here he would be “partying all night” with everyone.

Song highlights for me included show opener “Talk Dirty To Me”, probably my favorite Poison song “Look What The Cat Dragged In”, the spirited cover of Lynyrd Skynyrd‘s “Sweet Home Alabama” and show closer “Nothin’ But A Good Time”. Other highlights included hearing Michaels pay tribute to the men and women who serve and defend the U.S.A. and hearing about his Operation Homefront, a charity through which seven homes have been built for service members. Hearing about the singer’s charity work also gave my wife a new found perspective and respect for Michaels, and hopefully other rockers out there as well. Despite only hearing eight songs, I left the concert feeling satisfied and thinking that Michaels gave it everything he had on this night. As it turns out, reports have since come out that Michaels was hospitalized six times in a span of two weeks — which includes the time period of his Las Vegas concert. I wish Bret Michaels a speedy recovery and to take as much time as he needs to get better and come back even stronger. 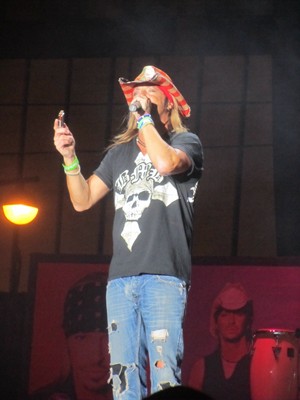 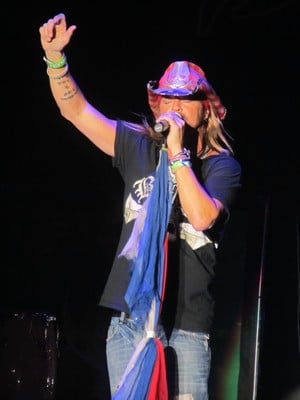