Akron Ohio, is the childhood home of NBA champion Lebron James and the current home of the Spirit of America Goodyear blimp, but for tonight’s purpose, the Goodyear Hall in Akron, Ohio played host to a who’s who of ’80s rock. 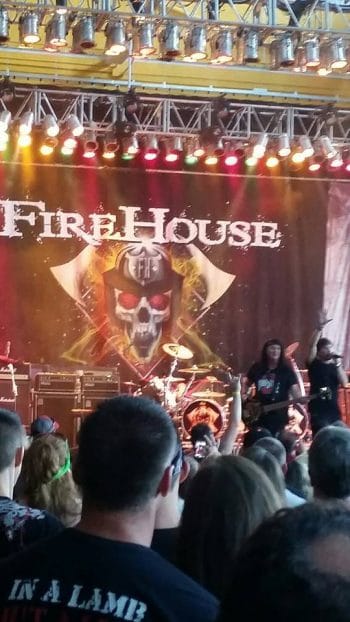 So Sunday night, the wife and I went to Akron, Ohio to see Firehouse, Warrant, Ratt and Brett Michaels at the Goodyear Hall. As usual, we were running late, so we only caught the tail end of Firehouse but it was still enough to determine the guys as always, put on a great show. Now, I have seen Firehouse over a dozen times in as many years and can honestly say this band is as tight as ever. I want to mention I think this band is underrated. Firehouse get lumped in with ’80s hair bands and don’t really deserve to be. Firehouse are often labeled a hair band or in some cases a glam band. I’m not sure why, as they actually didn’t really chart till 1991. In 1992, they were chosen as the American Music Awards’ Favorite Heavy Metal/Hard Rock New Artist over Nirvana and Alice In Chains. “Love Of A Lifetime” is probably the most memorable hit the band has and I’m sure it’s the number one wedding song of all-time. I have nothing to back up this claim — just a hunch. On to the next band. I find it neccessary to mention that the band is celebrating 26 years together this year and are still going strong.

I didn’t understand the order in which the bands played. Back in the day, Warrant and Poison toured together so one would think they (Warrant) would be direct support for Bret, but… I decided to hold my judgement till after the show. Warrant took the stage. I so badly wanted to sing along to all the songs I knew by heart — “I Saw Red,” “Song And Dance Man,” “Uncle Tom’s Cabin” — but I just couldn’t allow myself to though. I know that it was their take on these songs, but after working with my friend Jani (Lane) so many times, it just wasn’t right and of course, not the same. Still, Warrant did a good job though and the fans seemed to enjoy them. However, the sad part was the venue was so full it was extremely hot. After each band’s set, people would go outside to smoke and or cool off. I overheard a few of the concert goers talking about the band and somehow, even though they were in Akron Ohio, they didn’t realize that Jani Lane wasn’t the current singer and had in fact passed away five years earlier! I make reference to being in Akron, Ohio as that was Jani‘s last known residence. Overall, the band put on a good musical performance but lacked the emotion that Jani brought through his songs.

It was Ratt‘s — Bobby Blotzer‘s band really — turn to take the stage. Now at the request of someone who is close to the band and works with them a lot in LA, I was asked to give the new version of Ratt a chance… so I did… Now to interject a back story here — I’ve met Bobby before and have worked with [guitarist] Mitch Perry a few times back during his stint with Asia featuring John Payne, so I knew what to expect from them but the others I had never seen. With the exception of the aforementioned Blotzer and Perry who didn’t disappoint, I didn’t think the band was good at all! Bobby thanked the crowd of about 3,500 for allowing him to do his version of Ratt proclaiming that this is the “new Ratt forever.”

All the songs that Stephen Pearcy and the boys made famous were here in tonight’s performance, however it seemed like a mature night at a battle of the bands event. There was no real organization to the band. The music wasn’t charged with energy enough to take me back to the days I first heard Out Of The Cellar. In their defense, I must point out that this line-up has only been together for a few weeks according to facebook and other media sources. So give them some time, they may grow on us. My opinion is jaded having seen the original line-up as well as the line-up including the version with Robbie Crane. Here is something you might find interesting. Marq Torien was in the band Ratt, for a hot minute. Marq is of course famous for being the singer of the BulletBoys. If you haven’t already, you should check out his new album Elefante. Now, this version of the BulletBoys is a must see. But back to the topic at hand.

The singer of this version of Ratt [Josh Alan] reminded me of the punk carnival kid from the movie We’re The Millers. The one [Scotty P.] with the “No Ragrets” tattoo on his neck. The one Jennifer Aniston punches in the nose. This was a real life Mark L Young. Lol. Look it up… Looks just like him! Ha! Ha! All I can say at this point would be that this is the best cover band featuring an original member. Overall, the crowd reaction wasn’t too bad I guess. In my mind, they were not at all deservant of the spot in the line-up they were given. By the way, the guys in Westfield Massacre who are friends of Bobby Blotzer‘s were in the crowd and are pretty decent dudes to talk to. So shout out to them for being cool. Good luck fellas! 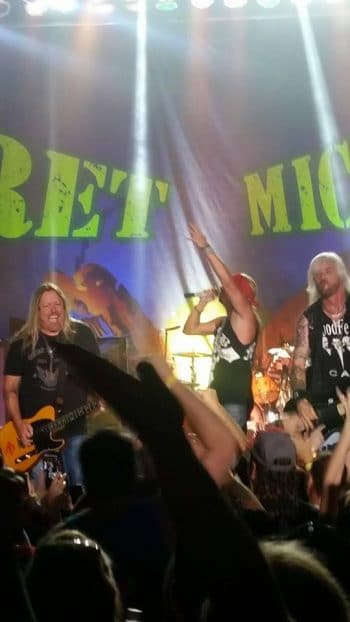 What can you say about these guys? I found it strange that there were so many pictures of Bret on stage but that is my only negative here. From the time the band hit the stage till the time they auctioned off items for Wounded Warriors, this band pushed the limits of sound, stage performance, heart and down right — well, fun… This is a band that kicked ass and took names. There was so much energy in every song from the band, which now includes Cinderella bassist Eric Brittingham. I was impressed to say the least. Such great talent and what a performance! Bret‘s harmonica playing and voice are spot on some 30 years later. From “Your Mama Don’t Dance” to “Something To Believe In,” you felt connected to the ’80s.

Back to the days when the band members would have girls come over to their house and bring make-up, when the band had to hire security do to all the fights they were in, to when wearing buttons of Salty Dog on your jean jacket was cool. But wait a minute, this wasn’t Poison. It was the Bret Michaels Band. I have to tell you when I heard the song “Look What The Cat Dragged In” that night, I was wisked back to 1986 and the Woolworth store. I saw this huge packaged CD with these really hot chicks on the cover. So my buddies and I stole the CD — sorry Bret, I owe you some money — thinking this was some hot chick band that probably sucked but looked good on the cover. We put the CD in and here is some dude’s voice and we were all like “What the fuck?” So we took a closer look at the  CD cover and — hahaha — immmm, yeah, they were dudes. Lol… But I’m glad I picked up that record — literally hahaha!

Man, what an overall great night! Eric Brittingham (and Jeff Labar) is so overlooked and underrated, it isn’t funny. These guys were Cinderella. I mean they put on a show and Eric brought that to the stage tonight. His signature bass swing around the neck he and Labar perfected in Cinderella had the crowd locked in and dialed up to 10. The energy the band had was unbelievable and non-stop. I have seen many bands. I won’t name names but a lot of them are 2000-2016 bands and they can’t hold a candle to the Bret Michaels Band. You were rock n’ rolled at the Goodyear Hall for sure. When Bret slowed it down with “Every Rose Has Its Thorn,” I was kind of like “Ugh, here we go, this is one of the most over played song on the radio from Poison. I would rather hear ‘Ride the Wind’ or ‘7 days over you.’ Anything but ‘Every Rose’…” However, it has to be the most recognizable song from the 30 plus million selling band ever, and Bret sang it with emotion and vigor. Very well done guys! You spanked the ass of every band out there touring today.

The band wrapped up with a little KISS cover inviting Robert Mason back out on the stage to help sing “Rock N Roll All Nite” and the crowd was on its feet the whole time. I would also like to mention that every dollar Bret raised from his meet and greet and auctioned off party hats and guitars goes to the Wounded Warriors project. So please take part in this great event. By the way, Rockin Johnny is a young man who has I believe down syndrome and Bret brought him up on stage during the last song and introduced him to the crowd, which of course made his day. At the end, Rockin Johnny jumped in Bret‘s arms because he was so appreciative. Overall, for the price of the ticket, it was worth it. Goodyear Hall is a great venue by the way! If this show comes to your town, spend the money and go have a great time. Cheers.

Cameron Pierson with Bret Michaels and the BMB at Goodyear Hall, Akron, OH