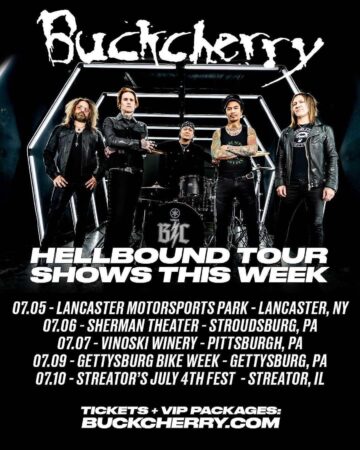 It’s hard to believe that Gettysburg Bike Week is celebrating its 20th anniversary this year. Like everyone else on the planet, promoters were forced to cancel 2020’s installment but it returned in 2021 with an absolute vengeance! They had not one, but two phenomenal headliners this year with Buckcherry performing on Friday, July 9th and KIX performing on Saturday, July 10th. That doesn’t even include the extensive list of other bands and entertainers that performed such as Honeypump, Jasmine Cain and many more. If you’ve never been to Bike Week, I highly recommend it. Not only are the live-music offerings generally top notch, but they also have dirt-bike racing, axe throwing, and a seemingly endless congregation of vendors lined up to help you trick your bike out.

But surely you aren’t here to read about motorcycles rallies, are you? Which brings us to the music. Having just released their excellent new Hellbound record, Buckcherry are out on the road in support of the album, which (if my math is correct) is about their 12th release. I still vividly remember when they debuted in 1999 with their single “Lit Up” and they were such a breath of fresh air. Finally, a TRUE rock n’ roll band with hooks, loud guitars and songs 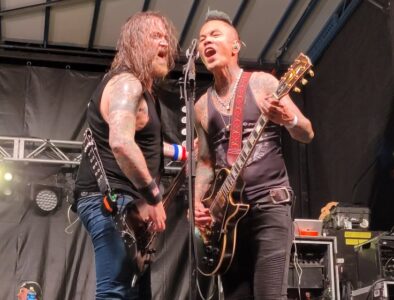 about partying. They were a spectacle. They reeked of debauchery. They were definitely not the norm for what was happening in the ’90s. Since then, they’ve continued to drop one great record after another in what is undoubtedly a challenging climate for rock bands. They do things the grassroots way in that they write quality songs, they still release physical media, and they tour until the wheels fall off of the bus to get the word out on whatever their latest release is. With a work ethic like that, I say that Buckcherry deserve to be where they are today.

The band has just celebrated milestone sales in that they’ve moved eight million units of their comeback effort 15. Numerous tracks from the album made their way into the show at various points of their 14 song set, which started off with towering frontman Joshua Todd taking the stage in a heavy wool military coat and bandana while the band tore through “So Far” from that very album. It’s been a while since I’ve listened to 15 and I had forgotten what a cool song “So Far” really is. Hearing it live for the first time had me ramped up to hear what was next. The band members were positively on fire from the moment that they hit the stage. New single “So Hott” kept hearts racing and I like the ’70s / classic rock revival they have going on in the song from their new album. 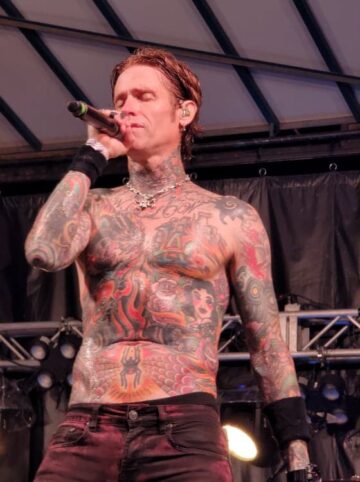 Buckcherry welcomed new drummer Francis Ruiz and guitarist Billy Rowe into the band for this cycle and both are seamless transitions. I’m a huge fan of Rowe’s original band Jetboy, and when I learned that they had hired him as their rhythm guitarist, I was stoked since we haven’t heard too much out of that camp since their 2019 release Born To Fly. Alas, Rowe kept more of a low-profile at stage right holding down the rhythms while mohawked lead guitarist Stevie Danacay soulfully nailed down most of the solos. To be fair, neither Rowe or Dacanay were on wireless systems, which probably hindered their ability to move about the stage with as much freedom as bassist Kelly LeMieux who, in contrast, never stopped moving. He was headbanging and belting out backing vocals as his fingers flew up and down the fretboard of his bass like a madman. He was giving his all and rocking out so hard that his long hair was drenched in no time. By the end of their performace, the bassist looked like had been caught in a thunderstorm. What a madman and performer!

Perhaps my favorite moment of their show was during their performance of “Somebody Fucked With Me”, from their 2014 EP Fuck. It’s an ode to the disenfranchised and has a slamming groove underneath anthemic verses that render us, the listeners, unable to not sing along. Just an absolute riot to hear live and I loved every moment of it. Frontman Josh Todd paused in between most of their songs to chat with the audience and express his gratitude to be back and also his love of the area. He then shared that he penned their next song “Too Drunk” at a very young age although you’d never know it based on the professional song structure and infectious chorus on what is a standout from Black Butterfly. That candor continued as Todd open-heartedly confessed that their next number was based on his own struggle with 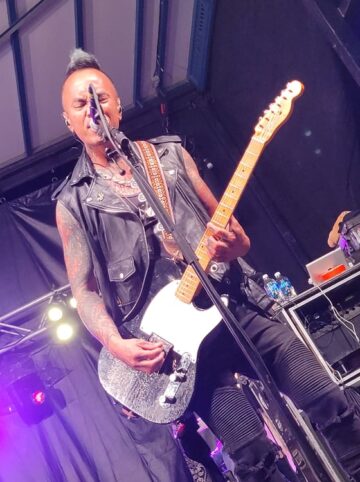 addiction. I commend musicians for publicly sharing their struggles through their music because if it helps one person out there to get through whatever demons they might be facing, it’s worth it. “Gluttony” is that very admission that one, two or even three hits are never enough when one is in the throes of addiction. It’s the shining star of their Confessions album.

With it being one of their most anticipated songs, I really wasn’t expecting Buckcherry to play “Lit Up” so early in their show. I thought they would almost certainly play it near the encore, but I was wrong. We’ll chalk that up to even distribution, with “Crazy Bitch” balancing out the scales and driving things home right near the end. They guys took the long way around to their finale, peppering in a few verses of “Jungle Boogie” and “Proud Mary” before leaving the stage at the end. At least we thought that was the end. Nada. After disappearing for a few seconds, the guys re-emerged to bust out an encore of “Dead” which was a bold step and rather left field hit. But hey, it worked! All Night Long is kind of a sleeper album for me in that it’s one that I don’t normally get to that often in their collection. Maybe I’ll have to revisit that one if “Dead” is any indication on the caliber of that recording.

There was a sea of people on hand to see Buckcherry, and their show went by in a blink. They played a full 14 songs, which were short and right to the point. I wasn’t quite ready for the show to be over and I wouldn’t have minded hearing a few more cuts off of their new album, such as “54321”. If you haven’t heard Hellbound, I recommend checking it out. From start to finish, it’s full of great songs that are some of the band’s finest in years. It even has a cool album cover. What 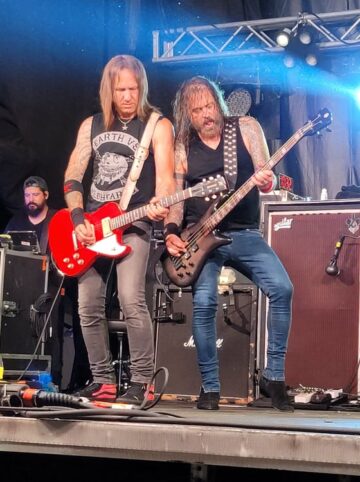 more can one ask for? The band is currently touring through the end of the year in support of the album and if Buckcherry come to your neck of the woods, go Hellbound.