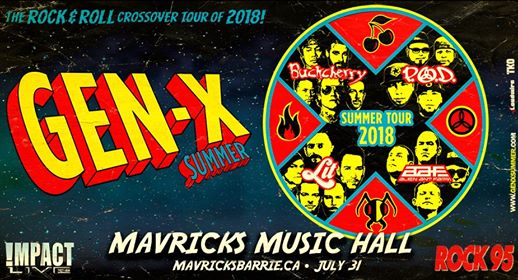 With two weeks away from La Familia (wife and kids), I was looking into which rock concerts that I could possibly attend during that timespan. One enticing concert was seeing Buckcherry at Mavricks Music Hall in Barrie, Ontario. Less enticing were the bands that Buckcherry were billed with — Alien Ant Farm, Lit and P.O.D. — which were three bands that I admittedly would not recognize if you played any songs from their respective repertoires. I am not sure why this seems to be happening more and more but “weird” bills mixing various genres together seem to almost be the norm these days. Def Leppard and Journey co-headlining, Metallica with Avenged Sevenfold and Volbeat, Styx with Joan Jett and Tesla — all of these bills seem a little odd to me in that there is at least one band that I seemingly know every song and others that I know a handful of songs at best. This time around, I knew none of the songs from Alien Ant Farm, Lit and P.O.D. so my focus was clearly only on Buckcherry for the bill dubbed the Gen-X Summer Tour. It didn’t really matter in any case as I knew that I could only make it to the venue by 10 pm at the earliest and once I found out that Buckcherry were closing the evening, I was game to go.

As I checked for start times heading into the evening, I was surprised to see that although the four aforementioned bands were dubbed co-headliners, some (Alien Ant Farm and Lit) were getting much shorter set times (30 minutes) with P.O.D. scheduled to have 45 minutes and Buckcherry, 75 minutes. All I could think of was that worked for me as long as I had enough time to get to the venue to witness Buckcherry‘s set. I will say that although the bands seemed to be an odd fit on the bill for me, it was also dubbed as “The Rock & Roll Crossover Tour of 2018” and there was a sizeable crowd on hand attending the Gen-X Summer Tour, and way more than the amount of people that came to see Sebastian Bach play at the same venue the preceding month. 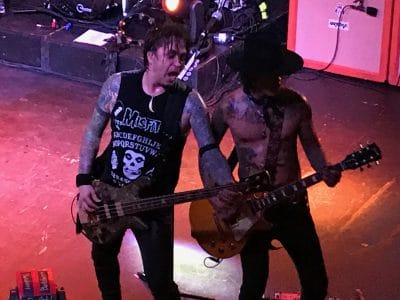 I arrived at about 10:15 pm and found my buddy Rich “The Meister” Dillon in the back taking in the end of P.O.D.‘s set. He didn’t look particularly impressed although he advised knowing or recognizing the band’s last song. I had no clue what song P.O.D. were playing but there was a big crowd witnessing the band’s set. As we were waiting for Buckcherry to come on, we were greeted by Diemonds‘ frontwoman Priya Panda and guitarist Daniel Dekay. I love that those two remain huge music fans and get excited to attend concerts even though they of course are part of a longstanding band of their own. After all, I ran into Priya at the Bach concert at the same venue the preceding month even though each of us live in Toronto (one hour away). The next day, I did my interview with Priya where she opened up publicly about some of Diemonds‘ struggles and her own personal ones as well leading up 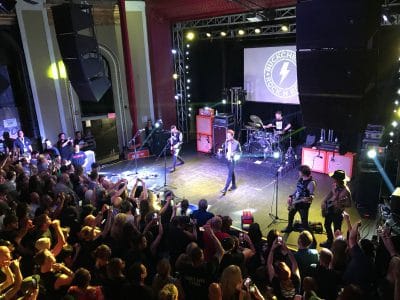 to the release of Diemonds‘ fourth album (which will be released digitally on August 10th).

Before long, Buckcherry were up and The Meister and I had a great vantage point to see them from the VIP section, which  included the staircases to the side that led to a large upstairs area in the venue with the very high ceilings. Since seeing Buckcherry play live in late 2015, I really hadn’t kept track of the group aside from a few Sleaze Roxx articles such as long-time guitarist Keith Nelson and drummer Xavier Muriel suddenly leaving the band in mid-2017. Not being the biggest Buckcherry fan, it really didn’t matter to me that Nelson and Muriel were out of the band. The two most important and identifiable band members were still there — singer Josh Todd and “Philippino” (a word coming out of Todd‘s mouth) 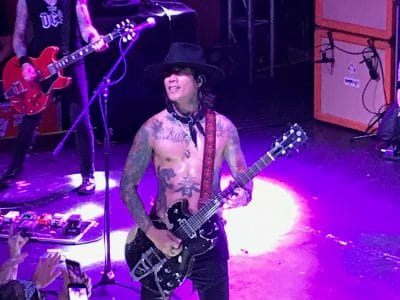 guitarist Stevie D. — and that’s all that really mattered. The duo were balls of energy with Todd only behind Kix frontman Steve Whiteman in terms of the most active and moving singer out there on a live stage. Todd simply doesn’t stop and must get quite the workout from playing live. The rest of the cast — presumably guitarist Kevin Roentgen, drummer Sean Winchester and bassist Kelly LeMieux — did a fine job but the spotlight was clearly on or taken by Stevie D. and Josh Todd.

There were only a handful of Buckcherry songs that I recognized — “Lit,” “Sorry” and “Crazy Bitch” — along with their surprise cover of The Doors‘ “Roadhouse Blues.” Although I wasn’t familiar with many of their songs, Buckcherry put on an entertaining performance and it’s hard not to get into the songs when the band members themselves seem really into them.