BUCKCHERRY PUT ON AN ENERGETIC AND CHARISMATIC SHOW 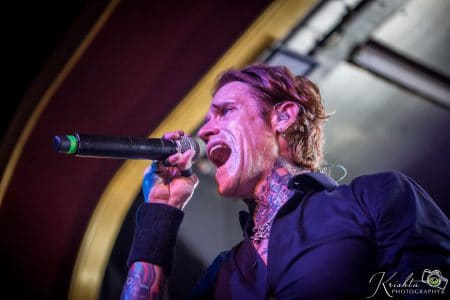 Buckcherry frontman Josh Todd is the sole remaining member of the classic line-up since guitarist, co-founder, co-songwriter and producer, Keith Nelson, departed a couple years ago. Todd alongside with guitarist Stevie D. who came on board for the second coming of Buckcherry on 15, where he remains to this day. Stevie has become Josh Todd’s right hand man having joined Todd on Spraygun War and Josh Todd And The Conflict. 2019 marks the 20th anniversary of the Buckcherry album, “I don’t sit back and reflect much on the catalog, until your manager comes up to you and says, “Hey it’s been 20 years!” It’s then that I stand back and say to myself, “Whoa, it’s 20 years!” So, I have reflected on that album and have a lot of fond memories of the album,” the singer told Sleaze Roxx back in May. 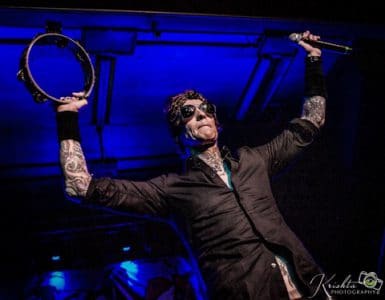 Todd might be slightly dismissive of the classic album at the moment, because he has a new album to promote, the new record is Warpaint, which was represented by set opener (Nine Inch Nails cover) “Head Like A Hole,” “Bent,” “Radio Song,” “Right Now,” and “The Alarm.” The tunes off Warpaint that received the best response were “Head Like A Hole” perhaps due to its familiarity and being a hit song before and “Radio Song” which Todd mentioned from the stage that “it’s the band’s “Purple Rain”.” While that might have been a reach, it’s an incredibly good song. As you can imagine, it’s getting increasingly difficult for Buckcherry to put together a setlist. “It’s super hard, I was speaking to the band, about doing a set of all the videos. Stevie D says, “You know there’s 31 videos?” I’m like, “Fuck! We can’t do that [laughs]!” There’s something like 100 Buckcherry songs. The last time around, we did like three songs off the record. We also sprinkle in there a lot of the usual suspects — “Crazy Bitch,” “Sorry,” “Lit Up,” stuff like that, [and] then there’s songs that we rotate every night,” said Todd in May. 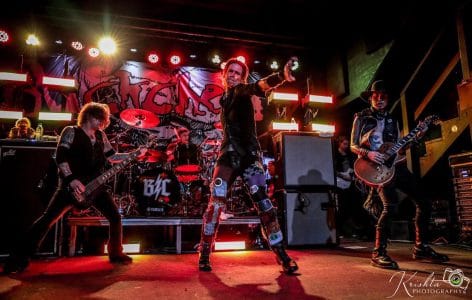 Portland got a healthy helping of new material along with some of the usual suspects — “Everything,” “Sorry,” the overexposed “Crazy Bitch,” “Lit Up,” deeper cuts “It’s A Party” and “Too Drunk…” amongst others. I have to say there were too many covers in the set. We got Nine Inch Nails. They threw a rockin’ completely unnecessary cover of “Footloose” and closed with “Say Fuck It.” I kept thinking, they could have done “Tight Pants” or “Lawless And Lulu” or “Carousel” instead of that! That’s the diehard fan in me I suppose. Buckcherry put on an energetic, charismatic show. It happened to get into the ’90s that day. The club was jam packed, sold-out from what I heard. It was like a sauna, but an incredibly great time. Keith Nelson’s slide guitar was sorely missed on “Lit Up.” The casual fans won’t notice the change in the line-up. As long as they see the thin ginger, covered in tattoos from head to toe, jumping around the stage, belting out “Crazy Bitch”, they’re happy.

Snippets of Buckcherry performing “It’s A Party” live at the Hawthorne Theatre in Portland, Oregon, USA on June 11, 2019:

Snippets of Buckcherry performing “Say Fuck It” live at the Hawthorne Theatre in Portland, Oregon, USA on June 11, 2019: