WHAT HAPPENED TO THE WILD?

Life is short and you never know what can happen. An opportunity to see a great band play can be taken away from you unexpectedly. Certainly, the terrorist attacks in Paris, France and in particular at the Eagles of Death Metal concert at the 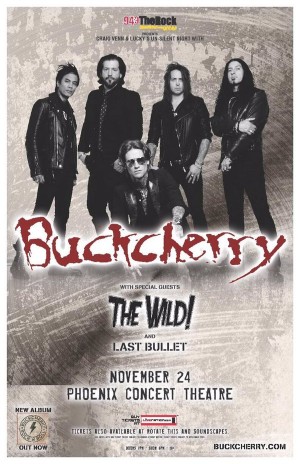 Bataclan was a stark reminder in that regard. As my friends and fellow rock journalists, Eduardo (Sleaze Roxx) and The Meister (Decibel Geek), and I were lining up outside in the suddenly chilly Toronto weather to make our way into the Phoenix Concert Theatre, someone ahead of us mentioned that The Wild! were not playing on this night. What??? How could this be? A quick Facebook check confirmed that this was indeed unfortunately the case. If you read my CD reviews on Sleaze Roxx, you’ll know that I am crazy about The Wild!‘s debut EP GxDxWxB. An inside source confirmed that The Wild!‘s frontman Dylan Villain was suffering from a bad case of laryngitis and let’s face it, if you are having trouble speaking, you’re simply not going to be able to sing. This led to me regretting my decision to skip The Wild!‘s show in Barrie three nights earlier.

You see, I had actually bought my ticket to see The Wild! open for The Lazys and One Bad Son at the Roxy Theatre in Barrie — which is about one hour north from Toronto — a while back but no offence to the latter two bands, I was only really going to see The Wild! play for the first time. I knew that The Wild! were scheduled to open for Buckcherry three nights later in Toronto but I had elected to skip that one having never got into Buckcherry in the past and preferring the much cheaper ticket (under $10 for early birds) to see The Wild! in Barrie. However, as both shows drew near, Last Bullet were added to the bill for the Buckcherry / The Wild! concert in Toronto and I then opted to attend that concert rather than the one three nights earlier featuring The Wild! with The Lazys and One Bad Son.

The whole missed concert opportunity with The Wild! reminded me a lot of what occurred this summer when I was scheduled to go see one of my favorite bands — Sister Sin —  at the Rock Mayhem Festival on July 15, 2015. Sister Sin were going to play a short 35 or so minute set at that event but were playing a headlining gig at a small club in Amherst, New York, USA — which is about two hours away from Toronto — the night before. However, I had already bought tickets to go see Def Leppard play in Toronto for that fateful evening. Given that I would get to see Sister Sin the next day, I elected not to see the Swedish metal band’s headline gig in Amherst and attended the Def Leppard concert instead. The next morning, I found out the horrible news that Sister Sin were having visa issues and would not be playing in Toronto that afternoon. To make matters even worse, Sister Sin have recently, suddenly and unexpectedly called it quits. In short, you never know what can happen and when you have the opportunity to see a great band play, take it while you have the chance! 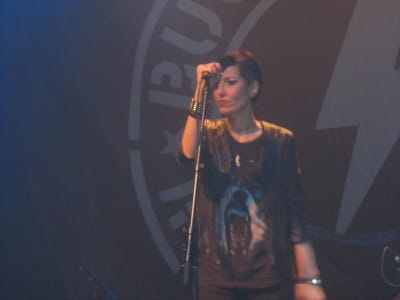 Apparently, there was another band ready to play on short notice to take Last Bullet‘s opening slot. As it turns out, it wasn’t a full band but rather a young female singer, an older gentleman playing the electric guitar and some recorded drum tracks (yikes). I don’t know if the duo had a band name because neither mentioned it during most of the set that The Meister, Eduardo, other fellow Sleaze Roxx writer Mark Hovarth (who arrived shortly after we did) and I were able to catch. The lack of stage presence was rather sad to see as the duo could have played on a tiny little stage since they both stayed stationery in their positions for most of their set on the large Phoenix stage with the singer only venturing a little bit to her right towards the end. The duo’s songs were “alright” with the highlight being their cover of the Killers‘ “Mr. Brightside” which paled in comparison to Marty Casey‘s cover of the song on the TV show Rockstar INXS. Overall, I think it would have been better to give Last Bullet (and perhaps Buckcherry if they were up to it) an even longer set rather than have the singer-guitarist duo with the unknown name fill in at the last minute. 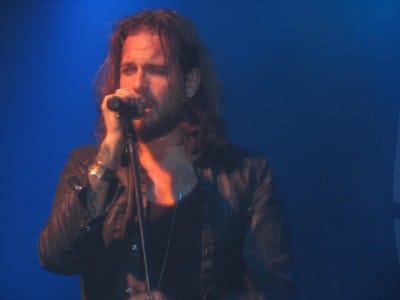 By the time that Last Bullet came onstage, the place was quite packed with people and I had wisely made my way up close to the stage in the 10 or 15 minutes before the Canadian rockers would hit the stage. To say that Last Bullet took advantage of their opportunity is an understatement. Last Bullet grabbed their opportunity by the throat and simply killed it never letting up and putting on a very impressive performance for everyone to see. The group hit the stage with “State Of Confusion” and you could tell right away that the band was on fire. The sound was excellent and there was a real buzz in the air while the group gave it all they had. All of the band members (with the exception of drummer Chris Galaz who was behind his drum kit) were moving around so much it was very difficult to get good photos with my subpar camera (which desperately needs to be replaced). It was apparent that a lot of people in the audience were Last Bullet fans since I could hear many people singing along (me included) with lead singer Bryan Fontez during many of the Last Bullet songs. 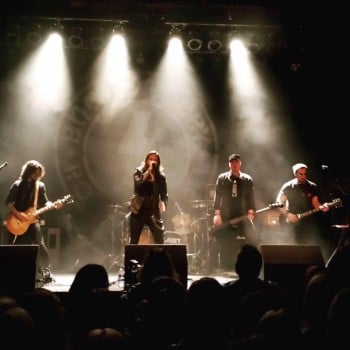 Last Bullet played two more stellar tracks from their second EP Love.Lust.Illusion — “Jet” and “Runnin’ Out Of Time” — before playing a bunch of new songs, all of which I had heard live in the last year and a half or so. My favorite out of the new tracks were their pussy song — the aptly named “Southern Lips” — and “Sin” which the band recently released as a single and also shot a video for. Perhaps given the time constraints, Last Bullet‘s charismatic frontman Bryan Fontez did not address the crowd that much but he did mention the band’s cross-country tour of Canada about a year earlier where the band played an impressive 26 nights out of 30 and usually gave a small introduction to each song played. Fontez once again showed why he is a great frontman as during one point between songs when it was getting a little quiet, he just let out a scream, which the crowd enthusiastically repeated. Fontez then let out four more screams all of which were responded to by the audience and it was almost like seeing Judas Priest‘s Rob Halford with his traditional follow after me screams during the Priest‘s classic “You’ve Got Another Thing Comin.'” Last Bullet closed off their terrific set with a rousing rendition of “Forget The Rest” which was Fontez‘s cue to get the crowd to participate in a fun sing along after him. Although Last Bullet did get to play nine songs, I was wishing that they would have played one or two songs from their first self-titled EP — more specifically “Girl’s Gone Wild” and “Rock ‘Til We Die” — which I know would have been very well received by the audience.

Just like when I saw Last Bullet put on an amazing show earlier this year back on Valentine’s Day and seemingly sold tons of CDs and t-shirts afterwards, the same thing seemed to be happening again with Last Bullet seemingly moving lots of merchandise after Buckcherry‘s set was completed and I was heading out past their merchandise table. But back to the concert itself… 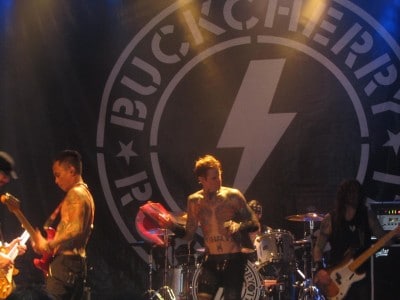 It was now time for Buckcherry to hit the stage and I am embarrassed to say that I have never got into the band in the past, likely because I have always unfairly lumped them in with grunge bands since the group started just as the grunge genre was really taking off. I even wandered away from my excellent vantage point near the stage given my general apathy to see Buckcherry. As it turns out, that ended up being a mistake since it’s always better being one row back than fifteen rows back to catch a concert and Buckcherry were really good! I suspected that I would recognize some of Buckcherry‘s songs as they played and indeed I was correct. Buckcherry hit the stage with “Lit Up” — which I actually knew quite well — and proceeded to put on a great and lively performance. I had been warned by both The Meister and Mark Pistol that the f**k bombs would be flying and all throughout the band’s songs to the point of nauseam but I did not find that to be the case, largely perhaps because I could not really make out the lyrics that Josh Todd was singing a large portion of the time. I was really surprised how catchy that Buckcherry‘s songs were and will look into their discography in the future. Todd reminded me a lot of Guns N’ Roses‘ Axl Rose with his constant dancing or moving from side to side while singing. 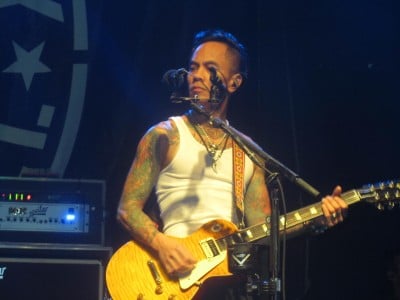 The Buckcherry band members themselves — looks wise — reminded me a lot of Motley Crue‘s Tommy Lee and Nikki Sixx with all of their tattoos all over their bodies. I could feel the ground shaking underneath me multiple times during Buckcherry‘s set (and actually a couple of times during Last Bullet‘s set earlier on) as the audience seemed for the most part very into Buckcherry‘s set. By the time that Buckcherry closed off their set with a rousing rendition of “Crazy Bitch” — which indeed brought out some crazy cougars out of the woodwork and dancing along — I was a converted man and a new Buckcherry fan! The group came back for two entertaining encores — “Say Fuck It” and “Too Drunk” — which the crowd lapped up. Overall, Buckcherry put on a great performance and have certainly made a new fan out of me. It’s funny as all of my preconceived notions of the band turned out to be wrong.