BulletBoys, Gunzo featuring L.A. Guns’ Tracii Guns, Killer Bee, and Tattooed Millionaires were at a Pickle Park in Fridley, Minnesota on Sunday July 26th. Sunday night concerts are always difficult ones to have a full house. When Tattooed Millionaires hit the stage, I would say there was only about 50 people in the venue. I am not familiar with their material, but they do have the nitty gritty ’80s rock to them. They were doing the best to get the crowd involved but to no avail. The crowd was quiet and not really paying any attention to their show.

Next up was Killer Bee. This band has been around since the ’90s and has released three albums. I was only able to catch their first song because I had to leave for my interview with Marq Torien from the BulletBoys. 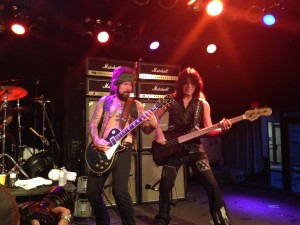 After my interview with Torien, Gunzo hit the stage. Gunzo is a group that Tracii Guns and Rudy Sarzo had recently started just as a jam band. They soon realized they had some chemistry and decided to hit the road. They hired Keith St. John (Montrose, Burning Rain) as the singer and Shane Fitzgibbon as the drummer. This band ripped it up. They were full of energy and you could tell they loved being on stage with each other. Tracii Guns is one of the most underrated guitar players out there in rock. His guitar playing is something everyone should see live, and the same goes for Sarzo‘s bass playing. He was full of smiles and he moves those fingers so fast — it really is something to see live. I was disappointed that they were only able to play seven songs. Their set list included tracks from L.A. Guns, Ozzy Osbourne (solo tracks that Sarzo was on) and Montrose. I was thinking to myself that the BulletBoys better know what they are doing, bringing a band like that to open up for them, because they were that good. St. John is no Ozzy or Phil Lewis, but he did a great job filling those shoes. 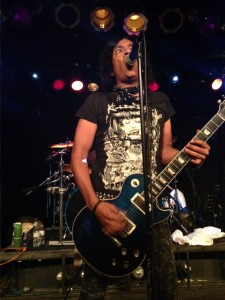 Now it was time for the ‘Boys! BulletBoys consist of Torien (the only original member), Nick Rozz (guitar), Chad MacDonald (bass), and Shawn Duncan (drums). They had no intro to get the show started. They just walked right up on stage and started playing. The show started off with a lesser known track “Born To Breed” from their 10¢ Billionaire album. From the first notes, all cylinders were go! Torien was running all across the stage and making facial expressions between lines or while he was playing the guitar. It was great to see someone having that much fun on stage. I also enjoyed watching Duncan behind the kit. That man was pounding those skins so hard. I saw him break at least two sticks during the show. I eventually found out that he broke a total of three that night and five the previous night. The next track “Hard As A Rock” really got the crowd moving as that song was a staple off the band’s first album. The rest of the night, the set consisted of songs from their new album Elefante, 10¢ Billionaire, and Freakshow. 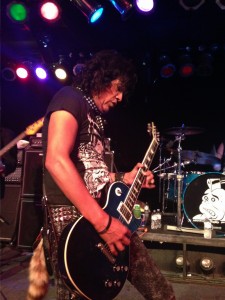 Towards the end of the set, I could tell Torien was less than thrilled with the crowd. I know the turnout was low because it was a Sunday night, and that has to be one of the worst nights for a show. But this crowd was really mellow and Torien had to ask numerous times for the crowd to cheer, but that didn’t stop the band from putting on one hell of a high energy performance. The only negative thing about their show was the amount of time they were on stage. They only played ten songs and I really wish they would have played more new tracks and a track or two off of Za-Za. They ended the show with the hit single “Smooth Up In Ya” and that had the crowd going crazy. If you have never seen the BulletBoys, do yourself a favor and go see them. They are a great live band and will keep you entertained during their whole set.