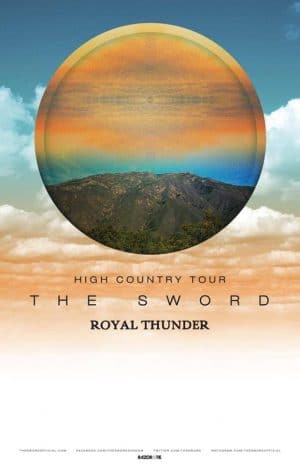 I was running late for this show, so I called the venue from the road. Show time on the ticket was 7:00 pm, and it was almost 7:00. I was told there was a delay, and that the opening band (Traumahawk, a local London band) would not go on until 8:00-8:30. Great! I had time to get there before that band’s start, park the car, buy earplugs (you know you’re old when), buy some merch, and get settled in. When I parked, I took a few pictures of a goose sitting on the roof of a car. Only in Canada, eh! When I got inside, I stopped by the merch booth and spoke to Gabriel. This guy has been around the block in the punk and metal scene, working with The Dropkick Murphy‘s and many other bands, usually as tour manager or merch guy. He told me that he loves working with The Sword. They never fight, they treat people well, and they love what they do. He told me the reason for the delay.

Both The Sword and another band on the bill, Royal Thunder, were pulled over by the police on the way to the venue. The two bands had both left Ottawa earlier in the day. They left at different times but both ran into trouble. Royal Thunder had no rear seatbelts in the van they were in. The police told them they could not continue on in this vehicle. The Sword was pulled over for an overloaded trailer. Then the police searched the vehicle and found something leafy and green that they found a little suspicious. Three hours later, the charge was mysteriously lowered to an “open bottle” fine and the tour could continue. Gabriel let me know the band usually arrives three hours before a show to prepare. He figured the first three songs from the bands would be a warm up, then they would be dialed in.

Traumahawk finally hit the stage and we were blasted with some straight ahead rock and roll. They were good. The band had wanted to have some music for sale at the show but it was not ready in time. Too bad. I would have bought some. One thing I found unique and funny was the bassist let some dude from the audience climb up on stage and take a selfie with him, while the song was being played. The other thing I found cool was the lead singer was a cross between Clark Kent, and Chris Murphy 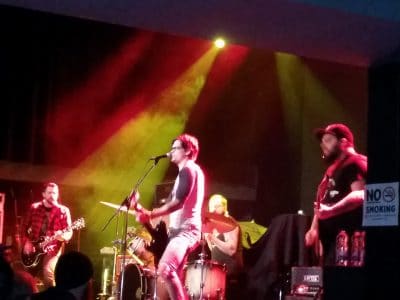 from Sloan. As a dude that wears glasses, I love when musicians wear them. The crowd got into Traumahawk, and so they did a good job of warming the audience up, which is all you can ask for in an opener. I had asked Gabriel if he could recall any good openers he had witnessed on the tour, and he mentioned that Traumahawk were right up there as one of the best, so good on them.

Royal Thunder were on next. The crowd was treated to a soundcheck as the band hit the stage. With all the police issues, the band had no time do this beforehand, so we all got to see what usually goes on before the crowds arrive. I was kind of expecting the crowd to get antsy, especially since very few knew the real story, but everyone took it in stride. We were warmed up by Traumahawk, and everyone seemed in good spirits. Gabriel was pretty accurate in his first three song guess. Once Royal Thunder had it dialed in though, they tore it up pretty good. One thing I found cool was having a female lead singer. I have a soft spot in my heart for female musicians, especially in hard rock and metal bands. Mlny Parsonz is also the bassist, and she does a great job at both. She did something I had never seen before. She sometimes kneels down in front of her bass amps, and runs the bass strings along the cabinet as she is playing. It sounds really cool. She also left the bass on with full distortion cranked when the band briefly left the stage before the mini encore, and we got to hear the feedback while they were gone. That was also 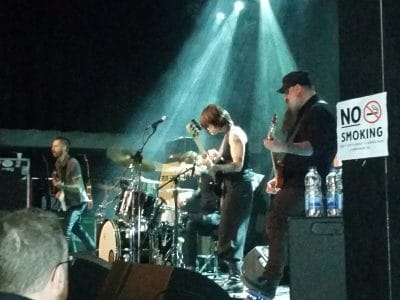 cool. I don’t want to neglect the others in the band, so suffice it to say they were really good. I encourage you to check this band out, and can only assume they will not be openers for long.

The Sword took the stage and again we got to witness the soundcheck. The crowd again took it in stride and the show began. Gabriel had guessed three songs, and maybe for him he noticed them being rusty at the start, but not for me. They sounded awesome right away. Gabriel also told me The Sword never do the same setlist ever. Every show is a different mix. This to me 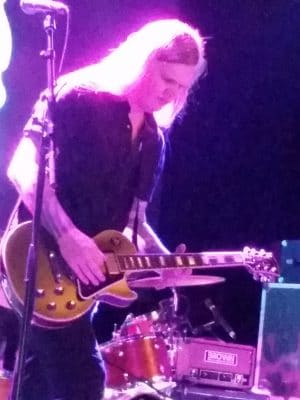 is just awesome. When they started to play, I got visions of all the great dual guitar threat metal bands out there. The Sword doesn’t do the usual one lead and one rhythm guitar player. There is rhythm involved, but it is heavy and loud. This band has evolved from a stoner rock band, but has branched out to include other elements in the music. I got elements of ’80s metal, NWOBHM, ’70s hard rock, psychedelia, stoner rock, and since they are from Austin Texas, a little bit of ZZ Top thrown in for good measure. Basically something for everyone.

Some of their early fans may have wanted them to only play stoner rock, but I for one loved the mixture. I am not in a band, but I feel that not only would I be doing the music for my fans, but I would want to be true to myself. If I felt the stoner rock category was flooded with bands all trying to copy Black Sabbath‘s Master Of Reality album, I might want to branch off and try something new as well. The Sword have done this, and I love it. The Sword blasted through their 15 song setlist, and I enjoyed every damn one of them. I would have loved to see them play 15 more. It was hard enough to get up for work the next day as it was, but I could have watched them all night. 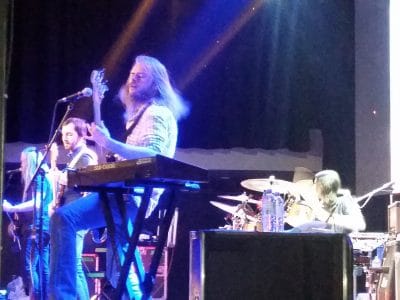 The fans in the front of the stage loved the band so much they decided to do an impromptu slam dance fest. This was the first time I had witnessed a slam dance at a band usually known for stoner rock. Stoner rock fans are usually too mellowed out to even think about slamming. This was a good slam dance too. I witnessed a particularly bloody slam fest at a Metallica concert where I saw a few get carted off for medical care. This looked liked good natured slam dancing, rather than juice monkeys aiming to hurt others. Of note for me, as a Canadian, I was mesmerized by guitarist Kyle Shutt. Not just because he is an amazing axe slinger, but because he is a dead ringer for Jeff Healey. If Healey could be reincarnated with blond hair of Johnny Winter‘s length, and tune his guitar to a louder decibel level, he would be back in the form of Kyle Shutt. 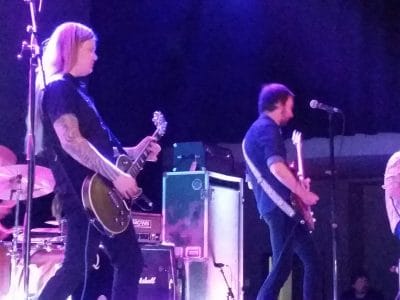 One other thing I made note of was the guitar tech for The Sword. Dave (whose band From Beyond will be opening for The Sword in the second half of the tour) was probably the busiest guy I have ever seen during a concert. John D. Cronise and Shutt probably changed guitars every other song, and there were 15 songs, so tons of guitar changes for Dave, plus he had to make sure they were in tune and ready to slay. He did an awesome job as my face was partially melted off from the molten metal. I can’t imagine doing all of that work behind the scenes, plus performing beforehand. He is going to be one busy dude. Also, I was quite jealous to say the least at the quality of the guitars the two guys own. One particular beauty was a thick body guitar that Cronise brought out. I was right at the front, so hopefully my drool did not damage any guitars. The two guys could easily supply the axes for 10 bands.

I apologize as I do not have any video of the concert I attended, nor could I find any floating around the internet. We all got to see some awesome music. I want to thank all of the band members as they were nice enough to sign all of my stuff, to Gabriel for chatting with me, and giving me info, and to Dave for finding me a rare setlist that he had made up for himself, since the band never uses one.