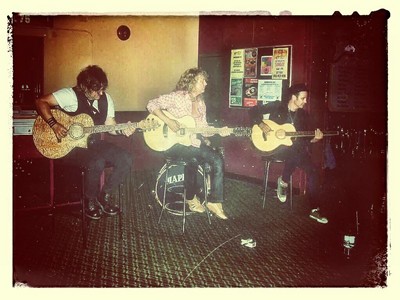 Despite non-stop rain and heavy winds, I decided to brave the elements to catch Coney Hatch at a nearby bar — for a mere $20 I really couldn’t lose. Little did I know while listening to the band’s 1982 self-titled debut during the 45 minute drive to the venue that I was about to partake in one of the oddest rock shows I’ve ever attended.

The rain was coming down in sheets by the time I pulled into The 40’s parking lot, and I was beginning to wonder if I had made a mistake by venturing out on such a crappy evening. Even though I had a short walk to the venue’s entrance, by the time I got inside I was soaking wet. The woman working the door took my money and then asked me to dry off my hand so she could apply the entry stamp to prove I had paid. Because I had shown up early I grabbed myself a drink and decided to try my luck on the slot machines. While playing, and making a little money, an opening covers band took the stage. I didn’t pay much attention to them because I was too busy making some extra cash on the ‘joker poker’ video terminal. But a few songs in an omen of what was to come happened — the power went out! The entire bar went black and all I could think of was the warning sign found on most slot machines — “malfunctions void all pays”. Luckily one of the bar workers came by and told us that they had a hiccup and that once the machines got rebooted our winnings would be paid out. Indeed the power returned quickly, the opening band finished their set of ’80s pop hits, and I got my money (only to blow it all while waiting for the headliners).

Coney Hatch hit the stage with a heavy version of “We Got The Night”, a song that I thought would make a great opener while driving to the show — and the concert was off to a roaring start. Frontman Carl Dixon looked every bit the part with his flowing mane of blonde hair and had obviously overcome his serious car accident of a few years back. Bassist/vocalist Andy Curran played more of a punk rock part with his short hair and bowler hat, drummer Dave Ketchum was the long haired biker behind the kit and newcomer Michael Borkosky took over for Steve Shelski who was unable to play these days due to previous commitments. Borkosky clearly looked like the odd man out with his black vest, tie and jet black hair — a musician who would have looked more at home in a band like Depeche Mode than classic rockers like Coney Hatch. However the guitarist would prove his worth as the strange evening progressed.

“We Got The Night” was followed with the expected, but still overrated in my eyes, “Stand Up” — a Curran sung number that never did impress me. But the band upped the ante once again during “You Ain’t Got Me”… and then things went black! And by black I mean the electricity in the venue went out for a second time and the band was left standing on a stage in front of a bewildered crowd of just over 100 people. It was a little before midnight when one of the bar workers eventually got onto the stage and yelled that a serious storm was taking place outside and that they were going to send Coney Hatch to their rooms until it subsided and the power returned. With a break in the action I decided to venture onto the smoking lounge to see how bad this storm actually was, but other than endless rain it didn’t look too sinister outside. To make matters worse, a quick glance to the north and then the south proved that the only area of the city without electricity was where The 40 was located… it was going to be a long night.

It quickly became obvious that the power wasn’t going to be restored any time soon, but the bar was still selling alcohol that was being served by waitresses carrying pocket flashlights. Not surprising, trying to carry trays of drinks while holding a flashlight makes the job a bit more challenging and resulted in the sound of broken glasses and bottles on occasion. Eventually the members of Coney Hatch surfaced and began milling about with the audience, shaking hands and taking pictures while we all wondered when, or if, the show would resume.

Forty five minutes of sitting in a darkened room (and you know it’s dark when a guy asks to borrow your lighter so he can see while going to the washroom), with only a handful of emergency lights offering any luminosity, members of the audience began leaving the venue. Little did they know they were about to miss out on an excellent show. It was getting close to 1am when members of Coney Hatch began setting up chairs at the entrance of the bar. Apparently the bar manager asked the band if they would play an acoustic set if he could find them some instruments — and the rockers were obviously game.

With a couple of acoustic guitars, Dixon and Borkosky announced that the show would go on! There they were, tuning these donated guitars with a battery operated tuner in front of a couple patio lanterns — or as Dixon called it, ‘Coney Hatch by the campfire’. The duo began to play without any microphones, amps, or anything else one would associate with a hard rock concert while Ketchum was seated behind them with a small bass and snare drum. Borkosky laughed that this was only his third time playing with the band and the first time ever performing them acoustically. Dixon, obviously enjoying the challenge about to face his younger bandmate, in turn smiled and said the newcomer’s fingers would be sore in the morning. However that comment would come back to bite Dixon in the ass as the show went on when he cut his thumb on the borrowed instrument and occasionally had to suck the blood off it. The pair asked the crowd, who had now nestled close to the band in a half circle, what song they wanted to hear and were probably pleasantly surprised when they asked for “Blown Away” — the band’s newest single from last year’s reunion album ‘Four’. Thus began the second half of the Coney Hatch show.

From there an acoustic bass arrived for Curran and Coney Hatch went on to deliver popular staples like “Hey Operator” and “Devils Deck”, often turning the show into a ‘storytellers’ segment where the band would explain the meaning of each song before performing them. Just prior to “Hey Operator” Borkosky asked if he could use the battery powered tuner to fix his guitar, but upon plugging it into his instrument it quit working. He quickly gave it back to Dixon, who had been using it, only to find that it no longer worked for him either. “I guess it ran out of power,” said Dixon, “That seems to be the theme of the night,” laughed Borkosky, before the duo figured their guitar tuning was ‘close enough for rock ‘n’ roll’.

Prior to performing a cover of The Angels‘ “Marseilles” Dixon revealed it was the first song he ever played with Coney Hatch upon first joining the group some thirty years prior. After their rendition on AC/DC‘s “Sin City”, and only fifteen minutes until closing time, the power was finally restored. With the lights in the venue back on Dixon and Curran huddled together and I began to wonder if they were thinking of plugging in again to wrap things up. But Dixon eventually said, “Let’s finish things off like this,” and revealed that the reason for the little conference was so Curran could remind him how to play “Music Of The Night”. Apparently someone in the audience had requested it but it had been years since they had last played the forgotten song from 1983’s ‘Outta Hand’, in which Borkosky quickly chimed in that he had never played it! It was then that I really had to admire the new guitarist, as he played through the song as if he had known it forever — although it was kind of funny to see Dixon whisper the chord changes to him as the tune progressed. Finally the band decided to call it a night with “Down And Dirty”, one of the best tracks from their ‘Four’ album.

The smile on the audiences’ faces really said it all, and when Dixon and Curran embraced in a long hug after the show I realized the evening had been as special for them as it was for everyone else. It was two in the morning before I got back to my truck for the drive home and I started to wonder how many other bands would have performed in such a way? I pictured too many artists willing to take their paycheck and head for the door in such a situation, but Coney Hatch proved to be seasoned professionals. They made the best of what could have been a bad situation, and truly gave the impression that they were enjoying the evening as much as the dedicated fans who sat in the dark for almost two hours. Many people think touring is just a job for bands, and there is probably a lot of truth to that, but on this night Coney Hatch showed that they also have a love of music — job well done!