CRASHDïET AND SHIRAZ LANE LEAVE THEIR MARK ON OSLO 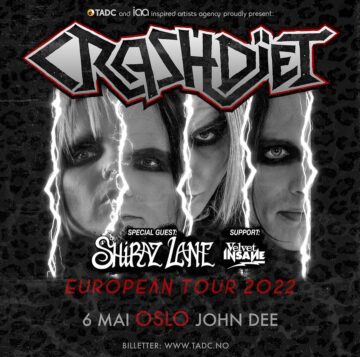 A friend of mine once told me that you can tell that the city is small if you keep on bumping randomly into the people you know there. I’ve never considered Oslo a small city but the truth is that it took me only about half an hour of strolling around in the general vicinity of the John Dee club in the early afternoon before I bumped into singer Gabriel Keyes and guitarist Martin Sweet from Crashdïet. We chatted briefly and then they were on their way. Talk of a great start of the day.

Crashdïet and Shiraz Lane have hit the road this week for the first time since the pandemic overtook the world in 2020. Actual touring is resuming around now in Europe so it will be no understatement if I say that I was very eager to see both bands. So eager in fact that earlier that day I flew from Bergen to Oslo, a one-hour flight, with no other agenda but to experience some rock n’ roll. I hope to be a false prophet but traveling to rock shows may soon be a thing of the past among young people, at least judging by the disbelieving flabbergasted look on the face of a young guy who struck a conversation with me while Crashdïet were setting up their gear on stage after he had learned the sole purpose of my trip to Oslo.

I had to wait a few minutes before the doors of the club opened at 8:00 pm and the fans started trickling in mostly decked in Crashdïet t-shirts. Being one of the first people inside made it easy for me to secure myself a prime vantage point right by the rails in front of the stage where I remained for the rest of the evening.

The first support act was Velvet Insane from Sweden. I’d never heard or seen them before. They were promoting their latest album Rock N Roll Glitter Suit and visually they combine indie rock and 70’s glam, but they also have a trippy thing going on. They turn out to play 70’s glam influenced hard rock. The singer is definitely entertaining. With his David Lee Roth style jumps on stage and funny banter, he managed to get a small crowd to move closer to the stage. The guitarist was on fire and they also stood out by having a saxophonist on stage throughout the set. Overall, they were not exactly my thing, but they sure are an interesting and entertaining band.

Finland’s own Shiraz Lane were next. A woman standing next to me told me she was there just to see them. I could easily relate to that as after two full-length albums and an EP, this still young band is actively trying to find their niche on the scene. The EP 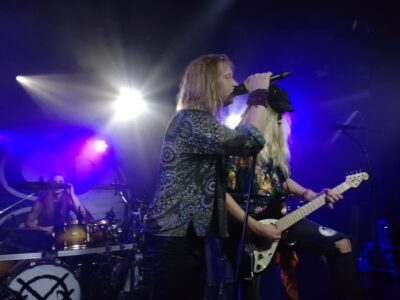 entitled Vibration I from 2020 and the recent singles have revealed funky influences in their hard rocking sound. Their type of hard rock is somewhat more danceable now, while they maintain a great glammy appearance. The five of them, that is singer Hannes Kett, lead guitarist Jani Laine, bassist Joel Alex, rhythm guitarist Miki Kalske, and drummer Ana Willman, burst onto the stage with a brand new track “Disconnect From The Matrix” which may be included on the new album they are preparing for an August release, as they told me later. The track was a high octane rock ‘n’ roll tune. With next track “Wake Up”, which opens their debut album, Shiraz Lane hit a more familiar territory. No one in the club really needed any waking call at that point because the band’s youthful energy and the singer Hannes Kett’s dynamic onstage presence simply make it impossible to stand still from the moment they start playing. At least I couldn’t. Hard rocking “Tidal Wave” swiftly followed.

Quite a few of the band’s songs have slower, more emotional verses and high tempo choruses with really interesting and well constructed melodies. The first highlight of the show was “Broken Into Pieces” – one of the most recent funky singles. The live 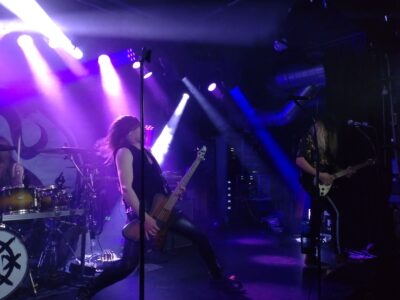 rendition of this song was a magnetic trance that wouldn’t let up. Kett’s vocals were enchanting, the drums on the verses courtesy of Ana Willman were powerful and Jani Laine ripped through the guitar solo. Joel Alex was responsible for most of the backing vocals and Miki Kalske, slightly withdrawn on the stage, made the sound of the band complete. This was followed by two more of the recent singles, “Scream” and “Fake Perfection” and then we were back to Vibration I in the form of “Do You”. The song is jumpy and it invited the audience to shout out the phrase ‘Do you’ numerous times in unison with the backing vocals.

“Reincarnation” from Carnival Days turned out to be another highlight of Shiraz Lane’s set. It turned into a 10-minute jam, initially a ballad only to quickly evolve into a dynamic hodgepodge of hard rhythms, solos, and melodic vocals. It was also during this song that I felt for the first time the fans behind me pushing against the rails. The finale of Shiraz Lane’s show consisted of two tracks — “Harder To Breathe” with its infectious chorus which you can’t help but sing along with the band and the cover tune “To the Moon And Back” which has now become a staple closer of the band’s live shows. With the show’s end, the audience chanted, ‘We want more’ but there was no more as the 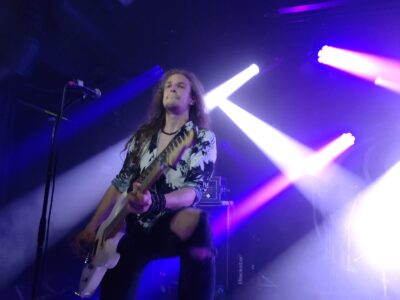 evening’s schedule was tight and it was now the headliner’s turn. 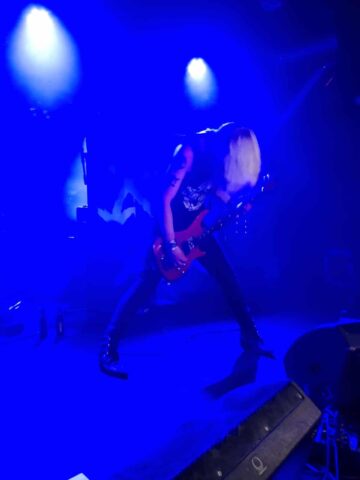 onstage compared with the beast I remember him as on the 2019 Rust tour. Still his vocal delivery was superb on both the older tracks originally sung by the previous singers and the new tracks. It was however bassist Peter London who looked genuinely elated to be back to performing on stage after the pandemic-induced break. He threw the best shapes this side of Pepsi Tate to the delight of the photographers and fans taking pictures, he often dashed from one end of the stage to the other, and he interacted a lot with drummer Lacu. He simply made the impression of having a great time. Martin Sweet asserted himself stage-right and Lacu did a great job of filling Eric Young’s shoes.

The band had just released their seventh album Automaton, a second one with Gabriel Keyes on vocals. Two tracks off that album, second single “Together Whatever” and “Shine On” were served at the very beginning of the show. Both have monster sing-along choruses and I think “Shine On” went down even better than “Together Whatever”. Both tracks are quicks slabs of modern sleaze that don’t let up so only after the second one was over did Gabriel address the crowd for the first time. He alternated between Swedish and English when doing so throughout the show but on the whole, he let the music do the talking. The band played 15 tracks in 70 minutes which goes to show how little time there was left for banter and an occasional Skål (= “Bottoms Up” in Swedish/Norwegian) in-between the songs. 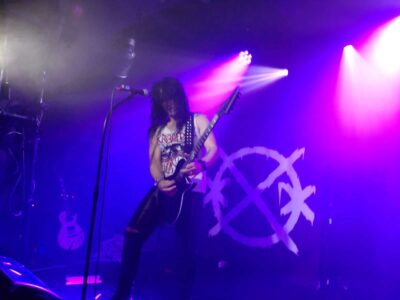 Every era and every Crashdïet album were represented. “Reptile” from Rust was followed by “Cocaine Cowboys” from The Savage Playground – a sequence of very intense tracks and thus very intense moments when it’s easy to get carried away while headbanging. With spot-on vocals and galvanizing energy on stage, Keyes egged us on and we obliged. Without any respite, Crashdïet passed through “In the Raw” from The Unattractive Revolution and went back to the debut album with “Tikket” and “Riot In Everyone”. The tracks from Rest In Sleaze invariably elicited most energized reactions from the crowd and had most people sing along. With “It’s A Miracle”, there came the first slower moment of the show and the singing crowd was enthusiastic. The pace picked up again with another new track “No Man’s Land” at the beginning of which there was a mishap or a misunderstanding as Lacu kicked into a different rhythm than the rest of the band. They started over and continued unabated.

Crashdïet performing “It’s A Miracle” live at John Dee in Oslo, Norway on May 6, 2022 (video from T Larsen‘s YouTube page):

The chorus of the following track “Chemical” was cut out to be performed in a live setting and neither the band nor the crowd missed the opportunity to give it their all. Gabriel Keyes climbed onto the rails in front of the stage and towered there above the club while belting out the lyrics. After that, we were given a respite as the band rolled into another ballad “Beautiful Pain”. This song is not performed regularly live. Phones waved in the air where 30 years ago, there would have been lighters. After “Beautiful Pain”, the band disappeared for a few minutes only to reappear for the encore.  The encore consisted of three familiar crowd pleasers — “Breakin’ The Chainz” and “Queen Obscene/69 Shots” from the debut and “Generation Wild”. It flowed so quickly you could barely notice when one track ended and the next begun. It was intense, sweaty and unstoppable. Unstoppable at least until the show ended, the stage lights went out and the silence started ringing in my ears. 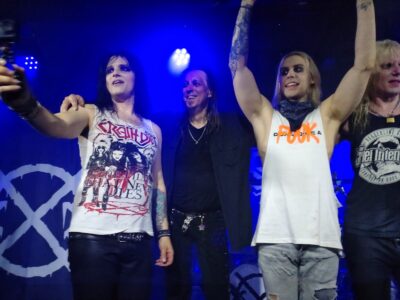 Immediately after the show ended, I made my way to the back of the club where the guys from Shiraz Lane were already kicking back at a table by the merch booth. I always appreciate when a band hangs out with the fans after the show and I often end up liking the band even more this way. From up close, I could see how young and down-to-earth the guys in Shiraz Lane are. I told them how great I thought their show was and they accepted the praise with genuine happiness. The Crashdïet guys showed up too, minus Lacu still busy dismantling the drum set, and I got to chat and take a picture with them like I had after each of the four previous Crashdïet shows I’d been to. The tour continues and all three bands are eager to play to make up for the hopefully long-gone time when tours were postponed, cancelled, and thrown out the window left and right.

When I was manoeuvering my way back to my hotel through the crowd of partygoers that night in the rain Oslo was in a dire need of for a few weeks, I was already growing envious of the people who were yet to see Crashdïet and Shiraz Lane play across Europe on this tour. It’s definitely an experience worth repeating.