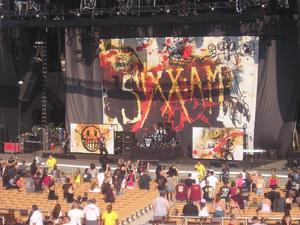 With five bands on the bill we got to CrueFest early. We had had read that the festival had a side stage set up where people could compete playing Rock Band. My daughter was very excited, but unfortunately is under 13, so they wouldn’t let her compete. I couldn’t believe it, but I was so proud of her though, that she would get up on stage. She took it all in stride (I wouldn’t have). Who do they think are buying these games? Unfortunately we missed Trapt because of this.

I guess because there are five bands on this bill the sets have to be broken down quickly so they are not as elaborate as years past. Sixx AM, Papa Roach, and Buckcherry had these massive silk screen banners that were beautiful and Sixx AM had two smaller ones as well with images from the book “Heroin Diaries”, a year in the life of a shattered rock star. The Motley Crue set was an industrial looking metal backdrop and the words Los Angeles (reminiscent of the Hollywood sign in the hills) that lit up, with different ones going on and off. They were propped around the stage and were facing the audience backward. I have seen many of their sets and this was by far was their smallest and least imaginative, but I guess when you take things to such extremes it’s hard to top them.

Unfortunately the same could be said for Tommy Lee‘s drumming. He was always so energetic and over the top, but this time he didn’t even do a solo – and I have seen him do so many crazy, extreme outrageous ones. My favorite was at Madison Square Garden where he played along to all his favorites while his drum kit went up to the ceiling and all around and at one point (I kid you not) spun around while he played. They always left you wondering how he would top it, but I guess he no longer is trying. He did do his usual titty cam which apparently the crowd never tires of.

Sixx AM was unbelievable. Probably the best band that night. James Michael has such an amazing voice and the sound was so crisp and the drummer they hired was over the top (as it should be). Nikki Sixx was very unassuming in a black suit (could that man look any better, wow) playing his monster bass. Though it was early (they went on second) and still light out the crowd was on its feet. They definitely have that arena sized sound. I had read that they walk around in the crowd, so we were on the look out and sure enough we got to meet James Michael and DJ Ashba briefly as they were swarmed.

Papa Roach was next. I wonder if they alternate with Buckcherry because they were also fantastic. I was not familiar with them but loved what I heard. I didn’t even realize that they do the theme song from RAW, called “I Just Wanna Be Loved” which is the kind of song that goes 100mph and leaves you breathless for a few minutes after. Two amazing performances.

Buckcherry, who is also new to me, was very exciting. Josh Todd is very energetic, as were the others. Their songs are filled with sex, booze, sex and rock and roll – kind of an orgasm on stage if you will.

And then my beloved Motley Crue (one of my top bands of all time) took the stage. They looked great, strong and healthy and at this age I know it is getting challenging (lol). I have to say that Mick Mars is amazing. How a man afflicted with Ankylosing Spondylitis, which makes moving difficult, can tear up the guitar they way he does is unbelievable. He just seems to get better every time I see them and I believe he is now at the top of his game.

Dressed like the Rock Stars they are the band did many old favorites, which is what the crowd wanted (I remember one tour they played us their entire new album, Generation Swine (1997), and it was too much). Another thing that has changed, other than the scaled down sets and over-the-top drumming, is Vince Neil‘s voice. It is not what it used to be and he spends a lot of time letting the audience sing (which we are happy to do). But again it was once so powerful that my daughter, who was seeing Motley Crue live for the first time, was disappointed. I have to say in all honesty though that I wasn’t. They rocked my ass off for an hour and a half with all the great music I have loved for so long and with some amazing new material as well all the while flashing disturbing scenes on the two huge monitors.

When it was over I was sweaty, exhausted and very satisfied. I was surprised they only did one encore, but Jones Beach has strict rules about end times for shows so I assume that was why.

So CrueFest has something for everyone. From seasoned old favorites to hot new acts and even a band that was only supposed to be a studio band, but by popular demand brought it out on the road, and boy did they bring it. You can even live out your fantasies on the side stage (remember to say you are 13) playing Rock Band. If you don’t have your tickets yet, go get them!!!! 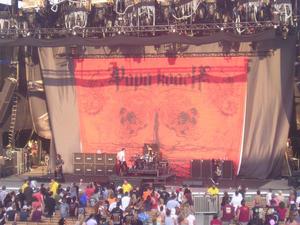 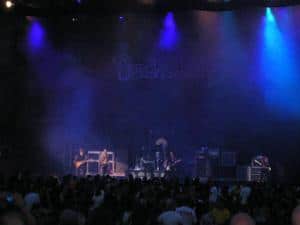 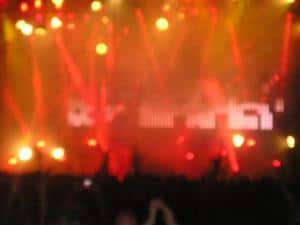 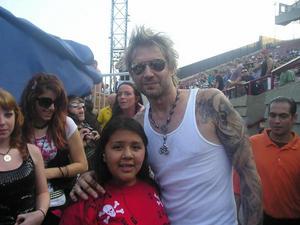