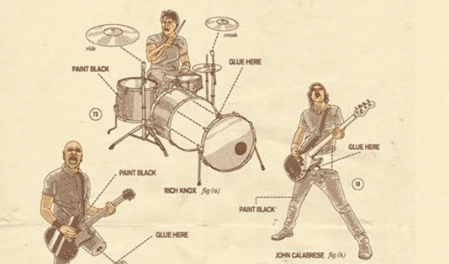 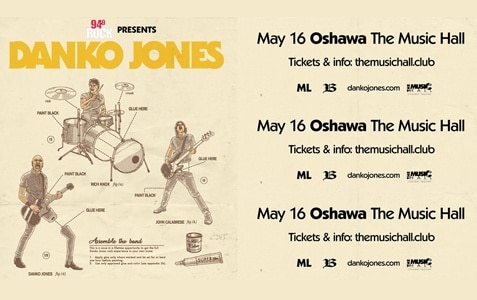 I have to admit, Danko Jones was not an artist I had really ever been that in tune with. Not that I hadn’t heard the odd song on the radio, but I just hadn’t been fully exposed to all he had to offer. It was a few weeks prior to this show that I became aware of the fact that Danko Jones had a new album and he would be playing the Oshawa Music Hall in the coming weeks.

The day of the show, I salivated in anticipation for the upcoming rock show of the evening. What really struck me was the fact that the doors opened at 7:00 pm, with the first band [Excuses Excuses] taking the stage at 7:30 pm. That seemed exciting to me simply for the fact that I am old and I would be safely tucked in my race car bed by 12:15 am at the latest. I think most of our audience can relate to this. Not the race car bed, but the fact of this show being on a Thursday night and having to work in the morning. It seems like so long ago that I would get in at 3:00 am to be at work for 7:00 am. In those days, I was young, wild and crazy, so minimal sleep for just one day was not a huge thing.

My wife and I called Lyft about 10 minutes before 7:00 pm. Literally, we are a five minute drive from the venue. Yes, that’s right. We live close to the heart of the ‘Shawa as it also known. Just for the record, it’s really not that dirty anymore. Take a drive to the north end. It’s now known as ‘Poshawa.’ We arrived and stood outside briefly as my wife fogged a dart. We ran into some familiar faces and began conversing. We were both getting thirsty so we finally ventured inside.

As the first band took the stage, I quickly became interested from just a visual standpoint. The band looked very pro. It was a three piece and all the band members looked as if they were veterans of the rock scene. They all had flowing long hair and they seemed to be in their early 20’s. I came to find out later that the band was based in Oshawa, Ontario and Oakwood, Ontario. Now for those that don’t know, Oakwood is a hotbed for musicians. I know of a few on the circuit around Oshawa that have come out of that small rural community ten minutes west of Lindsay, Ontario, Canada.

As the band begun, I was quickly entranced by the music. The lead singer/guitarist reminded me of a young Kurt Cobain. It was his look, demeanor and all around stage presence that drew me in. The drummer and bass player seemed to be locked in tightly and the songs had a hard rock pop element to them. I was actually mesmerized by the sheer raw talent of Excuses Excuses. I think if given the right marketing, this band could truly become something special in Canadian rock. The songs are very well written and arranged. The musicianship exuded also makes the band very believable. As a band, they play off of each other and allow each member to showcase their talents. In terms of music today, that is something very special as most bands have forgotten about the musical expression involved. Sure the songs are important, but it is also important to give the listener something that takes your eyes away from just the singer.

Anyone remember a band called Rush? Was Geddy Lee always the focal point? Now take that comment with a grain of salt because Excuses Excuses are not Rush, but in terms of identifiable musicians within the band, that is an obvious point. In closing out, if you happen to come across Excuses Excuses playing at a local club near you, they are worth checking out. Possibly the labels also need to take notice as this is something that could really give real rock music the kick in the ass it so needs.

I wasn’t sure what to expect when Double Experience took the stage. Here before me was yet another three piece band. Is this going to be the trend of the evening? As the first chord was hit, I was immediately interested. The band was tight and played with intensity. I could say I was totally focused on one element of the band, but that would be a lie. It was apparent that each member brought something important to the table. The bass player was also the singer. He was animated and had great stage presence. The guitarist was very impressive. My wife at one point turned to me and said something along the lines of “He owns his instrument. He looks very comfortable up there!” I have to agree with that statement. I thought his sound and playing was very stylistically metal, which was a good thing.

As for the last piece of the puzzle, the drummer — he was amazing. Honestly, I was mesmerized by his actions behind the drum kit. He was jumping his stick off his snare drum into his hand. He was playing with the aggression of Tommy Lee, the showmanship of Vince Neil‘s drummer Zoltan Chaney and from a distance, a look reminiscent to that of Poison drummer Rikki Rockett. A good combination if I do say so myself. When the band broke into Blue Oyster Cult’s classic “Godzilla”, I was sold. That takes a lot of balls to cover such an iconic and interesting piece of music. Within the mid-section of the song, the band got the crowd into it and they all seemed to love what was being offered. Overall, another fine new Canadian band with great potential playing before me. In speaking with the band after their performance, I came to find out that they had traveled from Ottawa on this evening and would be heading back home after the show! Well done and enjoyable. I will also make mention that Double Experience did a new song from their forthcoming album called “New Me” which was very, very good.

What can I say about Danko Jones? As I was preparing myself for this review, I had a hard time describing my thoughts at first. I needed to dig deep and really find the words to describe my actual feelings. Sometimes, things just flow out and other times, you’re at a loss for words. Of course, before the show, I bought the band’s latest album A Rock Supreme on vintage blue vinyl. That in itself is worth the purchase no matter how good or bad that music really comes across. I had read the very review of the album here on Sleaze Roxx and felt in reading that review, it was worthy of a purchase on my behalf. I will say, after actually listening to it, it is a very good album, so that was worth the $20.00 I paid.

As for the performance, being that I wasn’t exactly very knowledgeable when it comes to the huge Danko Jones catalog, I really enjoyed the show. I will say that it was loud and in your face. Jones and the other two members of the band [another three piece – coincidence? I think not!] were tight and just as entertaining as the two openers. Jones truly is a great showman. He captures the audience and keeps them within the show. He talks a lot and I mean a lot. Sometimes you’re thinking, “Okay dude! Just get on with it and play another song!” Those were my thoughts, but in looking at the reaction from the audience, they were engaged and really didn’t mind what Jones was going on about. So, my thoughts on that subject don’t really hold much context. It’s about the audience, not the critic.

I will say his audience was younger and I think that hurt somewhat. I hate to say it, but the kids don’t really rock out like we did back in my day. You know those days right? “When I was a kid, I walked five miles to school, uphill, both ways — but we were grateful!” In all honesty, this isn’t my crowd. I felt somewhat like a dinosaur. I was like a T-Rex or a Raptor ready to ravage and go in for the kill. Of course, that kill is a metaphor for rocking out! Don’t read too much into that! There were those in the audience that were my age, but most were along the lines of late 20 something’s. I thought back to the week previous and my experience at the M3 Rock Festival in Columbia, Maryland, USA. There I felt more at home. At this, I couldn’t walk up to someone and start talking ’80s hair bands. Most would look at me like I was a three-headed monster or the dinosaur I mentioned previously? Is this the fault of Jones? Hell no! He comes from a different era and his fan-base demographic is different from that of say Tora Tora or Danger Danger. How many bands use the word twice in their name? Duran Duran too — oh gross!

Overall, I had a good time. The beer was cold. The weather was decent outside. I didn’t have to drive. For a Thursday night out, this was worth the price of admission!