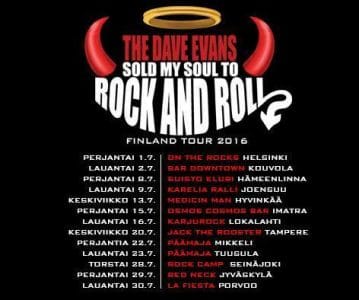 Dave Evans, the original singer of AC/DC, arrived to Hyvinkää on his “Sold My Soul To Rock’N’Roll” tour crossing over Finland this summer. His backing group were the Finnish Badasses, consisting of talented local musicians. The venue tonight was Medicine Man, which was arguably one of the smallest places to play during this tour. The stage, albeit not big, had enough room for five members. For the audience however, the space was rapidly running out and as warm-up band Black. 44 started their set, those having found a good spot didn’t dare to step away for the rest of the evening.

To start off the evening, Black .44 from Helsinki offered hard rock and stoner atmosphere for 40 minutes. The band’s No Blanks album visited 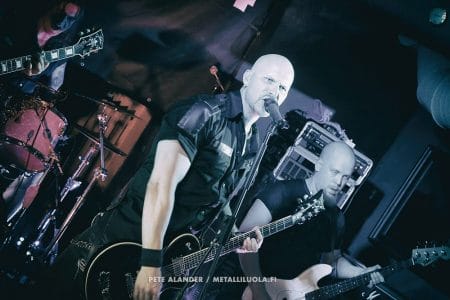 Finland’s official charts last year and got a favorable review from Metalliluola as well. The songs translated well to the live setting and the packed Medicine Man venue most likely got the band some new fans. Vocalist Jason got the front row moving and Mikko — tonight playing with borrowed drums — kept the rhythm nicely together. Although Black .44 still lacks a proper hit song, the professionalism of the players and tightness of arrangements won the crowd over and the stage was set for the headliners.

Dave Evans and his troopers kicked into high gear at 10:00 pm sharp with ”We Don’t Dance To Your Song” and strong energy. Right from the start, we noticed pleasant sounds, which were not ruined by too much volume and yet there was plenty of clarity. All instruments were also in balance and came out heavy enough. 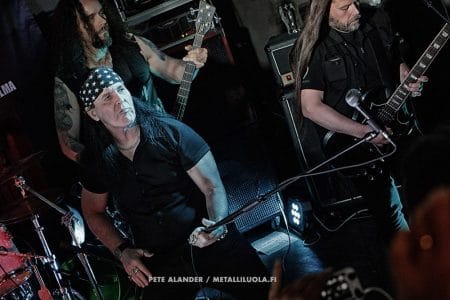 The packed crowd kept dancing and singing along as much as they could from their heated spots. The atmosphere was tight and Hyvinkää responded nicely to Evans’ urging. Half of the set consisted of the man’s own solo material and half were AC/DC classics. Evans took over the small stage with attitude and power, and considering his age, his voice was pretty damn good too. The backing group Finnish Badasses had honed their craft with several shows and played excellent. Evans noted that Hyvinkää was their home town and several friends were witnessing the show. This was heard between songs as people kept cheering various band members on.

We weren’t particularly familiar with Evans’ solo material beforehand, but especially “Put Up Or Shut Up” (dedicated to all backstabbers) and the faster “Sold My Soul To Rock ’N’ Roll” stood out. The solo tunes didn’t have the same quality as Evans’ old band’s cuts, but it is great he is not simply riding on his past glories and brings his own stuff into play as well.

The AC/DC material, as we expected, naturally got the best reception. Evans told how AC/DC guitarist Malcolm Young 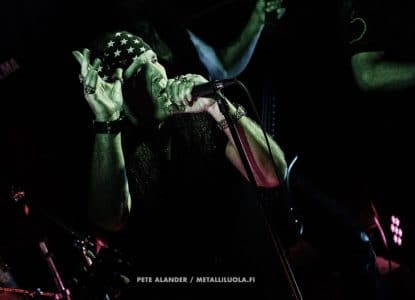 wrote “Rock ’N’ Roll Singer” as a homage to him, who left home at the age of 16. Evans‘ father wanted his son to become a banker but this was not to be. Before departing the band, Evans recorded a single “Can I Sit Next To You Girl” and this was rightfully performed. After an one hour set, Evans announced some Bon Scott era AC/DC tunes because “Bon used to sing all my stuff when he joined.” The audience lapped up the hits “T.N.T.,” “Highway To Hell,” “Let There Be Rock” and extra number “Whole Lotta Rosie.” Instead of these popular tracks, I personally would have hoped for “High Voltage,” “Little Lover” and other rare stuff from AC/DC’s early days, but the band did a great job delivering the hits and the crowd was really into it until the end.

The group and Evans stayed for a long time after the show chatting with fans, signing autographs and receiving accolades for the performance. Although the lack of space did get to us by this point, it must be said these kind of club gigs are still the heart and soul of rock ’n’ roll. It is great old masters still keep on going, and we hope performers like these do come out of the new generation too. Thank you Dave Evans, Finnish Badasses and Black .44! 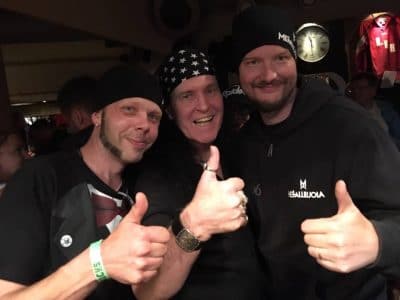