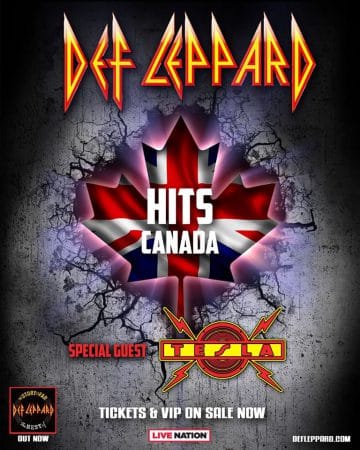 This was a definite upgrade. Last time in Ottawa, back in 2015, England’s Def Leppard played the much smaller TD Place Arena downtown; last Friday, July 19th, they pulled into the Canadian Tire Centre midway through a cross-Canada tour. Although I didn’t hear the announced attendance, to my eyes, the 17,000+ arena was pretty well full to the rafters. Def Leppard aren’t touring to support an album, but are trotting out their classics to an obviously receptive fanbase. This was to be my first Leppard encounter since 1983 at Maple Leaf Gardens on the Pyromania Tour, and I was pretty stoked!

Tour support was provided by Leppard’s old friends Tesla from Sacramento, California, touring to support their latest album Shock. I’ve had several encounters with the band over the years, and am very partial to their classic rock stylings. They were treated well by the headliners on this night — full drum riser, nice lighting, and access to practically the entire stage including the catwalk. Just the sight of the band’s classic backline (grey-screened Marshall cabinets and Ampeg bass rigs) was an indicator of what was in store. I loved the band’s opening — with the house lights still on, guitarists Frank Hannon and Dave Rude (the only ‘non-original’ member) strolled on stage and started trading incendiary licks. Both men are very skilled musicians. As the house lights dimmed, the rest of the band joined the guitarists, and kicked the show off with the classically heavy “Cumin’ Atcha Live” from their 1986 debut Mechanical Resonance.

Immediately apparent was the fine form of vocalist Jeff Keith. The man possesses awesome pipes and a glass-shattering shriek which he employed in all the right places. Tesla played like the true veterans they are — no frills, just seasoned classic rock musicianship and fantastic songs. The band relied heavily on its debut album, also cranking out “Gettin’ Better”, “Little Suzi”, “Changes” and “Modern Day Cowboy” from that record. By the time the band finished up its nearly one hour set with the cover of Five Man Electrical Band’s “Signs”, a significant portion of the arena was on its feet. A nice touch — Jeff Keith noted that the song’s composer, Ottawa native Les Emmerson, was in the crowd. All in all, one of the very best ‘opening’ sets I’ve seen in 40 years of concert going.

Def Leppard employed a cool effect during the intermission, with their stage setup blocked off by black screens and a digital countdown toward their appearance. Lots of great classic rock to keep the audience on its toes, including, to my personal taste, Thin Lizzy’s “Jailbreak.” Finally, when the clock hit 00:00, the house lights went out, stage lights on, black screens up, and the band standing motionless on stage. Very cool and dramatic. Back-to-back Hysteria mega-hits “Rocket” and “Animal” opened the show, and the crowd was on its feet and loving every second of it. At this stage of their career, Def Leppard are a very well oiled machine with their flawless and smooth renditions of their million-selling songs blending seamlessly one into another. Kudos to guitarists Phil Collen and Viv Campbell, who smiled through the set and play through Leppard’s smooth tunes with a nice edge.

Pretty basic set design — the backline was screened off, and the band was backed by an enormous projection screen. All of the musicians took advantage of a long catwalk which led nearly halfway across the arena floor. Vocalist and band founder Joe Elliott sauntered to the end of the catwalk with an acoustic guitar to begin “Two Steps Behind.” Otherwise, the set leaned heavily on the band’s breakthough album Hysteria. As an old Leppard fan, I was a little disappointed that the only ‘old’ songs they played were “Bringin’ on the Heartbreak” and “Switch 625” from High ‘n’ Dry, the latter instrumental sounding refreshingly heavy. Following set-ender “Pour Some Sugar On Me” (of course, the crowd was absolutely insane by now), the band returned for an encore of Pyromania’s “Rock of Ages” and “Photograph”, promising, of course, to be back to the nation’s capital.

Summary… Def Leppard’s set was definitely on the short side. Fourteen songs plus a two-song encore, clocking in at less than two hours. Also, at least to my ears, the band is exceedingly slick, although this could also be because of its song selection from its very commercial MTV era. I would have loved to have heard another of their New Wave of British Heavy Metal classics like “Let It Go” or “Rock Brigade.” I think that Tesla was the better band on the night, offering up a nice rawness and spontaneity despite the band’s veteran pedigree. All in all, a great Friday night of classic hard rock in Ottawa!