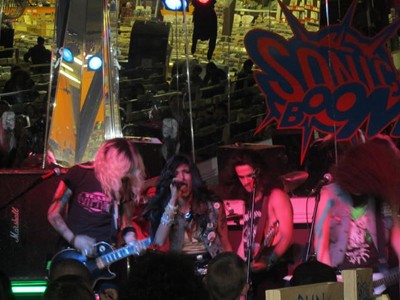 Now some of you may not consider a free six or seven song set performance at a music store as a ‘concert’, but to me a concert is a concert no matter what the venue.

Having never been to a ‘concert’ at a music store before, and having never been to the Sonic Boom Record Store, I was intrigued to see exactly where local Toronto band Diemonds would end up playing. Sonic Boom Record Store is a huge store sprawled out in one BIG room. Now unless Sonic Boom had an additional floor, I could not see where Diemonds could possibly be playing. After making my way through the store, I realized that at the back was a very small stage. Apparently, whoever would attend the show would do so from the various aisles in the record Store.

What apparently prompted Diemonds and eight other bands to play before them at Sonic Boom Record Store was the celebration of International Record Day 2012. Having never heard of all the other bands on the bill, I simply showed up for Diemonds‘ show at 9 pm. Frankly, I had never heard of Diemonds until catching part of their show when they opened for Slash in Toronto about a month ago, but ever since then Diemonds‘ debut CD has been getting regular rotation among the CDs that I have been listening to.

The reason for that was easily confirmed once Diemonds hit the miniscule stage at Sonic Boom and kicked off their six or seven song set with “Trick Or Treat” from their The Bad Pack album. While I really like all of the songs on The Bad Pack, the best songs live were actually the ones which were not my favorites on the CD. Songs like “Loud N’ Nasty” and “Get The F**k Outta Here” worked really well live.

With little room to move, the band simply let the music do the talking playing one great tune after another from their upcoming The Bad Pack CD. Diemonds do have a prior EP called In The Rough, but most if not all of the songs from their The Bad Pack CD are, in my opinion, superior to what can be found on the EP.

Perhaps the band should have gotten a small stool for their female vocalist Priya Panda to stand on because she sometimes looked quite small and short when standing side to side to the two guitarists and bassist — especially to towering guitarist C.C. Diemonds who must be 6 foot 2 or more. In any case, Preya‘s vocals and C.C.‘s guitar solos were excellent. The band played tight and their live renditions were likely played a little faster than the versions on The Bad Pack.

The band closed out their set in front of perhaps 50 to 75 people with their catchy ‘single’ “Take On The Night”.

It is only a matter of time before Diemonds hits the big time so it was a real treat to get to see them play a free show in a music store. My only complaint was that Diemonds‘ set was too short! 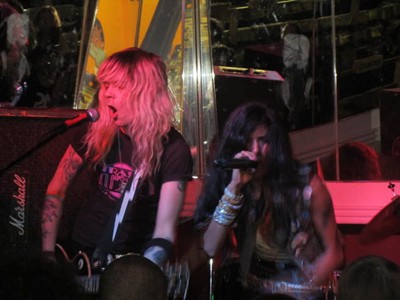