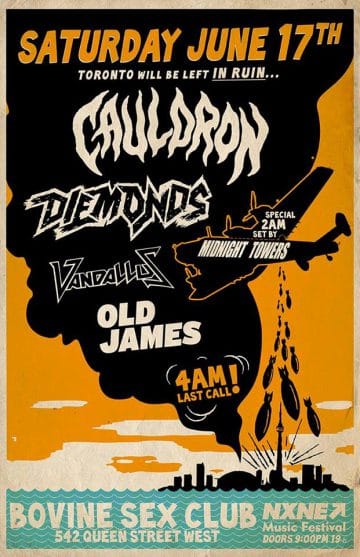 As the final member of The Iron Maidens (guitarist Nikki Stringfield) left the stage after a great performance at The Rockpile, I quickly looked at my phone to see what time it was. Great news as it was only 12:34 am! This would give me more than ample time to make Diemonds‘ scheduled set start time of 1:00 am at the Bovine Sex Club in downtown Toronto.

If you’ve read my review of The Iron Maidens‘ concert, you’ll know that there were way too many concerts scheduled for this particular Saturday night. So many that I had to choose which ones to attend and which ones not to. Given that The Iron Maidens were the first to announce their tour stop in Toronto, I had planned on attending their show which I ended up doing. Later on, both Last Bullet and Diemonds also announced that they were going to be playing that same night at different venues. The chances of making Last Bullet‘s set seemed slim to none but I seemed to have a shot for Diemonds‘ set since the Bovine Sex Club‘s last call was apparently going to be 4:00 am. I eventually sent a Facebook message to Diemonds to find out exactly what time that they would be playing at and guitarist Daniel Dekay ended up responding that while they were scheduled to play at 1:00 am, it would likely be a 1:15 am start. Perfect!

I was able to make it from The Rockpile to the Bovine Sex Club in about 25 minutes without rushing too much and alloting time to find parking on the street. As I walked into the Bovine, I could see Diemonds setting up so I had made it on time! I was greeted by friends Allan and Sleaze Roxx writer Mark Hovarth who had decided to catch some of the earlier bands playing at the Bovine rather than venture out to the west end of the city to catch The Iron Maidens. Given that I had already gotten to see The Iron Maidens play live plus I was going to be able to catch Diemonds‘ entire set, I thought that I had made the best decision out of the three of us!

It seems that ever since getting bassist Tyrone Buccione in the line-up, Diemonds‘ live performances have been on a whole other level and it was the case again on this night. With a rather strict set time to adhere to, the group let the music do the talking as they tore through mostly songs from their latest album Never Wanna Die (which landed the #3 spot on Sleaze Roxx’s Top Ten Albums of 2015 and a remarkable #8 on the Sleaze Roxx Readers’ Top 20 Albums of 2015) with a couple from The Bad Pack, a couple of new songs and the surprise closing track being a cover of Kill Cheerleader‘s “Deathboy” along with a guest appearance from a surprise visitor. Considering that I had seen Diemonds open for L.A. Guns less than two months ago, I was 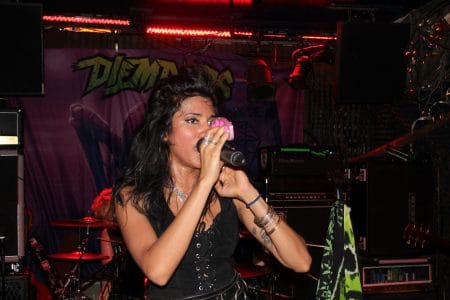 quite pleased that they mixed up their setlist somewhat. Gone were “Loud N’ Nasty” and “Trick Or Treat” (both from The Bad Pack) and in were “Forever Tamed” and “Wild At Heart” (both from Never Wanna Die), “Livin’ Tonight” (from The Bad Pack) and the Kill Cheerleader cover song. I believe that this was my first time hearing Diemonds play “Wild At Heart” which I had always considered the weakest track on Never Wanna Die (not that any tracks can really be considered “weak” on that stellar album) but yet on this night, it sounded awesome!

What I really like about Diemonds is that they have been able to inject even more life into some of their songs when playing them live. The title track from Never Wanna Die was a great song to start off with but live, the band has started to incorporate some “Whoa Oh Oh Oh” type chants at the beginning of the song and throughout until the verses kick in which gets the crowd participating and adds a new dimension to the song! Kudos to Diemonds for doing that! In a way, it kind of reminded me a bit of Iron Maiden‘s “Fear Of The Dark” where you can always hear the crowd singing “Oh Oh Oh Oh Oh Oh Oh Oh” while the intro music of the track plays on as the song takes on a whole other dimension live. This was the second time now that I was hearing Diemonds play two of their new unreleased songs live — “Breathe” and “Our Song” — and I got to tell you, those two new tracks sound fucking awesome! I am ready Diemonds! I am totally ready for your upcoming new album! Please hurry and release it!!!

And what can I say about the Diemonds‘ band members? They were all full of energy and despite the rather small stage, moved around as much as possible. Funny enough, I was speaking to a work colleague of mine who had just gone to see a well established but older band who had their peak in popularity back in the early ’90s. She had noted that the group’s members seemed to tire quite a bit towards the end of their set and my advice was that’s why people need to go see the newer bands play 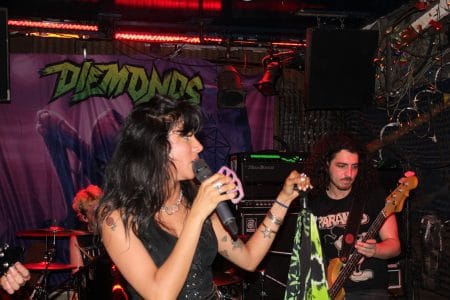 live because they have so much more hunger and energy. As I was telling her that, I was thinking specifically of Diemonds in my mind. The sound for Diemonds on this night seemed really good and that is another area that Diemonds have really improved a lot over the years that I have seen them play live. In prior years, singer Priya Panda‘s vocals were sometimes drowned out by the music but not anymore! I get that sometimes these issues were out of the band’s control as it might not get enough time to properly soundcheck when opening for a more established band but in any case, there were no sound issues on this night.

After ripping through the first ten songs at seemingly break neck speed, Panda announced to the crowd that when she was 16 year old, she had snuck in to the Bovine Sex Club to see Toronto’s iconic band Kill Cheerleader play and what an honour it was many years later, for her to be able to play one of the Kill Cheerleader songs with one of its original members (or something like that). I didn’t know who the guy was but apparently original Kill Cheerleader member Anthony Bleed joined the band on stage for their killer rendition of his former group’s “Deathboy” song. I think it’s the first time that I have ever seen 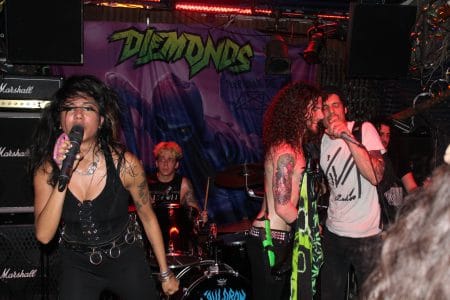 someone perform with a backpack on their back! Backpack or not, it was a fun way to end a killer evening!