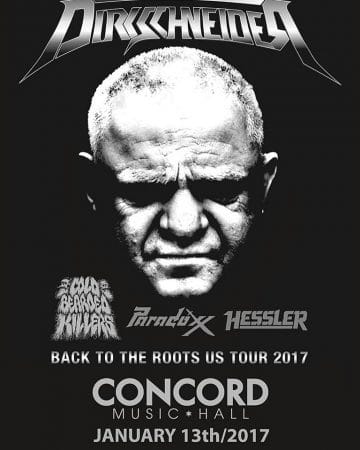 As I was entering the Concord Music Hall, you could feel the anticipation from the fans. The diehard Accept fans were already fired up just waiting in line to enter the Concord Music Hall, which is a great clean venue that has a capacity of 1,500. I’m not quite sure of the exact attendance count for Dirkschneider this night but it was packed. But before Dirkschneider took the stage, we all had to wait and endure watching three bands first. All three bands were Chicago local metal bands. You might remember a few or know a few.

The first band was Hessler, which to my surprise was the first act given that I feel they have more of a future in music as the band members are much younger than the other two bands’ members. Hessler definitely would have benefitted if they had played just before Dirkschneider. When Hessler hit the stage, it was 7:20 pm and the doors had just opened at 7:00 pm so that being said, 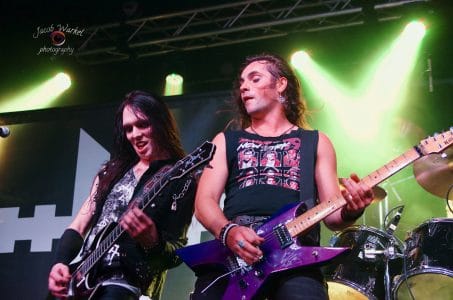 they were playing for people not settled in yet. Hessler went with their new released song from this past October — “Killing Machine” — as the first song of the night from their new album Skeleton Crew, which I thought was a good song decision for an opening song. Igz Kincaid, the founder of Hessler is fronting the band  while handling lead vocals and guitar, which is unlike I’ve seen in years past. Hessler were always known for women fronting them and now Kincaid has taken the reigns, and personally I like them better now than before. Hessler have more fire, more aggression and now a more raw metal feel with Kincaid‘s vocals.

“Intruder” was their second song of the night as well as the second song off their new album. They went straight into, which made me think they were going to just play the new album from start to finish. Guitarist Erik Michael who also handles background vocals looked like a young Mick Mars with his black leather pants, black leather vest and black BC Rich Warlock 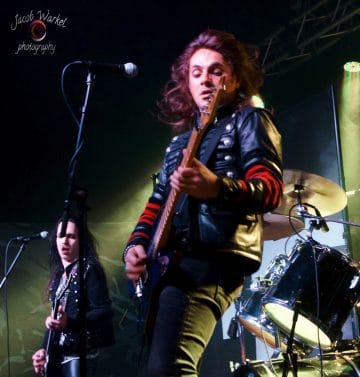 guitar. He was just playing his ass off with his solos, riffs, background vocals and killer energy. Hessler then went on to play “Bad Blood” from their 2011 debut EP Bad Blood, “Black Rose,” “From The Dead” (the last two from the new EP Skeleton Crew), “Animal (Fuck Like A Beast),” and the last song of the night “King Of Sting”… which is the way they made you feel. Hessler were impressive on this night and it was their first ever performance at Concord Music Hall. I feel Hessler are back better than ever! What a great performance!

Hessler playing parts of “From The Dead” ad “Animal (Fuck Like A Beast)” at Concord Music Hall in Chicago, Illinois, USA on January 13, 2017:

As the Concord Music Hall was filling up, the second band Paradoxx took the stage. Paradoxx are a heavy metal band that dates back to 1981-1982 and who have been a staple in the Chicago music scene since the beginning of their existence. Manowar 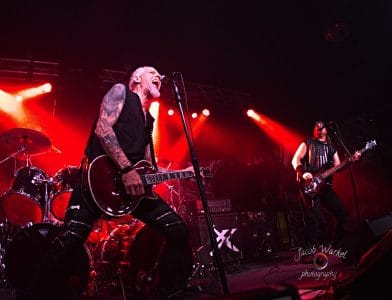 guitarist David Shankle joined them for a short stint after the release of the Plan Of Attak EP in 1985 and Shankle can be heard on their compilation track “Night Ryder.” But most importantly, my condolences go to the Dobbs family and friends as Paradoxx original lead Singer Glen Dobbs lost his battle with stage four lung cancer back on May 10, 2016. The current line-up fronted by his brother John Dobbs on lead vocals and lead guitar came out strong, energetic, engaged and on fire and kept full steam ahead vocally and on his six string the whole set making his brother proud.

Lead guitarist Gary Vermette, who also handled background vocals, was solid on the axe with his solos sounding tight and not sloppy. Former Radakka bassist Randy Jostes and drummer Jerry Weiner proved to be a solid rhythm section as they sounded so tight. I must say John and Gary impressed the crowd with their harmonizing guitar solos. The first song they came out with was “Unbroken” which was setting the tone for what was yet to come from these metal heads. Next up was “Dead Flowers” which kept the crowd engaged. The crowd gave Paradoxx a great response. It was a good call to have them on this bill. Paradoxx continued the night 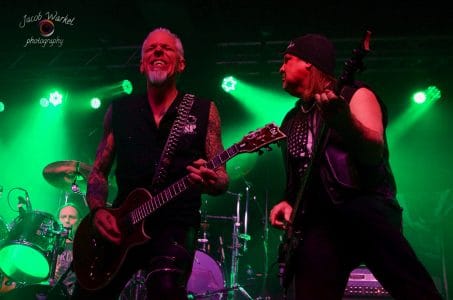 out kicking ass and finishing with “Night Ryder,” “Assassin Of Youth,” “Live Free Or Die” and “Black Siren.” It was a very impressive showing the band featuring three out of five original members. 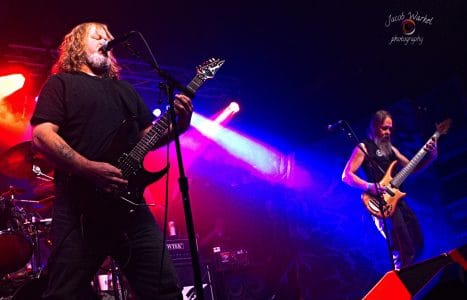 Cold Bearded Killers were the third opening act. They sounded well — basic old school metal — probably because they were old. When they walked onto the stage, they shocked most of the crowd since they were grey bearded old guys. They performed a cover of Johnny Cash’s “Folsom Prison” metal style which to me was their best song of the night, It was a pretty cool version. Sorry, but these guys just didn’t cut it for me. To me, their music resembled the stuff that Chris Holmes is putting out today and vocally, I don’t know who’s better or worse for that matter. I’m going to move on and be nice. 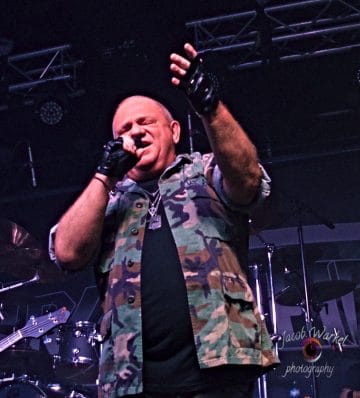 Finally, the crowd was going crazy waiting for Accept‘s famed former singer Udo Dirkschneider as chants of “Udo, Udo, Udo” starts and fans getting impatient as you can feel the tension in the air. It was getting real now as bassist Fitty Wienhold, guitarists Andrey Smirnov and Kasperi Heikkinen, and drummer Sven Dirkschneider took the stage. They were all on their instruments lined up side by side chucking along in front of the drum riser as we were all waiting for Udo to walk out onto the stage. As the screaming, yelling and shouting continued, here came the one, the only, Udo Dirkschneider who took front and center stage as his bandmates continued chunking along and holding their same positions. Udo was feeding off the crowd and the next thing we knew, “Starlight” was cranking and the fans were going nuts. Udo‘s bandmates then moved straight forward as they were now all side by side jamming out the first song of the night, which would turn into a total of 24 songs to be played on this night. Udo‘s son Sven started the second song “Living For Tonight” which was released in 1985 when Sven was only two years old so how crazy is that! Sven who grew up around Accept most of his life knows these songs all too well and looked very comfortable playing those songs with his dad Udo. Sven stayed in the pocket all night, which is what you need from your drummer. As the night went on, the crowd was definitely getting what they paid for and more.

Udo wasn’t running around but he did not have to since he has two young guitarists who definitely know the importance of stage presence. Kasperi Heikkinen played all the Accept songs without a hitch, and his solos were so cleanly performed and flawlessly 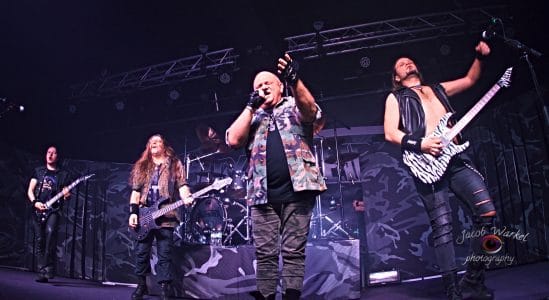 played. Kasperi was always making faces smiling, connecting with the crowd and showing some flash on the guitar. I have to say the same for Andrey as he performed as well as Kasperi. Andrey was nothing but smiles and so much that his face had to hurt after the show. Kasperi and Andrey traded intro solos between the songs “Head Over Heels” and “Neon Nights” which fans enjoyed. Udo should be very happy with his band as in my opinion, you have three out of five guys that are younger that bring energy and excitement to this band. This group that Udo has put together sounded better than what I’ve heard coming from the Accept camp. I must say the Concord Music Hall went to another level when “Balls To The Wall” smacked the crowd upside the head. Accept fans were more than pleased! Hell, they went insane. As the fans were so nuts now, Udo went straight into the final encore song for the night — “Burning” — that made these fans continue to go insane. Udo gave the crowd one hell of a show for sure and those who did not make it on this night would definitely regret it. 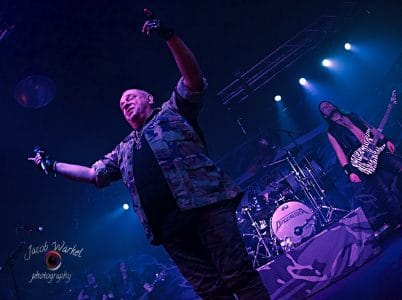 This tour was all about silencing the Accept fans that have been for so many years asking Udo questions such as “Do you remember the words to Accept songs?” “Can you still sing the songs?” “Can you play this song or that song?” “Why don’t you play more Accept songs?” My opinion to that is once you leave a band and you have 15 studio albums that have been successful like U.D.O., do you really need to perform Accept songs? I don’t think so. Most importantly, this tour is and was a real gift to all the Accept fans that have also supported and followed U.D.O. since the beginning. It gave them one last chance to hear the original voice — the one and only Udo Dirkschneider singing the classics they remembered and to answer all those questions that have been asked for so long now. My questions were answered as the 64 year old Udo kicked ass all night. He was engaged with the crowd and he owned that stage singing the songs as powerfully as he had 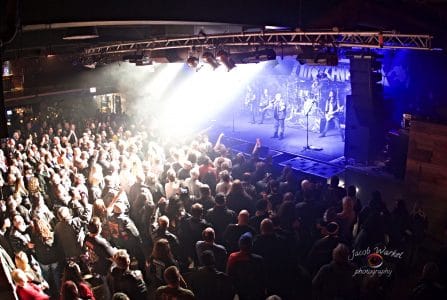 done in his younger days. There was no doubt that this was a great night. 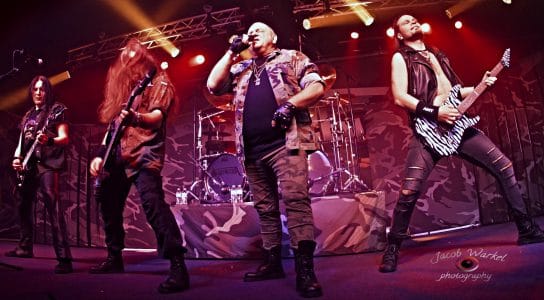