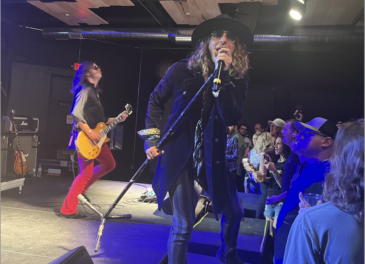 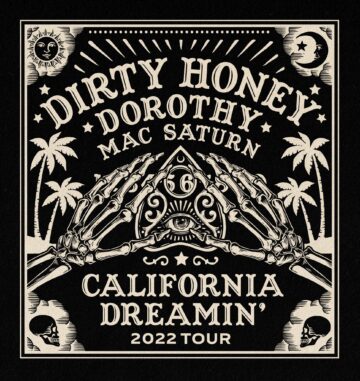 I received a couple of e-mails in early June notifying me of some local dates for the band Dirty Honey in the upper Midwest, United States, with back-to-back shows on Friday and Saturday, August 26th and 27th, in Minneapolis, Minnesota and Fargo, North Dakota respectively.  Since I first heard Dirty Honey, I’ve been keeping a watch out for them to be able to get to a show and see them live.  Their earlier Young Guns Tour with Mammoth WVH didn’t come close enough to me to be able to take them in. I live right in the center of Minnesota so now, just like that, I had two choices of where to go see the band. My home is approximately a two hour drive east to the Twin Cities of Minneapolis/St. Paul, Minnesota and also approximately a two hour drive to the west to the Fargo, North Dakota/Moorhead, Minnesota area. I like good rock and roll and beer so when I saw the Saturday night show was slated to be outdoors at Fargo Brewing Company, the choice was easy. I have a brother-in-law from Jamestown, North Dakota who introduced me to the brews from Fargo Brewery a couple years ago so I was familiar with their beer but had not been to the actual brewery.

Jade Presents is the promotional company in Fargo that has been bringing big name acts and events to the Fargo/Moorhead area for 30 plus years and in recent years, I have looked to that area for more events that I am interested in. I purchased tickets for my wife and I to attend this Dirty Honey show with opening band Mac Saturn. The day before the concert, I was notified that the event was no longer going to be held outdoors but was moving indoors to The Hall at Fargo Brewing Company, which is a small venue that I’m told holds a capacity of a few hundred people.  We arrived at the brewery at 6:00 Saturday night and were let into The Hall at 6:45. By 7:30, we made our way to the stage for the 8:00 start and were able to get right up in front on the left side of the stage.

Mac Saturn is a brand-new band from Detroit, Michigan. I was told the band formed over the pandemic and this was their first tour. I was not real familiar with them but had checked out some of their music and videos on the internet. The group of five 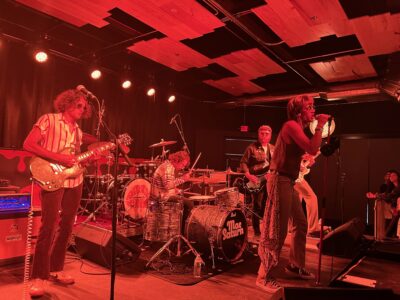 young guys is fronted by Carson Macc, with Nick Barone and Mike Moody on guitars, Jive Moses on bass, and Angelo Coppola on drums.  The band has a very 70’s sounding funk, pop and blues mix and since they’re from Detroit, you have to figure in some Motown in their sound as well. The band played very well and was very tight considering this was just their third show of the tour. They played nine songs on a playlist that was very well put together. Highlights of the show included all five songs from their new EP titled Until The Money Runs Out. The EP includes two songs they have given the video treatment to —  “Diamonds” and “Mr. Cadillac”.  The band closed with “Plain Clothes Gentleman” from their new EP. “Plain Clothes Gentleman” started out with a slower swampy sounding intro before the band then kicked into high gear to close out their set. Mac Saturn‘s new EP is available on their website at macsaturn.com. I 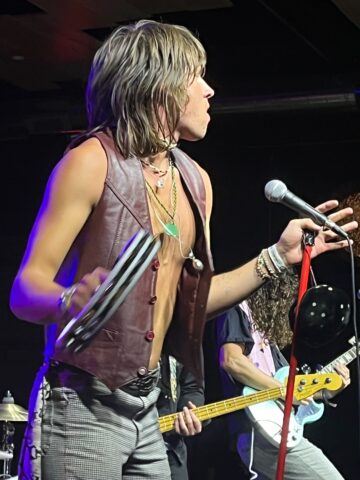 was able to pick up a copy at their merch table at the show. I’m sure much of the crowd at this show was not real familiar with Mac Saturn but the band put on a great show and put smiling faces on everyone in The Hall.

After playing for a couple of months on their first European tour, Dirty Honey returned to the United States for what looks like the second leg of their California Dreamin’ Tour. The band released a six song EP in 2019 and a follow up eight song self-titled full-length album was released in 2021.  The band has a small library of original songs to play so we figured to hear most of that library with the band back headlining. Here in central Minnesota, we get the chance to hear Dirty Honey on the rock station out of St. Cloud, Minnesota while the classic rock station in Alexandria, Minnesota has also added Dirty Honey to their playlist. As most people know, the state of Minnesota is big into the sport of hockey and when Dirty Honey opened up the National Hockey League’s Winter Classic game between the Minnesota Wild and St. Louis Blues on New Year’s Day with a kick ass cover of Prince’s “Let’s Go Crazy”, they gained added interest from the folks here in The State of Hockey. You can’t knock four guys from Los Angeles, California producing a music video on a frozen lake near Duluth, Minnesota last December. Hopefully, they had plenty of Minnesota Hot Dish to keep them warm during that production.

As the sound system in The Hall faded to the band’s PA, AC/DC’s “Rock ‘N Roll Damnation” brought Dirty Honey to the stage.  The band opened with “Gypsy” and then went into “California Dreamin’” both from their latest self-titled album. Lead singer Marc Labelle then addressed the crowd as the band then went into “Break You”, “Heartbreaker”, “The Wire”, and 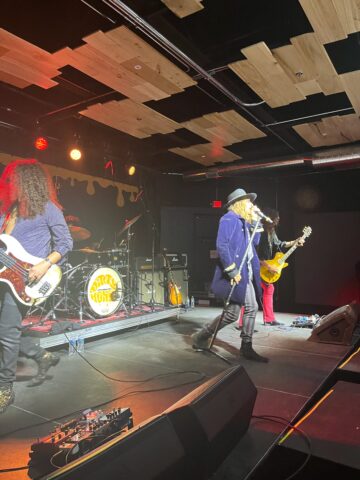 “Scars”.  Bass player Justin Smolian was left on stage alone and went into his pounding bass solo. An interesting observation on Justin is that he plays left-handed. My wife and I were able to get a spot right to the left side corner of the stage, so when Justin stepped up to the front of the stage, it looked like he was going to whack my wife in the head with the neck of his bass, whereas the other guitar and bass players were all right-handed so their guitar necks all faced in the opposite direction.

The entire band was back on stage and then played “Tied Up”, and “Down The Road”. The great rock and roll raspy voice that Marc Labelle has led the crowd into their next song which Marc said they produced for Amazon, and with their classic blues sound reminiscent of Aerosmith and Led Zeppelin, it was very fitting to hear their cover of Aerosmith’s “Last Child”. This was a great cover with Labelle’s vocals and a very loud chugging of John Notto’s guitar, Justin Smolian’s bass, and Corey Coverstone’s drums behind him brought the band into peak form. They then went back to the Dirty Honey library with “No Warning” and “Another Last Time”. The stage then emptied again as drummer Corey Coverstone was left alone to perform his drum solo which led into John Notto’s guitar solo. Dirty Honey’s songs all start with a great riff from John Notto so it was great to see him get the chance to turn the crowd on with an awesome solo. Notto then led the band into their two final songs, two of their biggest, “When I’m Gone” and “Rolling 7s” to conclude their set.

But really? Was it over? The band left the stage and The Hall’s PA music even came back on. The crowd wanted one more song.  They can’t be done yet, could they? “Let’s Go Crazy” was listed as the last song on their setlist, which I could see from my close up view. Surely they played it the night before just a couple hundred miles to the southeast off I-94 in Prince’s home town of Minneapolis, Minnesota. Tonight’s upper Midwest crowd wanted to also hear the Honey’d up version as well. After a short delay, the band came back on stage and played their one song encore of the cover of “Let’s Go Crazy” and then a fantastic night of great rock and roll music came to an end.

It was great to see these two new rock bands in a small, very intimate club setting like this. Marc Labelle is a great frontman. Wearing his trademark wide rimmed fedora, Labelle did pretty much all the vocals for the entire show. With only one microphone set up on the stage, there was only a couple of times that John Notto joined him on the mic for added harmony. Labelle has a great supporting cast from John Notto, Justin Smolian, and Corey Coverstone. The cover songs they performed 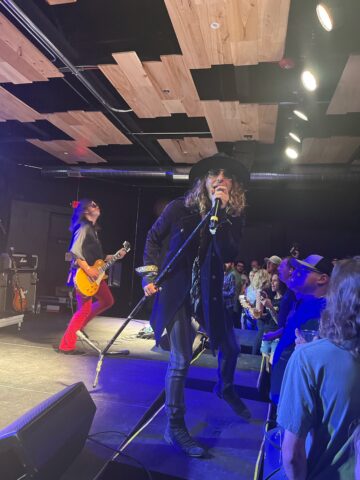 were fun but the highlight was hearing their original songs with the crowd especially getting into their songs “Down The Road” and “Another Last Time”. I always like to thank the bands and band members for coming all this way for us to see them perform and see their songs come to life in a live setting. Thank you to Mac Saturn and Dirty Honey for a great Saturday night in Fargo, North Dakota.