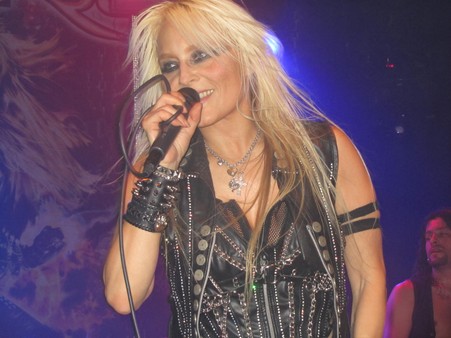 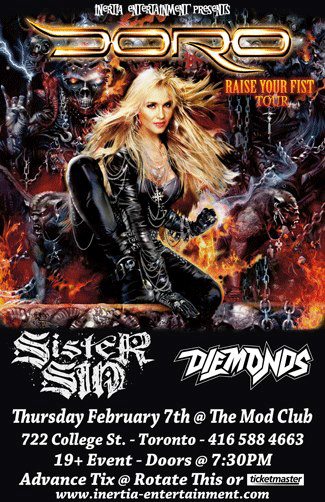 ‘Girl power’… Those were the words uttered at the end of the Doro concert in Toronto by drummer Johnny Dee to the crowd. How right he was.

On a snowy evening with blizzard like conditions, Toronto was treated to a concert clearly demonstrating ‘girl power’ and featuring three of the best female fronted bands in metal today. The headliner was none other than the legendary and queen of metal, Doro Pesch, who is reaching her 30th year anniversary in terms of carrying the heavy metal banner. The “regular” opening band for Doro‘s North American tour was Swedish sensation Sister Sin fronted by the hot (part-time) personal trainer Liv Jagrell, whose energy was something to behold. The “guest” opening band for Doro‘s stop in Toronto was the local band Diemonds, who is fronted by the pretty and sexy Priya Panda. I would have gladly paid my concert admission to just see one of those bands, so to have all three playing under the same roof in one evening was simply fantastic! To add to my excitement and buildup to the evening, I would rank Diemonds‘ ‘The Bad Pack’ and Sister Sin‘s ‘Now And Forever’ CDs as my two favorite new CDs of 2012. 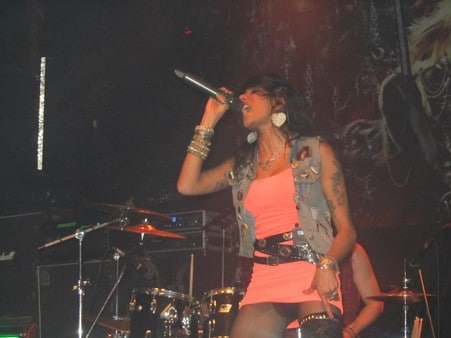 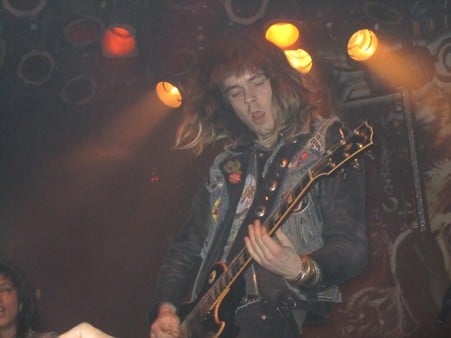 Diemonds kicked off the evening in high gear with “Trick Or Treat” and “Loud N’ Nasty”. What Diemonds does very well is to speed through their shortened set — due to being the first band to play — with one rocker after another. I believe that they were able to squeeze in eight songs in about 30 minutes. All of the songs played that night were from their ‘The Bad Pack’ CD, aside from “Highway” which originates from their ‘In The Rough’ EP. Guitarists Dan Dekay and C.C. Diemond were in fine form trading leads on songs throughout their short set. Having seen Diemonds play numerous times in Toronto in the last eleven months or so, I can say that the band keeps getting better and better, and it is neat to see them refine and evolve their live show every time. Diemonds are definitely a band that should make the big time. 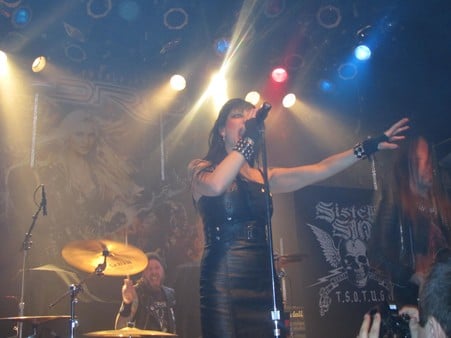 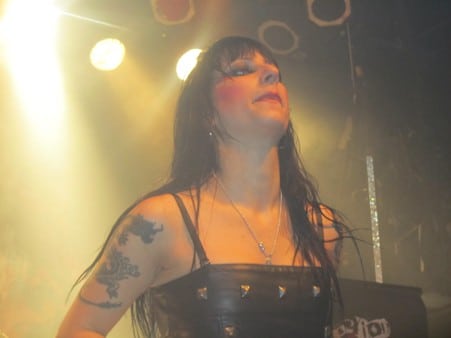 Next up was Sister Sin. To put it simply, I was blown away by their performance and energy. After playing the first two songs, “End Of The Line” and “Fight Song” from their newest CD ‘Now And Forever’, lead vocalist Liv Jagrell reminded the crowd that the last time Sister Sin played in Toronto she was really sick. I was at the band’s prior show in Toronto, back in 2011, and despite being quite sick Liv struggled and got through the show. Clearly that was not the usual Sister Sin, because this time around the stunning vocalist had to be the one person who expanded the most energy and moved around the most out of all the performers. Decked out in what looked like a leather dress/mini-skirt (although not as short as Diemonds‘ Priya Panda) with a few studs, Liv ran the whole gamut that night from jumping/hopping in one spot to blowing kisses to the crowd between songs to doing some serious headbanging. The rest of the band also kicked butt — bass player Strandh was a bundle of energy and interacted with the crowd quite often without undermining the lead vocalist’s own crowd interaction. Guitarist Jimmy played to perfection and was in charge of the “crowd” photo that Sister Sin apparently takes at every one of their North American tour stops this time around. Rounding out the band was drummer Dave who was a beast on his drums and could be seen singing along to all the lyrics. 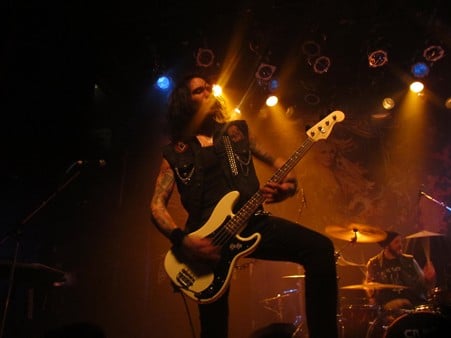 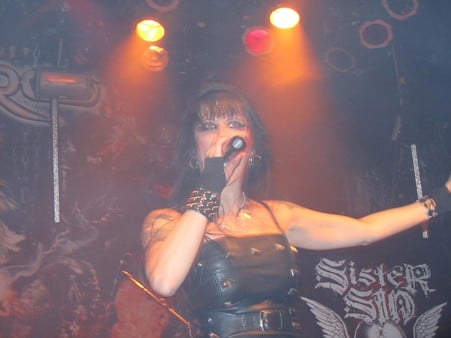 Sister Sin obviously made quite the impression since all their CDs were sold out by the time their set was over. Either that or they seriously underestimated how many CDs to bring to sell to the Toronto public. In any case, I was pleased to have been able to purchase their EP ‘Smash The Silence’ before it sold out.

At the end of the day, no matter how good the performance may be, you need the songs to back it up and Sister Sin simply had one fantastic anthem after another to offer the crowd. My favorites were “Sound Of The Underground”, “24/7” and show closer “Better Than Them”. Sister Sin does such a good job on “24/7” that you would never know that it is an U.D.O. cover song. The Swedish rockers simply own that song and frankly, it is better than the original version of the song. Other tracks played included “On Parole”, “The Chosen Few?” and “One Out Of Ten”… Enough said. Sister Sin put on a phenomenal performance — please come back to Toronto soon! 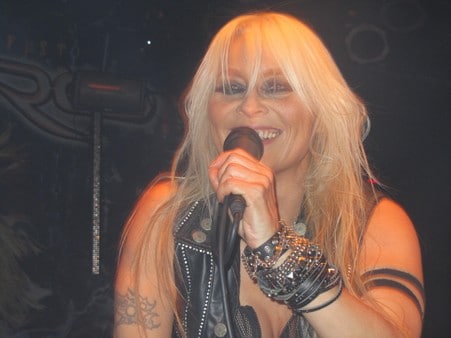 The scary part was that the evening was really just getting started, since Doro had yet to hit the stage. Just like during her concert for her ’25 Years In Rock… And Still Going Strong’ DVD, Doro had a permanent smile on her face from start to finish. She simply loves what she does and nothing is more evident when she is up on stage. Hitting the stage with the classic “I Rule The Ruins”, Doro and her band kept firing one song after another in between the front-woman thanking the crowd many times. Doro delivered all the hits while going “old school” many times, including playing early Warlock favorites “Burning The Witches” and “Metal Racer”. She even reminisced on some of the older tours that she had had including Warlock‘s 1988 tours with Megadeth and in 1987 with Ronnie James Dio. The latter was paid tribute with the song “Hero”, from Doro‘s latest CD ‘Raise Your Fist’. Speaking of her new CD, Doro only played three songs from that album and the other two, “Revenge” and “Raise Your Fist In The Air”, should be regular staples of her live show for years to come. 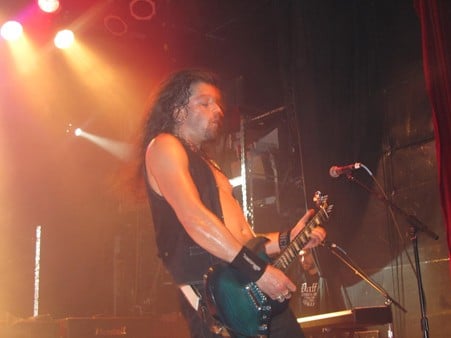 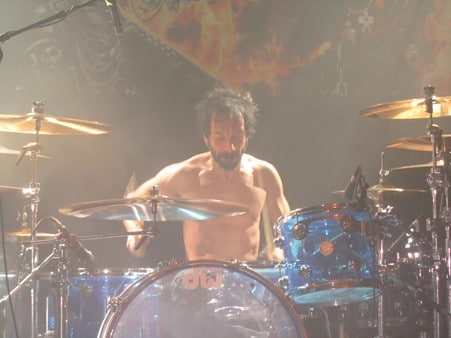 Although Doro played quite a few songs from her back catalog, I would have liked her to play some of her newer songs such as “You’re My Family” and “Night Of The Warlock”. However, she can be forgiven given that she has so many great songs to choose from her fifteen studio albums via Warlock and her solo career. As expected, her 1987 ‘Triumph and Agony’ album with Warlock was the best represented with the four classics “I Rule The Ruins”, “East Meets West”, “Fur Immer” and the crowd favorite “All We Are”.

Ever the gracious entertainer, Doro complimented the venue holding the concert within one or two songs, stating that this was her first time at the Mod Club but that she thought she was really going to like it. Other bands can certainly learn a thing or two from her. The venue Mod Club worked out really well — likely due to the blizzard like conditions in Toronto that evening, the club was not full by any means allowing everyone to wander around, and in some cases socialize, with ease. Doro closed out the show with her awesome cover of the Judas Priest classic “Breaking The Law”.

Unlike many concerts that I have attended, I felt that I had received way more than what I had paid for. It will no doubt be very tough for any concert that I attend later on in 2013 to top this one. Thank you Doro, Sister Sin and Diemonds — ‘Girl power’ rules! 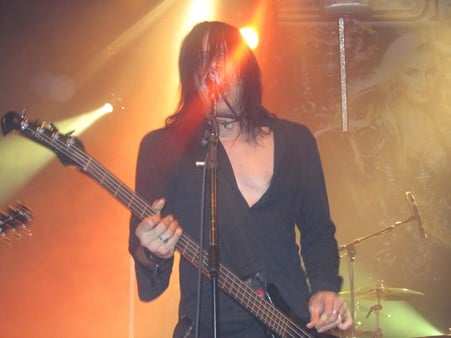 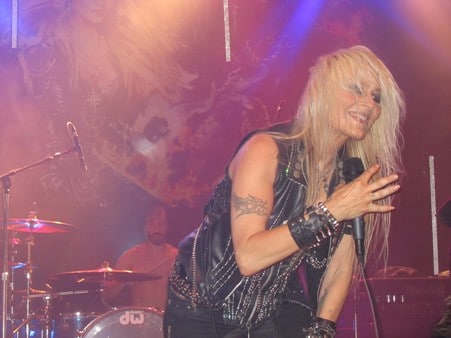