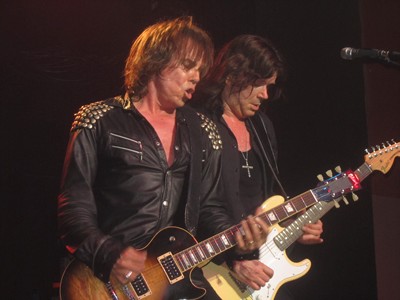 EUROPE WAS WORTH THE LONG WAIT!

With Europe reuniting back in 2005, I would have never guessed that it would take me ten years to finally see the Swedish rockers perform live. I started wondering if I would ever get to see them in a live setting after missing their initial foray in North America when touring in support of their comeback record Start From The Dark — considering they failed to come here to support their next three studio albums, Secret Society, Last Look At Eden and Bag Of Bones. How was I supposed to know that a band of Europe‘s caliber would play a relatively small club in Toronto back in 2005? This highlights the problem that the band have encountered in the American market — they can easily sell out arenas and headline large festivals in Europe, but sometimes play in relative obscurity here. You can’t blame the band for sticking to playing markets that appreciate them a lot more.

In any case, I was thrilled to hear that Europe would finally be playing dates in America again, this time in support of their latest studio album War Of Kings. I initially thought my only chance to see them would be as the M3 Rock Festival headliners in early May, however with a work trip to Sault Ste Marie on the Canadian side looming, I began to see that I might be able to catch one of the band’s nine North American dates. With some skilled scheduling, I was now going to be staying overnight in Sault Ste Marie on the night Europe were playing the “sister” city of the same name on United States soil. With only a fifteen minute drive from Canada to the Kewadin Casino, I was absolutely stoked to be able to catch Europe play their first show on North American soil — if you don’t count their recent Monsters Of Rock appearance — in ten years!

To make the Europe concert even better, Sault Ste Marie residents Sammy and KC, whom I had had the pleasure of seeing Motley Crue (with Alice Cooper opening) with back in July 2014, decided to catch the concert as well after I announced my plans to attend. Given that Sammy was only getting off work a half hour before the scheduled start time of the opening act, Black Star Riders, I elected to meet them at the venue rather than risk missing the band that has a truly phenomenal pedigree due to its former Thin Lizzy incarnation. 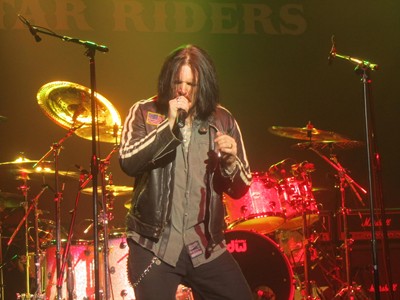 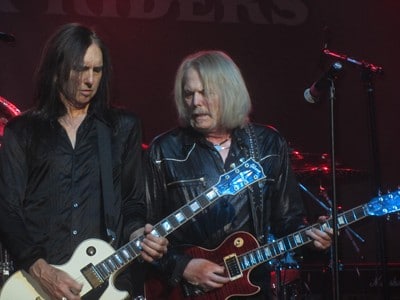 Black Star Riders hit the stage with “Bound For Glory”, a track that I did not recognize but which sounded good on a first listen. In fact, I was not familiar with any of Black Star Riders‘ material aside from hearing a song here and there — but of course I knew the Thin Lizzy material. In any case, this oversight will be rectified in the immediate future as I really liked the Irish tinged hard rock and metal that Black Star Riders delivered. Although guitarist Scott Gorham is clearly the best known and revered band member, due to his prior tenure in Thin Lizzy, I thought that the star of the show was lead vocalist and guitarist Ricky Warwick. He did a great job of getting the crowd going before the headliner, and before the group had played a single note he told the crowd to get up on their feet, given that this was a rock concert. Warwick also led the crowd through a few “sing after me” sessions and during virtually all the songs included “clap with me” hand signals.

While there was no question that Black Star Riders received the most enthusiastic crowd response for their Thin Lizzy material, including “Jailbreak”, “The Boys Are Back In Town” and “Whiskey In The Jar”, I really enjoyed their new tracks that had a real Irish feel to them. Unfortunately, I am unable to name off these songs, but I suspect they all came from their recent studio records, All Hell Breaks Loose and The Killer Instinct. Every band member seemed really into the show, including tall and lanky guitarist Damon Johnson and bassist Robbie Crane, who seems to love to play his bass as high up in the air as he can. The band played what I consider to be an extended set for an opening band, and while I didn’t count all the songs they played it was easily over ten. Black Star Riders did everything they were supposed to do as an opening act — getting the crowd pumped and ready for the headliner. Along the way, they made at least one new fan (me) that looks forward to discovering their two studio albums. 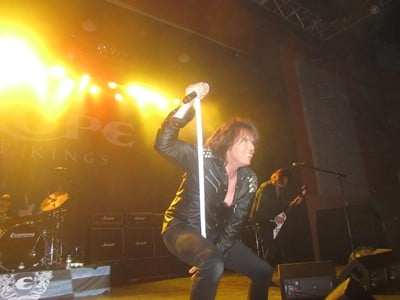 Europe are one of the bands that I have been longing to see live ever since discovering them with the release of The Final Countdown back in 1986. They are probably one of the only bands who have released at least ten studio albums (along with KISS, Dokken, Van Halen, W.A.S.P., and Iron Maiden) for which I have actually bought most, if not all, of their material. Europe hit the stage with the title track from their new record War Of Kings, not one of my favorite songs by any means, but given that this was the first time seeing them perform it was exciting nonetheless. From then on, the group picked up the pace with “Hole In My Pocket”, one of my three favorite tracks from their new record, and the classic “Rock The Night”. I think it took another two stellar recordings (“Ready Or Not” and “Superstitious”, from my favorite Europe album Out Of This World) before frontman Joey Tempest really addressed the crowd.

While the Kewadin Casino’s DreamMakers Theater was unfortunately not filled to capacity by any means, Tempest remarked to the audience that the band (and just about everyone) was aware that Sault Ste Marie was excited about the hockey being played, namely the playoff game between the NHL teams Detroit Red Wings (who are based in the state of Michigan) and Tampa Bay Lightning. While that is true, I think the audience number at the Europe concert was also markedly and adversely affected by the sold out (almost 5,000 people attended) “local” playoff hockey game on the Canadian side taking place between Sault Ste Marie’s beloved Greyhounds and the anticipated NHL number one draft pick Connor McDavid’s Erie Otters. In fact, I heard tickets for that game were reselling for $300 apiece, which is something really unheard of for junior hockey as far as I know. Considering that the hockey mad Sault Ste Marie boasts a combined population of about 90,000 between both countries, this turned out to be unlucky timing for the Swedish rockers. 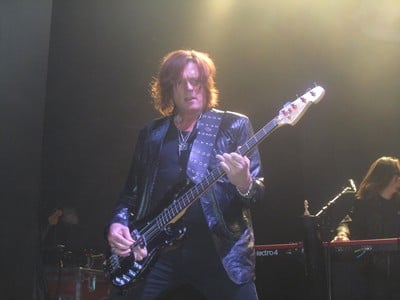 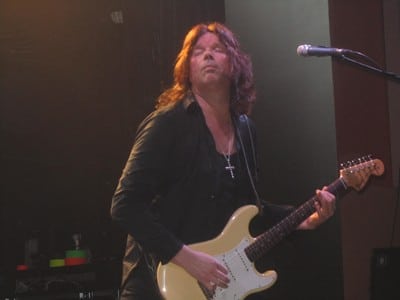 Despite what I would consider a somewhat disappointing turnout for a band of Europe‘s stature, Tempest chose to look at the bright side of things, pointing out that when the band played in Detroit ten years ago it was in a small club with only about three males in attendance. While looking at the obviously much larger crowd in front of him, Tempest exclaimed success at the turnout when compared to that fateful club gig.

Europe performing “Cherokee” on April 23, 2015 in Sault Ste. Marie, Michigan at Vegas Kewadin Casino. This was the first date of their American tour with Bl…

The one absolutely great thing about the venue at Kewadin Casino is that there are chairs for all concert goers but people can make their way to the front of the stage at anytime and for the duration of the show. In addition, people in Sault Ste Marie are apparently somewhat passive or laid back — at least compared to Toronto crowds where fans would park themselves in front of the stage and never move — because Sammy, KC and I were able to waltz (maybe five to ten minutes prior to the headliners appearing) all the way to the front of the stage. Sammy and I ended up having a stand-up center front view for the entire evening while KC was able to go for a washroom break and drink refill during Europe‘s set without any problems reclaiming her spot in the crowd. I must have been really into the show because Tempest pointed out halfway through the show that the band had released five studio records since reforming ten years ago and “some guy” (that’s me) even knew all the words to the new songs before grabbing my hand in acknowledgement. It’s true that I was singing along with Tempest to pretty much all the songs — and perhaps quite loudly. 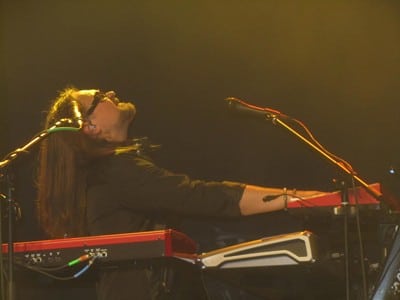 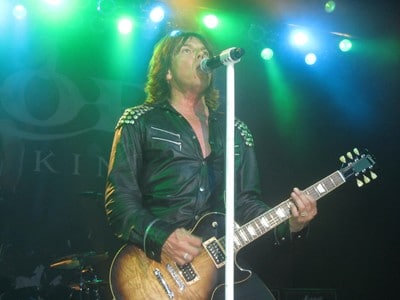 Europe as a whole sounded simply fantastic and are a true polished machine in a live setting. There were no miscues of any kind that I could spot. While time usually does not erode a musician’s ability to play an instrument, the one downfall of bands originating from the ’80s era is that the lead singer’s voice often gets worse as the years progress. That does not appear to be the case for Tempest, whose voice still sounds amazing after all this time. Man, this guy can sing, and at this point has to be considered one of the best vocalists out there. Sure, he does not hold a scream for as long as Sebastian Bach or Bruce Dickinson, but the man can really sing and he does it really well. All of the band members also sounded great on this night, with bassist Jon Leven and drummer Ian Haugland laying down a steady groove, keyboardist Mic Michaeli looking very Jon Lordish and rather sedentary guitarist Jon Norum playing solos note for note and sounding amazing. It was nice seeing Tempest introduce all of the band members and noting that he started the band with Norum so many years ago.

Given that I was so pumped to see Europe, I readily admit that they could have played any song from their catalogue and I would have been a happy camper. That being said, the setlist was very good and even some of the new songs that I wasn’t so fond of from War Of Kings sounded really good. In particular, I was impressed with “Second Day” and “Praise You”, which sounded so much better live — and set closer “Days Of Rock ‘N’ Roll” is, in my opinion, sure to be in Europe‘s set for many years to come. There was only one track played from the band’s first two studio records, in the form of the fast paced and rocking “Scream Of Anger”. Funny enough, in my mind I had always thought “Girl From Lebanon” was from one of the band’s first two albums, but as I was writing this review realized that it emanates from Prisoners Of Paradise — an album that I have often overlooked but will soon be revisiting. I was very pleased to hear two songs from ‘Last Look At Eden’, namely the title track and “No Stone Unturned”, given that I consider that album to be the best of the band’s post-reunion output.

Europe ended the show on a high note with the easy to sing along to “Cherokee” and the rocking “Days Of Rock ‘N’ Roll”, before coming back for the obvious song missing from their set, the all-time classic “The Final Countdown” — which brought goose bumps to my arms and had the whole venue hopping and rocking! If you get the chance to see Europe play on their rather small US tour, make sure you grab the opportunity because they are one of the best live bands that I have ever seen. 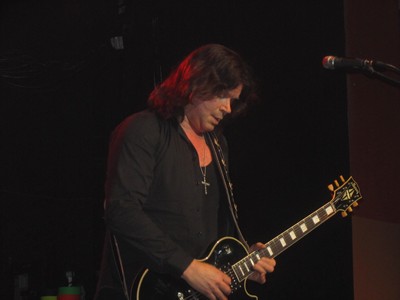 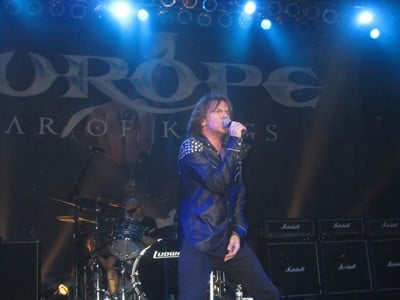