EUROPE AND DEVILSTRIP DOMINATE IN CLEVELAND!

This review may be a little unorthodox; the perspective a bit odd. My name is Graig Lindgren and I am the bassist for the band Devilstrip that opened for Europe at the Cleveland House of Blues. Here’s the experience from my eyes/ears.

When me and the other boys in Devilstrip showed up at the load-in dock behind the House of Blues, I could already hear the guitar wailing. I recognized the tone almost immediately — John Norum. It was right then and there that I knew the night would be special, memorable and magical. We loaded in all of our gear and headed to our dressing room, which was adjacent to Europe’s quarters. I quickly moved down the ramp to the stage to catch a glimpse of the guitar God in action. Side note: This is an awesome perk of being in the support band – getting to witness all of the behind the scenes activities. Just then a familiar face strolled down the ramp – Joey Tempest. I thrust my hand out and professed my longtime fandom. Although he was clearly en route to the soundcheck, he politely obliged and thanked me genuinely before running off. When Europe finished with their pre-show production, the HOB crew moved our gear onto the stage where we quickly setup and checked. This is when we first discovered the enormous backdrop, which was the War of Kings album cover (cue goosebumps). 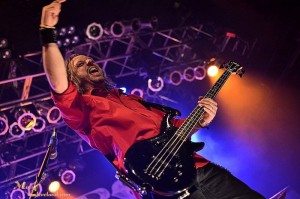 We retired to our dressing room to prepare for the show. About 10 minutes prior to showtime, my bass tech informed me that the place was packed and that it was time to head out. I grabbed my bass (triple-checking that the wireless pack was on) and headed down the ramp and over to my side of the stage (stage right). Just then our intro music started to play, which is an acoustic guitar number laden with voodoo overtones. As the stage lights slowly faded from black to an evil red, I could hear the crowd getting louder in anticipation. Jimmy Gray, our drummer, walked on stage and climbed behind his kit. Our intro then descended into an evil array of feedback and chaos. 4 clicks later and BOOM, a wall of lights and sound explode as Marc Wasmund, lead singer and guitarist, and I sprint to the center of the stage jamming our first song “Not What You Need”. Although with the stage lights nearly blinding me, I could still see four or five rows deep into the crowd and much to my pleasure, everyone was rocking, devil-horned hands in the air. 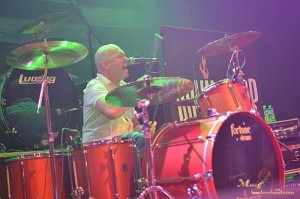 We continued playing all the best stuff from our debut album Rise; the melodic & sexy “Including Me”, the sleazy “Are You Ready”, and the 90 mph punk rocker “Kill The Headlights (Roll)”. Every song just kept getting better responses (pinch me)! We finally finished our 45 minute set with our high-powered closer “Go” to a raucous cheer! At that point, we all sprinted out and headed to the lobby where we had our merch booth for a meet-and-greet. We were floored at the response we received, signing more autographs that night than ever before. We also sold the most merch of any previous show. To sum it all up in just a few words “major success”!

About 20 minutes later, I heard the rumblings of a synthesizer. I knew what was coming so I grabbed everyone I could and ran inside to catch the feature act. The stage was black but the crowd was

already going crazy. The intro featured a military beat with ominous war-like overtones and it set the table perfectly for what was to come. Blinding white lights hit as Europe pounded into their newest album’s opener “War Of Kings”. I’d been boning up on my Europe tracks leading up to the show and this particular album just got better and better every listen. Hearing the songs live and loud just took the whole experience to a new level! Their second song was “Hole In My Pocket” and featured some killer vocals. Whatever Holy Grail Joey Tempest has been drinking out of has served him very well. His voice is as pure as it has always been. And judging by the ladies’ comments that were in attendance, his looks haven’t fallen by the wayside either.

The band continued to jam through their catalog much to the delight of the crowd. By the time they came to the MTV monster ballad “Carrie”, Europe was in full swing. As expected, a million lighters (and smart phones) went up in the air as the entire

crowd sang along. A couple other new songs, “Second Day” and Praise You”, went over really well. Then they changed gears a bit and played one of my favorite songs “Girl From Lebanon”, which starts with a sweet and soulful guitar solo by none other than John Norum. “Let The Good Times Rock” and “Rock The Night” kept the party going. It was at that point that I realized just how amazing it is for a band to play 80’s music but somehow manage to keep the songs fresh and modern sounding. It’s remarkable. At one point I headed back to the stage and stood on the side with my tech, just absorbing every drop of the experience. As Norum launched into a guitar solo, Tempest ran off the stage and stood right next to us to catch his breath and a quick drink of water. He glanced over at me and caught my eye. Before running back out on stage, he pointed at me and said “You guys f#%@ing rock”! I turned and asked my tech if that just happened and he assured me that it did. Night = made!

Europe ended their set with another quality song from the new album “Days Of Rock ‘N Roll” and the stage went back to black. But not one person would leave. No one headed to the exits. The encore was what everyone had come for. After a few minutes the familiar synth of one of the greatest rock anthems began, “The Final Countdown”. I had goosebumps on top of goosebumps. My mind jumped back in time to 1986 where my 15 year old self was watching MTV like it was my job. This band did not disappoint. The song was played flawlessly and the Cleveland crowd went wild! Though this night will not soon leave my memory bank, this song was certainly the cherry-on-top for me.

And THIS show is the very epitome of why I play rock and roll.