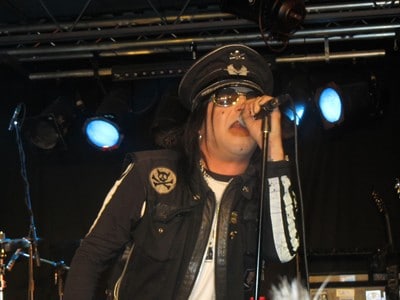 TORONTO ROCK AT ITS FINEST

If one thing was proven on Easter Sunday 2013, it was that Toronto hard rock and heavy metal is doing well and in good hands going forward. Diemonds, Last Bullet and J’Nai — three of the best hard rock and metal bands that Toronto has to offer were all on display — add sleaze rock pioneers Faster Pussycat as the headliner and you had one fantastic night of rock n’ roll.

Perhaps the most difficult thing leading to the show was figuring out which bands were actually playing on the bill, aside from headliner Faster Pussycat. It seemed there was a bit of a game of musical chairs going on with the bands leading up to the show. The early posters for the show advertised Faster Pussycat, The Art, Diemonds, Last Bullet and Left Turn City. By the time that Easter Sunday rolled along, six bands were being advertised with two new opening bands, Vivid Eye and J’Nai, with Left Turn City apparently dropped from the line-up for whatever reason. After checking a few of The Art‘s videos leading up to the show, I must say that I was not excited to see that band since I did not really like what I had heard, and frankly their material did not seem to fit in with all the other bands’ harder rocking sound. By the time that I got to the show — missing opener Vivid Eye‘s set — I was pleased to find out that The Art was not playing after all. 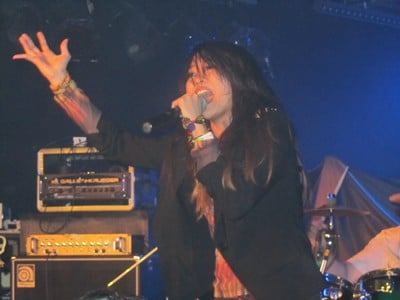 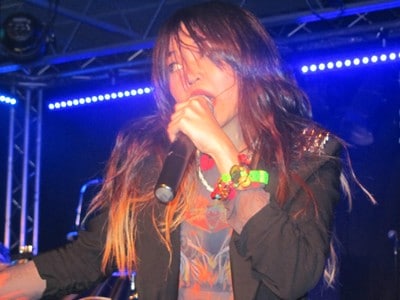 The first band that I got to see was J’Nai. I knew them strictly from a positive review of one of their prior shows a few months back and at first I did not know what to make of this band. All of the band members, aside from drummer Rui Cimbron, looked really young. One guitarist even had a Samurai sword in its case attached to his back — the sword was eventually taken out and swung around briefly and impressively. The other guitarist wore a bright green polo sweater that matched his bright green guitar along with matching orange hair and pants!

J’Nai wisely opened their set with the Heart classic “Barracuda”, quickly proving to the crowd that they could rock and had the needed musical pedigree. Given that vocalist J’Nai, bassist Dave Alcordo, and guitarists Richie Nguyen and Stephan Nakamura are all fairly short in height, the stage seemed pretty big for them. The band took full advantage with their high energy and singer J’Nai‘s wacky dance moves. After “Barracuda”, J’Nai launched into one original after another from their debut CD called, surprise surprise, ‘J’Nai’ — along with one new unreleased track entitled “Gone”. Having never heard J’Nai before I was impressed with their original tunes. Their songs were really good, albeit a little different with some of the tempo changes. What was clear was that lead vocalist J’Nai has a fantastic voice and a bright future. She seemed like a pro out there and was good at interacting with the crowd. By the time that the band tore through their closing number, a rousing version of Guns N’ Roses‘ classic “Welcome To The Jungle”, I was actually disappointed that they only got to play eight songs. As I would later find out, the cap of eight songs applied to each other band aside from the headliner. One thing was clear after J’Nai‘s set, they have tons of energy and lots of potential. The band also had some clever marketing ideas with their merchandise ‘booth’, having a backdrop with the words “Boutique J’Nai” and vocalist J’Nai personally signing all CDs that were being bought right after their set. 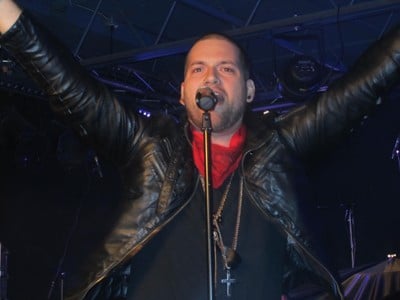 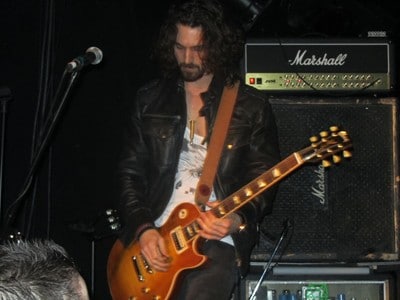 The next band was Last Bullet. I had been wanting to see these guys play live ever since receiving their ‘Last Bullet’ CD EP free of charge after Slash‘s concert about a year ago. With five towering guys on the stage, it seemed that the band members did not have that much room to work with. From the first chords of opening song “Cowboy”, Last Bullet set the mark way up high for the rest of their show and for how down and dirty rock n’ roll should be played. You simply could not help but move around and headbang to the music built around some heavy riffs and lead vocalist Bryan Fontez‘s raspy vocals. The next song was “Jet” from Last Bullet‘s latest CD ‘Love.Lust.Illusion’. Once again, this song is built on some great riffs and highlighted by Fontez‘s vocals. Last Bullet kept the pace up with a few more tunes from their latest CD along with crowd favorite “Girl’s Gone Wild” from their ‘Last Bullet’ EP. What probably characterizes Last Bullet‘s live performance is Fontez‘s stage presence — he commands the audience and looked quite comfortable out there. Certainly, on a track such as “State Of Confusion”, he has to carry the load with the song’s emphasis placed on his vocals. Last Bullet closed out their set with a fantastic version of “Jailhouse Rock”, which had many of the audience members moving and sort of dancing around. Once again, I wanted more but it seemed that every opening band was being limited to eight songs. 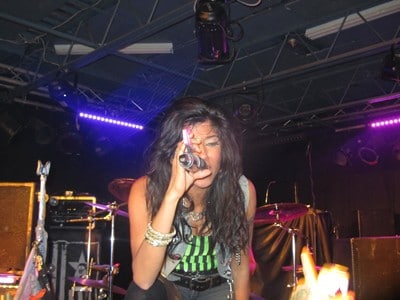 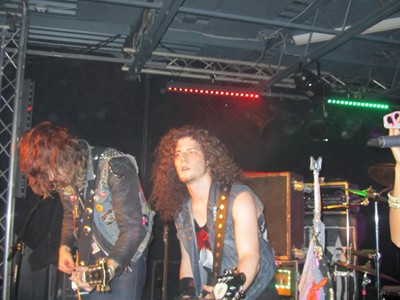 Next up was one of my favorite bands in the last year, Diemonds. As usual, the band kicked into overdrive right from the start playing one fast rocker after another with “Trick Or Treat”, “Loud N’ Nasty” and “Get The Fuck Outta Here” from their stellar ‘The Bad Pack’ CD. Diemonds also treated the audience to two new tunes, which were still upbeat but seemed a little bit more ‘bluesy’ than the songs from their ‘The Bad Pack’ album. Energy and rocking tunes seems to be the key ingredients for Diemonds who kept the pace up throughout their set. I was pleased to hear “Lil’ Miss”, which is not always played at Diemonds‘ shows, and the band closed off their show with the awesome track “Mystery” and a rousing version of Motley Crue‘s “Same Ol’ Situation (S.O.S.)”. What was surprising was Diemonds electing not to play three of their songs that they have videos for — namely “Highway”, “Take On The Night” and “Livin Tonight”. When you have only four songs having videos and three of those songs are not played live, the only conclusion is that Diemonds might be tired of playing those songs. Perhaps, had the band not been limited to eight songs, those tracks would have surfaced in their set. It might sound like a familiar chorus that I am repeating after every band so far but I would have been more than happy to hear more songs from Diemonds that night. 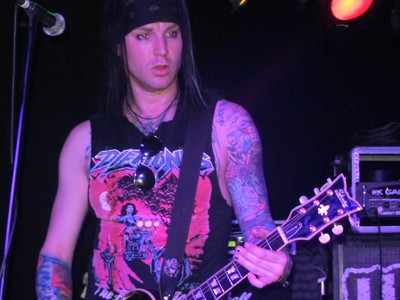 After a very brief interlude, headliner Faster Pussycat took to the stage and was greeted by the biggest crowd on the floor that night. Faster Pussycat must really love playing at the Rockpile in Toronto, given that this was their third show in just over a year at the venue. Given that all of the other bands’ gear had been removed, Faster Pussycat benefited from a bigger and deeper stage to move around. Lead vocalist Taime Downe certainly did not take advantage of this, hardly moving from his center stage position aside from taking two or three steps back to take a drink or smoke what appeared to be an ‘electric’ cigarette — complete with a little blue fluorescent piece at the end. Perhaps not wanting to upstage band veteran and leader Downe, the rest of the band mostly stayed put in whatever position that they started the show at. Apparently not wanting to deviate from what was planned, Downe advised one fan that he hated when songs were being suggested to the band. It did not seem to matter as the crowd lapped up all of the greatest hits set that Faster Pussycat had to offer. All of the hits were there including a number of tracks from their 1987 self-titled debut. Not surprisingly, “Cathouse”, “Don’t Change That Song”, “Bathroom Wall” and “Babylon” seemed to get the best crowd reaction. “Slip Of The Tongue” was probably my favorite from what Faster Pussycat had to offer.

This was another fantastic night of live rock n’ roll and sleaze rock — Toronto rules!