FASTER PUSSYCAT DO NOT DISAPPOINT! 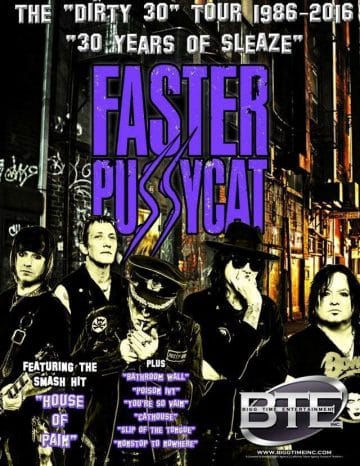 Faster Pussycat are on their ‘Dirty 30’ tour to celebrate 30 years in the business. I have already seen them a couple of times this year (once just a few weeks ago on the Monsters of Rock cruise) so when I saw that they were hitting the Fish Head Cantina in Halethorpe, Maryland…. I got tickets! Hey, Faster Pussycat are one of those bands that guarantees a good time so how can you pass that up? Faster Pussycat are also a photographer’s nightmare. At 9 am one morning on the Monsters of Rock Cruise, I found myself out on the side deck talking with Taime Downe who was smoking and drinking coffee, leaning against the rail looking at the ocean. I said, “I know you like green and red light and you like it low but last night, for half the show, there was absolutely NO light! Did they screw something up?” He replied, “Nah… I told them we didn’t want any lights. Nobody needs to see us.” I was impressed (and then I had him pose for a portrait). Skip ahead about a month later to find me in Baltimore. I wasn’t going to this show to shoot photos or to review it. I was just going to hang out with friends and enjoy the music and the energy but a few songs in I realized…. These guys have some light on them! So I thought “Screw it” and I ran out to the car to grab my camera and shoot a few photos. 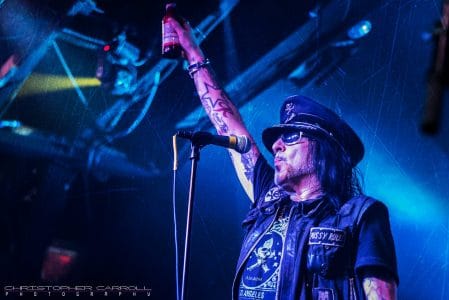 They didn’t waste any time warming up. Faster Pussycat kicked off the show with my favorite song of theirs — “Where There’s A Whip, There’s a Way.” That got everyone’s blood pumping. It was easy to see the crowd was enjoying the show. Everyone was singing and everyone was moving. Thank God for a mic stand because between the constant cigarette in one hand and alternating between a beer bottle and a Jack Daniels bottle in the other, I’m not sure Taime would have made the sacrifice of either in order to hold the microphone. Taime was very comfortable squeezing out his trademark scratchy vocals and the band members were right on with their background vocals. Chad Stewart was solid and didn’t seem to miss a beat behind the drums. Xristian Simon and Ace Von Johnson were like the rooks on a chess board. They didn’t back off for a second. These guys were aggressive in their attack, proudly stomping straight into the songs. They were fun to watch and Danny Nordahl didn’t fall over drunk even once. If he keeps this up much longer, he is going to ruin his reputation and we’ll all start making fun of him. Taime just looked like he was at a party having a good time and we were all invited. They 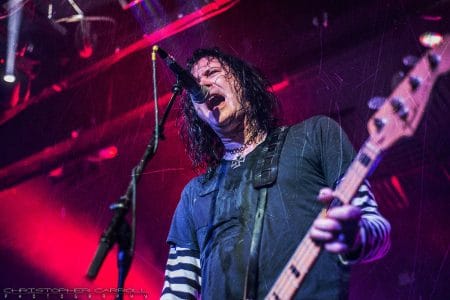 genuinely seem to be enjoying themselves. Taime changed the lyrics up to add a little more humor to a couple of songs. Seriously, these guys were a blast and no one left there without a smile on their face.

As for the songs, they played a great version of AC/DC’s “Sin City” and filled the rest of the set with many of their best. 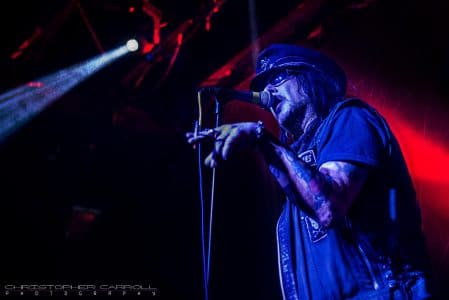 If you’ve never seen Faster Pussycat (or you’ve only seen them twice this year), you MUST! They tour constantly. Check for upcoming shows on their Facebook page,  or on their website. They are also rumoured to be playing M3 this year.