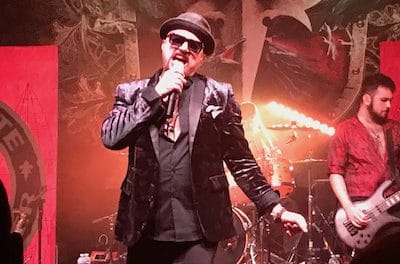 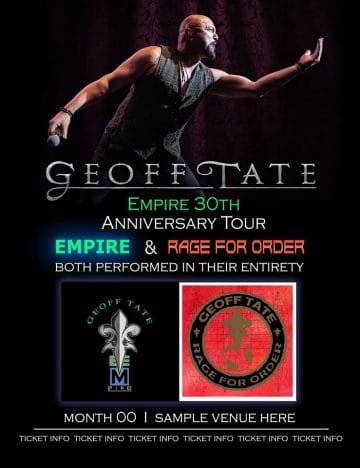 While Queensrÿche continue to forge ahead towards the future with their new material featuring singer Todd La Torre, their former lead vocalist Geoff Tate keeps celebrating their past. At first, it was by playing the entire Operation: Mindcrime album on its 25th year anniversary and I believe that Tate did it again on the 30th year anniversary of the record. Tate recently moved on to celebrating the 30th year anniversary of Queensrÿche‘s best album Empire and along the way decided to celebrate the record Rage For Order at the same time. I would have happily gone to see Tate play the entire Empire album along with a few choice extra songs so having the frontman play both Empire and Rage For Order in their entirety in one show was a special bonus.

That being said, the truth is that I never got into Rage For Order back in the day. In fact, upon purchasing the reissued CD and listening to it in preparation for Tate‘s Buffalo, New York tour stop, I remembered how much I hated songs such as “Gonna Get Close To You.” I wasn’t that keen on the album Operation: Mindcrime back in the day as well and it wasn’t until Empire that I became a fan of the band. Empire must have made a big impression on me because I kept purchasing some of Queensrÿche‘s later albums in the hope that they would even come close to matching Empire’s brilliance. Promised Land in 1994 was quite disappointing. I then took a little hiatus from Queensrÿche before starting to purchase their albums again with Operation: Mindcrime II (2006), Take Cover (2007), American Soldier (2009) and Dedicated To Chaos (2011). Operation: Mindcrime II was pretty good and by that time, I had “discovered” how good the album Operation: Mindcrime was. But from there on, the albums just kept getting worse with Dedicated To Chaos hitting a real low.

The best thing that happened for Queensrÿche, who were definitely on a downhill spiral with their studio albums, was to split from Tate. It’s turned out to be the best thing for me as a fan too because although I only really like one of the three albums that Queensrÿche have released with La Torre at the helm (2015’s Condition Hüman, which finished at #8 on the Sleaze Roxx’s Top Ten Albums of 2015) and although I have found Tate‘s studio offerings with Operation: Mindcrime to be pretty damn awful, Tate‘s penchant to celebrate Queensrÿche‘s greatest studio albums has been nothing less than brilliant. I had the chance to see Tate live in 2013 after he had split from his Queensrÿche bandmates but was still using the band name and performing Operation: Mindcrime in its entirety, and he was brilliant.

I don’t know why this is happening but this would be my third time in my last four concerts that I would be venturing to Buffalo, New York to attend a concert. The obvious drawback in going to Buffalo for me is of course the 1.5 hour minimum drive. I was originally supposed to be joined by a friend for the Tate concert in Buffalo but my friend kind of went awol on me so I assumed that I would be going solo to the show. Despite spending quite a bit of time online researching for information, I did not know whether Tate had an opening act or not so I budgeted 1.5 hours to arrive at the venue at around 7:30 pm. Luckily, the border crossing from Canada to the US was very quick so I did make it to the spectacular Town Ballroom venue at around 7:30 pm as anticipated. I had previously raved about the venue when I saw the Spiders perform there way back in February 2016 so I won’t repeat myself except to say that there is no bad spot to view the stage inside that venue. 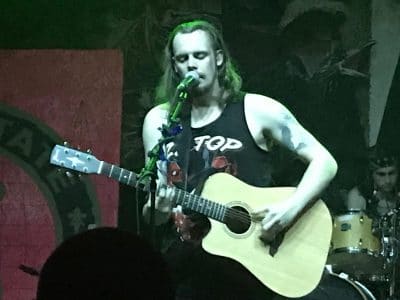 I was pleased to see that there was an opening act, which I later found out was Irishman Mark Daly. The singer / guitarist was backed by guitarist James Brown, bassist Jack Ross and drummer Michael Fechter. Daly mainly played rather laid back acoustic type songs. The venue was already pretty packed by the time that I got there and Daly told the crowd how he appreciated them listening and cheering him on when they likely had never heard of him. I can’t say that I was really into him Daly‘s tunes but the one track that he had written about his son was quite poignant and the highlight of his set.

I was excited to see Tate perform because not only does he still have his amazing vocal pipes, he is also entertaining when he is speaking to the audience. I actually think that he’s a great public speaker as he always seems to exhibit just the right pauses while addressing the crowd. He just seems really comfortable out there and it’s fun to see. As someone who is called on to do some public speaking from time to time, and who even joined a Toastmasters group almost a quarter of a century ago (I only attended 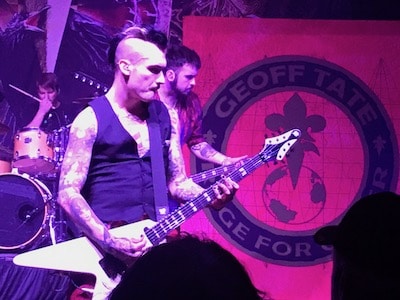 a couple of times with one of my roommates Steve), I actually really enjoy seeing someone who excels at public speaking. Tate qualifies in my mind as a great public speaker. I’ve only seen him address the crowd in a live setting a couple of times but his story telling at the Brass Monkey in Ottawa, Ontario, Canada a couple of years ago and again on this night were second to none.

As much as I was looking forward to see Tate perform live, I wasn’t really keen on hearing the Rage For Order album in its entirety. Having never gotten into the album back in the day despite having a copy of it when it first came out, I purchased the CD a couple of months in advance of Tate‘s Buffalo tour stop to re-familiarize myself with the album and hope that it would grow on me before the show. Over the years and as I got more into Queensrÿche, I apparently started hearing more Rage For Order material because I was surprisingly familiar with quite a few songs when I re-listened to the album during the last few weeks leading to the show.

Nevertheless, I simply didn’t listen to — or more like I did not want to listen to — Rage For Order enough times to really absorb the songs and know them inside out prior to Tate‘s Buffalo tour stop. Even though others in the audience were thoroughly into the Rage For Order material, I was simply not one of them. In fact, halfway through the album, I was secretly hoping that Tate‘s set would speed up or that he would even omit playing a few of the last songs off Rage For Order so that we could get to 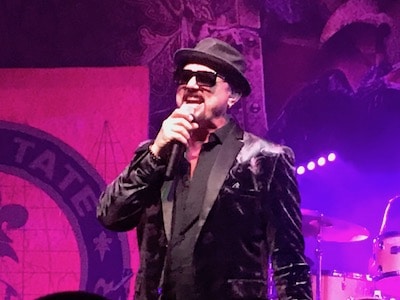 Queensrÿche‘s masterpiece — Empire. I did enjoy the faster paced songs off Rage For Order such as “Walk In The Shadows” and “Surgical Strike.” For the latter, Tate noted that Queensrÿche were ahead of their time but now the lyrics seemed a bit dated as they were about… GPS tracking.

Tate then announced that there would be a 10-minute or so intermission. While I have always enjoyed standing in general admission areas for concerts, I’ve got to say that this time, I was really feeling it with my body and particularly my legs stiffening up halfway into the Rage For Order set and while waiting for Tate‘s stage set to switch from the Rage For Order to Empire side back drops. It sucks getting old. I didn’t want to leave my spot on the general admission floor given that I was in about the fourth row of people from the stage and didn’t know anyone that would hold my space for me if I went out to stretch my legs a little bit. In fact, I was wondering how I would last for the duration of Tate‘s set but as soon as the music from Empire was underway, I totally forgot about any stiffness that my body was experiencing and I was just immersed in the songs. So much so that I became one of those concert goers that you might want to avoid. But I’ll get back to that.

Hearing Rage For Order and Empire back to back in a live setting quickly showed me the evolution that Queensrÿche undertook during that time period. Empire was much more radio friendly with the songs full of melodies and centered around Tate‘s great 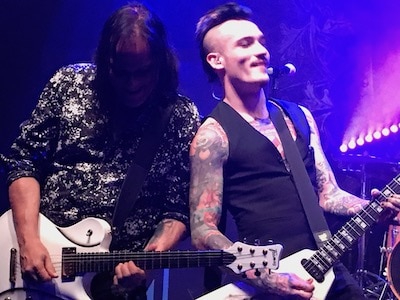 singing. There really hasn’t been another Queensrÿche album quite like it. Empire has always started off strong with the song “Best I Can” so it’s no surprise that Tate had the crowd going right away with the opening track for his second half of his show. It was fun hearing “The Thin Line” in a live setting. Although the song is a little on the slow side, it’s got great melodies and showcases Tate‘s singing. Not surprisingly, there was a lot of singing along to “Jet City Woman” and you could see Tate and his band absorbing the energy from the crowd. By the time that Tate got to “Another Rainy Night (Without You)”, I had become that dreaded concert goer — the one that is in back of you singing (poorly) at the top of his lungs. There were a couple of ladies in front of me and one of them kept looking back at me with a big smile, especially during “Another Rainy Night (Without You).” By the time that the title track had been played, those ladies were long gone. I can only conclude that my “singing” scared them away. Then again, with such poignant lyrics such as “Now he’s out on the street all day / Selling crack to the people who pay. / Got an AK-47 for his best friend / Business the American way.”, how can you not be singing at the top of your lungs?

My one knock about Empire is that the album does finish off a little slowly with “Hand On Heart”, “One And Only” and “Anybody Listening?” although I really like that last song. Given that I had checked the setlist prior to attending the show to make sure that the Empire set was played after the Rage For Order one (which would have influenced when I departed from Toronto to Buffalo), 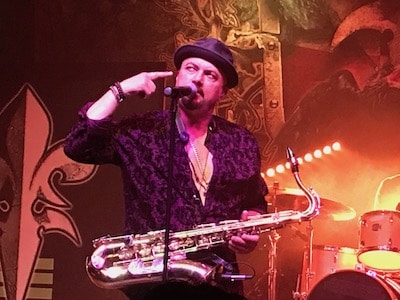 I knew that Tate would be playing the song “Last Time In Paris” as the encore. Having bought the 2003 CD reissue of Empire, even though I already had Empire on CD, I had always thought that the extra bonus track “Last Time In Paris” should have been included on the original Empire album so it was a real treat to hear it in a live setting. What I wasn’t expecting was for Tate to play a second encore with “Eyes of A Stranger.” What a treat! And what a feat for the 60 year old Tate who delivered about two hours of music to the Buffalo faithful. Tate made sure to point out how great that the audience was and I got to say, there was a great atmosphere in a magnificent venue.

At the end of the day, I am glad that Tate and Queensrÿche parted ways as that combination was spinning its wheels in its last decade together, Queensrÿche have been rejuvenated with La Torre‘s arrival (even though I only like one of their three albums with La Torre) and Tate is simply stupendous live when he is revisiting the older Queensrÿche albums. Although it would have likely more fun having my friend attend the concert with me, it actually worked out just fine since I had to stop off at my work office for about 45 minutes on my way home, which is something that I 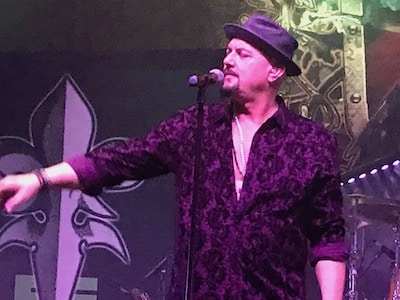 couldn’t have done had my friend been accompanying me. 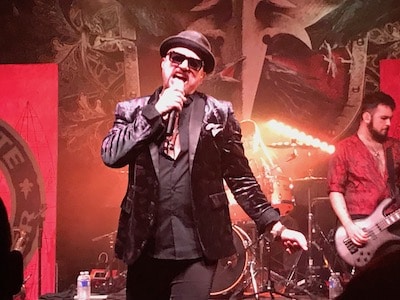 Geoff Tate performing “Another Rainy Night (Without You)” live at the Town Ballroom in Buffalo, New York, USA on February 23, 2020: