IF ROCK IS DEAD, THEN THE AFTERLIFE LOOKS PRETTY GOOD 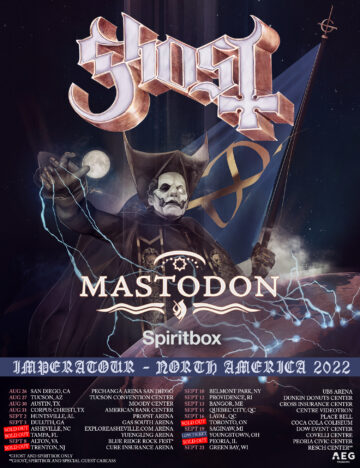 The last ticketed live show we went to was in April of 2019 (two and a half years ago), so we’ve definitely suffered from a lack of live music. I worked the day of this show, so we didn’t have much time to get to the venue. Usually, we catch concerts at either Amalie Arena in Tampa or Amway Center in Orlando. All three are used primarily for sporting events, but Yuengling doesn’t feel as new and there didn’t seem to be as much to do right around the arena. However, parking was free and Yuengling is considerably smaller than Amalie and Amway (10,411 seats — maybe several thousand less since I couldn’t find precise numbers for end stage concerts—compared to Amalie’s 21,500 and Amway’s 16,486). The quality of sound in all three venues is comparable.

Marilyn offered to get me a shirt from the merchandise stand. I knew Spiritbox might not have anything and any Ghost shirt would be a little more devil-y than what I usually wear, so I figured Mastodon would be my best shot. The one short-sleeved tour shirt the Mastodon stand offered featured a huge red devil on the front that looked like something out of Dante’s Inferno or a Hieronymous Bosch painting. We live in a small town and wearing clothing like that invites stoning or at least non-preferential seating in restaurants. I passed and she said we’d get something off of Mastodon’s website later. Just give me the cover art for Hushed and Grim and a list of tour dates on the back. Later, when I stretched my legs during a break, I found a small merchandise stand with nothing but Ghost gym bags, banners, posters, and lanyards, but not shirts. Somewhere, someone came back from the show loaded with Ghost merchandise, but not a single shirt because they never found the other merch stands.

We made our way to our seats right about the time Spiritbox took the stage, so we caught all of their set, minus about the first minute.

When we saw down, the arena was half-full, which is pretty good attendance for the start of an opening act. Their 30-minute set consisted of four songs from Eternal Blue and two other songs after that. Spiritbox played the two songs I most wanted to hear them play — “Yellowjacket” and “Holy Roller” from Eternal Blue — and both sounded killer live. They didn’t have much of the 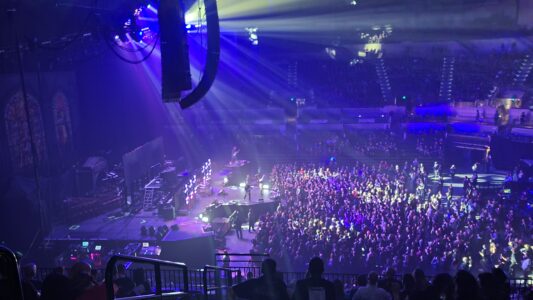 stage to work with as Mastodon’s gear was already set up behind them, and Ghost had at least half the stage filled with their stuff. With limited time and space, Spiritbox made the most of their resources and put on a great set.

Spiritbox performing “Circle With Me” live in Tampa, Florida, USA on September 6, 2022:

There was very little time between acts, as setup consisted mostly of moving Spiritbox’s gear out of the way. Augmented with various psychedelic visuals flashing around and a keyboard player, Mastodon gave a tight performance heavy on riffs, grooves, and emotion. Sounding like some complex blend of pre-Black Metallica, Led Zeppelin, and Kyuss, Mastodon played an hour. Five songs came from current album Hushed and Grim, two were off of Blood Mountain, and the rest sampled various other records. Having last toured on Emperor of Sand, Mastodon are giving that material a break. Bassist and singer Troy Sander was front and center, which makes sense as he supplies so many of the lead vocals and — on this night, at least — was the most kinetic member. “More Than I Could Chew” is the song we most wanted to see played, and it did not disappoint. 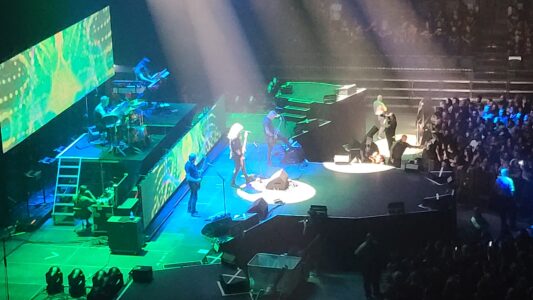 Mastodon delivered an epic rendition. I’d love to hear these guys headlining their own tour.

The break between bands was longer as the crew worked to clear Mastodon’s instruments and then build up and set up the stage for Ghost’s part of the show. A white sheet hung from the rafters and concealed the front of the stage. Ghost started playing behind the sheet a few moments before the sheet fell. By this time, almost everyone had found their seats with a few last- 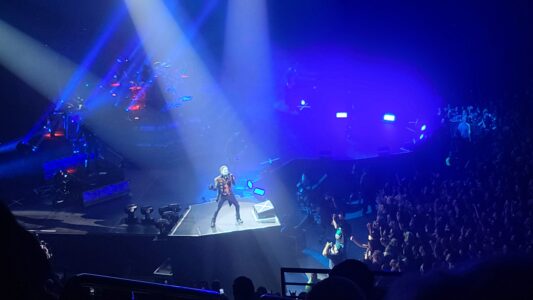 minute stragglers spilling beer and juggling snacks as they rushed in to the arena. This show was not listed as completely sold out, but I couldn’t didn’t see any open seats left. After a couple of songs, Tobias Forge talked to the crowd and said he hoped the last few years “have not been too shit for you.” That has since become a catchphrase in our household.

Ghost gave a theatrical performance with full stage production — props, lasers, explosions, confetti mixed with Ghost’s own currency called Papa Bucks or Mummy Dust Dollars (I wonder what hellish realm accepts those and what you can buy with them.  Souls?  Supernatural favors?  Strange beasts?). The backdrop consisted of an image of versions of Forge’s Papa Emeritus persona set against stained glass. Placed ahead of that was a reproduction of a city resembling the Vatican. In front of the mini-Vatican were identical Nameless Ghouls (around eight at any given time) playing various instruments. A few raised industrial platforms served as mini-stages for the Ghouls. This band is tight as it has to be when nine people are playing music, singing, and running around at the same time.  The Ghouls wore a steampunk sort of helmet with large eye ports that gives them an insectoid appearance and dressed in black, formal Victorian clothing like shock troops from the shadows.

Ghost played around two hours and drew two-thirds of their set from their last three studio albums — Prequelle, Meliora, and Impera. Those are my three favorite Ghost records, so I was pleased. Forge would perform a few songs, disappear backstage as the Ghouls entertained us by, for example, putting on guitar duels, and then Forge would emerge as a different Papa character, a mixture of the Pope and Day of the Dead face paint and imagery that also draws from Alice Cooper, KISS, King Diamond, and Marilyn Manson. There were numerous highlights. “Rats” was absolutely shredding. Before “Cirice,” one of the ghouls riffed the opening chords of “Zombie Ritual” by Death, a pioneering death metal band from Florida.  While “Miasma” played, a deceased version of Papa Emeritus Nihil wearing sunglasses was wheeled out in a vertical glass box. A stagehand shocks him to life with a defibrillator. Nihil strangles the stagehand, straps on a saxophone, and begins wailing away on the sax. During “Mummy Dust,” a ghoulette jams out on the keytar.

Ghost performing “Whatcher In The Sky” live in Tampa, Florida, USA on September 6, 2022:

Rather than play the game of going backstage, making the crowd chant and wait, and then returning for an encore, Forge talked for a bit, thanked everyone, and then Ghost went into a couple of more songs. After “Dance Macabre,” Forge said, “If we play 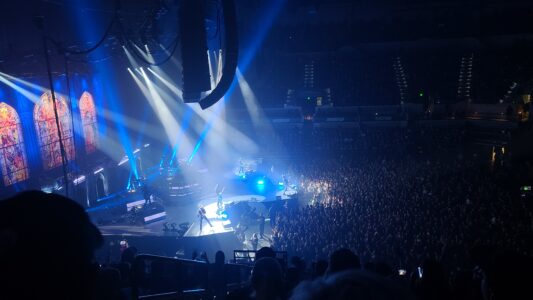 one more song, I need you to promise me that as soon as we’re done, you’ll get the fuck out of here, but that you’re nice to each other. You take care of each other. You help one another… Do we have a deal?” With that understanding in place, Ghost launched into “Square Hammer,” the final song of the night. 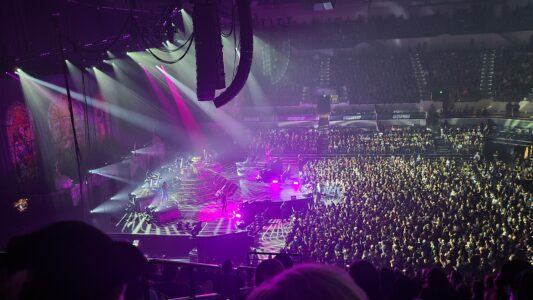 Ghost restores us to a time when rock was edgy, dangerous, and you ran a real risk listening to it, when, for example, being into Ozzy Osbourne pre-No More Tears meant you were going to hell. It’s easy to imagine someone attending their first rock show, seeing Ghost perform, and that experience being a defining moment when they realize they are into this for life. I want to be that. I am that. Metal is not a phase. It’s not a moment. It’s an identity and a lifestyle.

Gene Simmons has said repeatedly that rock is dead. I say Gene Simmons is out of touch. Rock may be dead in the sense that album sales no longer account for the majority of artist revenue and record label support is not what it once was. Yes, the entire music business had to reconfigure itself around touring income and merchandise sales, but change is not the same as death. Tonight’s concert demonstrates that rock is alive and well. Old gods take new forms and live on. We’re still making the myths. When things “get too shit for you,” the music will be there. 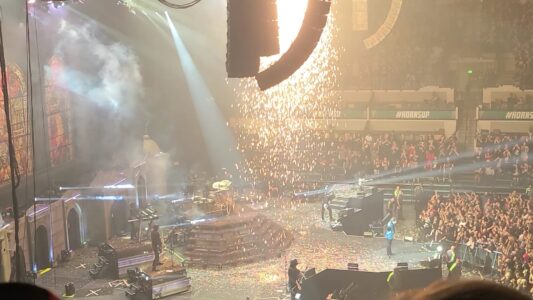