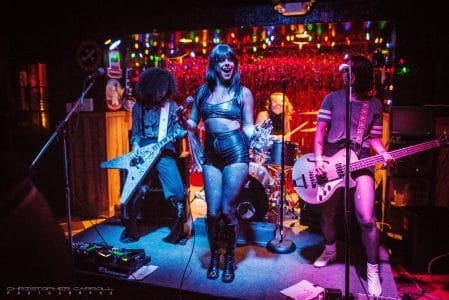 The threat of a recent hurricane forced Adam Ant to cancel a few shows in Florida. To an opening band on the opposite side of the country from their home, this would normally mean a few unscheduled days off but not for the Glam Skanks. They packed up the van and hit the East Coast to play some surprise shows on short notice. One of them was in a small club in Washington, D.C. called Slash Run.

Having seen them before on a big stage, when I got word, I couldn’t pass up the opportunity to run down and check out how they would handle a small venue. I’ve had the pleasure of shooting photos of these girls in fabulous light while they were opening for Adam Ant. Tonight, I wasn’t even sure that this club had lights at all. 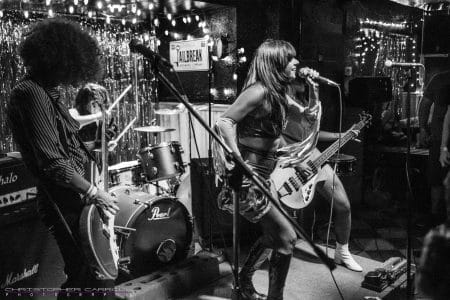 Upon arriving, I noticed a very small stage slightly larger than a mattress but that didn’t slow these ladies down one bit. They saw no barriers. The ladies considered the entire venue their stage. With Ali‘s super sexy ‘go-go’ style dancing, Millie’s solid and consistent playing, Cassie’s hair flipping while drum pounding and Veronica‘s expressive guitar playing, it’s easy to forget how young these girls are. They’re so good at being on stage! While hanging around talking to them, the playful little expressions, the soft little voices and tiny little hands remind you that they’re just cute little girls…. but girls who are very good at what they do!

And what they do is sell you a song. The cuteness, the attitude, the excitement — it’s all part of the delivery and it works perfectly. 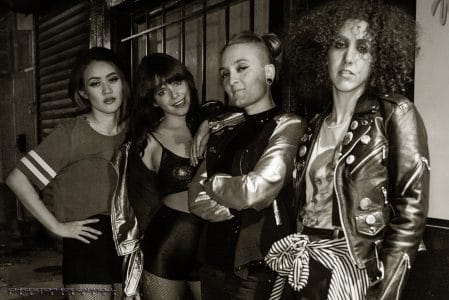 Ali marched confidently through the crowd, singing and sliding her arm around people as she moved through them. I looked over to see Veronica on top of a pedestal table that definitely wasn’t made to balance a guitarist but she didn’t think twice about being on it or jumping off! At one point, Ali was even crawling through the audience. You can tell their excitement is real.

These girls are playful and they make sure they have a good time on stage. You can tell their excitement is genuine. Before the show, I asked the singer Ali how she felt about playing a small club with such a little stage. She said, “We’ve played smaller! Are you kidding? We’ve played a laundromat! We’ll play anywhere. We love it!”

In addition to some incredibly catchy songs, these girls have a charisma that can’t be missed. They wore genuine smiles, had authentic enthusiasm and played with energy worthy of a big stage. If you ever have the opportunity to see them, don’t pass it up! These ladies will certainly draw you into their joy.

I can officially say I got glittered at a Glam Skank show, what a blast. These ladies are just awesome!!! They closed the set with another new aong