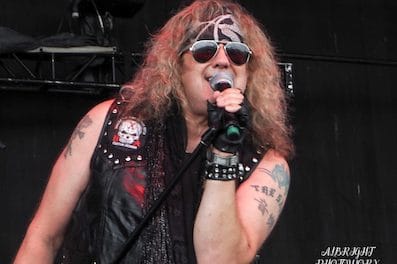 ROCKTEMBER FORGES AHEAD WITH SEVENTH EDITION

My wife and I have been attending Grand RockTember at Grand Casino in Hinckley, Minnesota for the past four years.  Since it takes place in September, we treat it as our wedding anniversary present to each other. After last year’s concert, it was announced that it was being cancelled due to poor ticket sales, which was brought on by the casino’s poor planning, price hikes and broken promises. Earlier this year, a message appeared on a Facebook RockTember fan page stating the festival might still be on and speculation began with posts of what bands everyone would like to see and will the mistakes be corrected. A month or so went by when Quiet Riot leaked that they would be playing in Hinckley in September and the rumors started turning into reality as the casino finally announced the dates and our annual anniversary trip was on again.

Fast forward to September — my wife and I headed up a day early to get our camp site ready and get settled in for the weekend. After setting up, we grilled some burgers before heading to the casino with the hope of running into some band members like we did the year before. Last year, we had drinks and conversations with Eric Martin of Mr. Big and his backing band, as well as Steve Brown and P.J. Farley of Trixter. We also ran into members of Vain as well as Rob Hammersmith and Rachel Bolan of Skid Row, but this night was a failed venture. We then played a few slots and went to watch a local cover band that was warming the fans up for the weekend with covers of ’80s rock tunes. 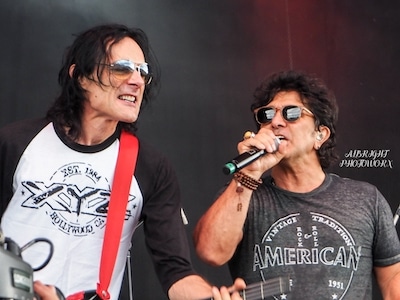 XYZ kicked off the day with plenty of energy and sounded great as they ripped through a short opening set. It was nice to see Terry Ilous back where he belongs singing “Face Down In The Gutter”, “What Keeps Me Loving You” along with their biggest hit, “Inside Out.” I really wished they would have had more time because I was really enjoying my first time seeing them.

XYZ performing “Inside Out” at Grand RockTember Festival in Hinckley, Minnesota, USA on September 20, 2019:

ThundHerStruck, an all female AC/DC tribute band, was up next. Dana Shirasaki, aka “Bon Johnson“, strutted around the stage, while guitarist Tina Wood, dressed in a school girl outfit, had Angus Young‘s moves down to a tee. They did a fine job cranking out favorites from all the band’s albums and the crowd really got into them. 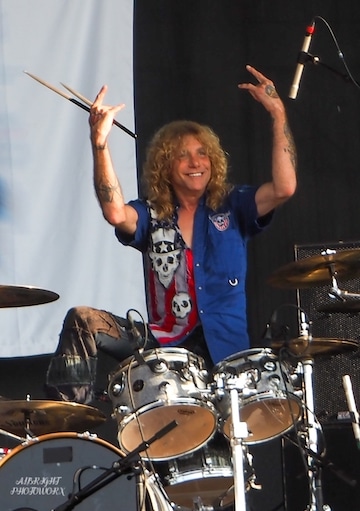 Steven Adler of Guns ‘N’ Roses was the “band” I was most curious to hear. Once Steven took a seat behind the kit, a smile came across his face and stayed there throughout the set. His band was comprised of guitarists, Michael Thomas and Alistair James, Tanya O’Callaghan on bass and singer Ariel Kamin. His vocals would give Axl Rose a run for his money and the band handled all the Guns N’ Roses favorites with ease. “Mr. Brownstone”, “Anything Goes” and “You Could Be Mine” were my favorites from their 11 song set.

Slaughter made their third appearance and as usual they got the crowd singing along. It was nice to see Blas Elias back behind the drums. Zoltan Chaney was always entertaining to watch, but Blas did a better job keeping the songs tight and together. 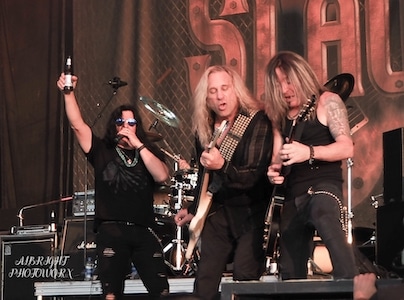 Mark Slaughter made his way through the crowd letting fans help him sing “Spend My Life.” Their setlist was bookended by “The Wild Life”, “Burnin’ Bridges”, “Fly To The Angels” and the 1990 party anthem, “Up All Night.”

Night Ranger returned for their second time and kept the crowd going with hits, deep cuts and Damn Yankees tunes too.  Jack Blades, Brad Gillis, Kelly Keagy, Keri Kelli and Eric Levy never disappoint and had the crowd eating out of the palms of their hands. I was glad to hear lesser known songs like “Rumours In The Air” from Midnight Madness and “Night Ranger” from Dawn Patrol mixed in with “Sister Christian” and “(You Can Still) Rock In America.” It’s always nice to hear bands mix up their setlists from time to time. 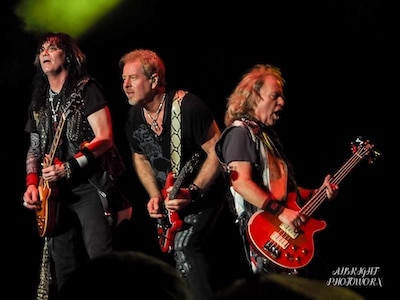 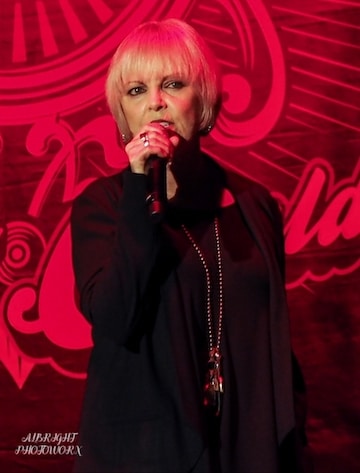 Pat Benatar closed out the night and I thought she would be out of place, but she proved me wrong. Pat and husband/guitarist Neil Giraldo showed they can rock with the best of ’em with “All Fired Up.” Pat‘s voice did not falter and her falsetto during “We Live For Love” was most impressive. “Promises In The Dark” and “Hell Is For Children” were highlights for me and the fans loved “Hit Me With Your Best Shot” along with the closer “Love Is A Battlefield.”

Pat Benatar performing “All Fired Up” at Grand RockTember Festival in Hinckley, Minnesota, USA on September 20, 2019:

PAT BENATAR – All Fired Up

I’d like to start by saying that a tried to get a press pass for the weekend, but was denied; so for day two, I only watched three of the seven bands playing that day. I spent the rest of the day in the parking lot tailgating and visiting with family and friends I had met the past four years. The venue is an outdoor amphitheater, so you can hear every band ‘Loud and Clear’!  Yes… Autograph were there.

I have been waiting since 1985 to see Black ‘N Blue. They were supposed to open for Mötley Crüe in Duluth, Minnesota on the Theatre of Pain Tour, but had to back out and were replaced by Autograph. We made our way up front and I told my wife I would watch part of the set then we could go check out the merch booth to see the stuff for the new day. Well… that didn’t happen.  I was blown away! Even though I have never seen them before, they sounded better than I could ever imagine. Jamie St. James sounds like he does on the albums. I may be exaggerating a little, but he was damn good. He was joined by original member Patrick Young on bass, Jimmy D’Anda filling in on drums and Bobby Capka and Brandon Cook — two great guitarists 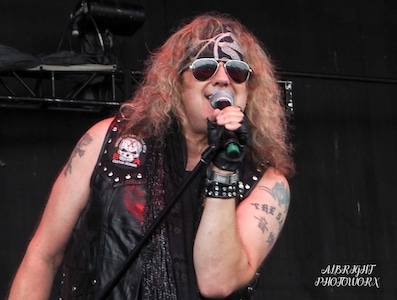 that traded off solos and provided backing vocals. The whole set was a highlight for me, but if I had to pick a few, they would be “Does She Or Doesn’t She”, “Nasty Nasty”, “Wicked Bitch”, “Autoblast” and the other five songs they played!

At this time, we headed to the parking lot. Chris Hawkey was next up. He is a co-host from a morning show on KFAN which is a sports radio station from Minneapolis, Minnesota.His band plays a couple songs from his former band and they also played rock hits from the ’70s though the 2000s. I saw him there last year and they were very entertaining.

Up next were Autograph and Vixen. Both bands have played here before, so they provided a great background soundtrack while we drank and got caught up with the lives of our concert going friends.

We made it back into the venue half way through Quiet Riot‘s set. Jizzy Pearl was commanding the stage as he belted out the vocals with a rough, aggressive style, which I prefer over former singer James Durbin. Once again Frankie Banali was AWOL, but long-time members Chuck Wright and Alex Grossi had no problems keeping things together.

Queensrÿche hit the stage for their fourth year in a row. They were a late replacement for Dee Snider, who I was looking forward to seeing again. I’m not going to complain about seeing his replacement as they are my favorite band. We made our way up front as close as we could when a friend of ours gratuitously gave up their spot on the rail so my wife and I could be right up 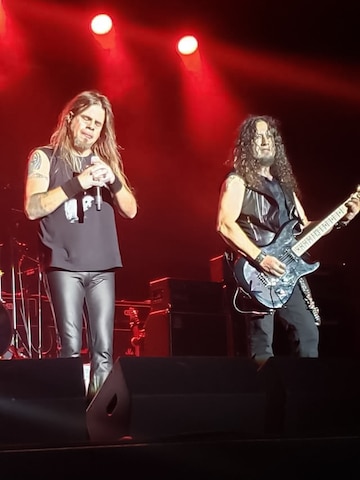 front.  “Blood of The Levant” blasted through the amps and made sure the fans were still awake.  The setlist had been switched up since we last saw them in March which gave the show a fresh feel. “Jet City Woman” found Eddie “Ed Bass” Jackson standing in front of me and my wife as he strummed the opening bass line with a pick that he tossed to my wife, which made her night a lot brighter. As with Black ‘N Blue, their whole set was a highlight for me.

We made our way back out of the venue before headliner Vince Neil hit the stage. Been there, done that. He really needs to start putting in an effort to make me a fan again. I love Mötley Crüe, but his setlist has remained pretty much unchanged for the last 10-15 years. Once in the casino, we grabbed some drinks, mingled with more friends and the night was capped off by running into Brandon Cook from Black ‘N Blue and Parker Lundgren and Casey Grillo of Queensrÿche.

I hope that this event continues, but they need to start making it fresh. There are too many returning acts and the majority of the fans are getting frustrated. Bands like Dangerous Toys, Tora Tora, Kingdom Come, Danger Danger and Whitesnake are just a few bands to never play here. Start adding some of these and you will have no problem selling tickets and making this event successful once again!