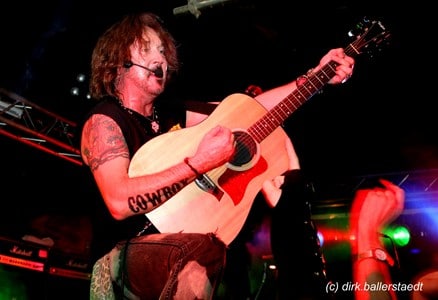 After a six hour ride on a fast moving train I arrived at noon in the wonderful city of Ludwigsburg in Southern Germany. I then headed to one of Germany’s finest rock clubs, named Rock Fabrik (which means Rock Factory and is run by well-known promoter Eddy Freiberger), for the annual H.E.A.T. Festival.

At 2:50 PM the festival kicked off with German glam band Hollywood Burnouts who did a good job and won the Oscar for having the biggest hair (that ’80s glam/sleaze style) of the festival. Musically the band had a lot in common with CrashDiet‘s debut album, and even though being the opening act is always a tough job (especially playing at a time when your grandparents are having coffee and cake), I enjoyed the four piece. 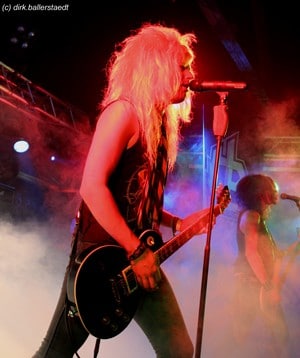 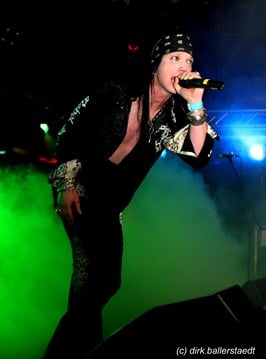 Then came Serpentine, a melodic band from the UK, who did a bit better with their set by playing ’80s inspired AOR-metal. Slowly people were beginning to move toward the stage while raising their fists.

I was even more impressed with Melbourne, Australia’s arena/melodic rock band White Widdow who won me over with such strong songs as “Cross To Bare”, “Shoukai/Tokyo Rain” and “We’ve Got The Wings” and the great performance by frontman Jules Millis. White Widdow adopted an ’80s classic AOR sound like that of White Sister, Treat, Survivor, Journey and Europe — you just knew what genre these musicians belonged to. And the day after the show I had two of their catchy tunes stuck in my head, “Don’t Fail Me Now” and “Broken Hearts Won’t Last Forever” (the latter being the band’s first single/video), and damn… that classic ’80s AOR sound which was popular between 1983 and 1987 never goes out of fashion. White Widdow were, for me, the first highlight of the H.E.A.T. Festival and hopefully we hear some more good songs from these guys in the next few years.

Up next was another German band, Human Zoo, who brought with them a slightly harder edge with the melodic rock they perform. But what was really interesting about Human Zoo is that they featured a saxophone player who brought a special flair to the songs. It reminded me of the old stuff by a band named Charlie (who had some minor success with “It’s Inevitable” and “Tempted” from their great 1983 album ‘Charlie’), but Human Zoo has a harder edge and right after the intro to “Amy & Allison’s Memories/The Answer” they rocked the club with the best songs from their killer albums ‘Over The Horizon’ and the recently released ‘Eyes Of The Stranger’. The German and Swiss fans in attendance (Switzerland is not too far away from Ludwigsburg) went nuts for the first time this evening, and for Human Zoo it was like a homecoming show. 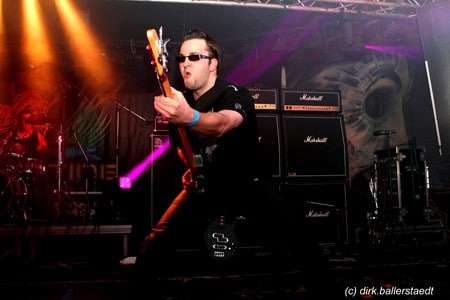 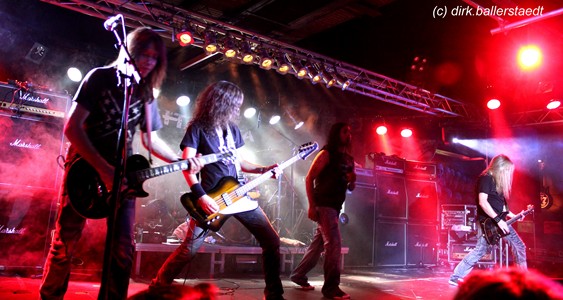 Switzerland’s Shakra then took the stage and got a pretty good response with their melodic metal mixed with a heavier attitude. Shakra knows how to play melodic songs as heavy as possible without losing the melodic harmonies — it was an awesome mixture, something like Metallica‘s heaviness paired with catchy hooks and strong melodies. So Shakra was a big surprise to me, and from this show on I will have the Swiss rockers in my sights. Even with their new singer John Prakesh, the third frontman in the band’s history, the group put on a great performance with songs from such ass-kicking albums as ‘Everest’ and their latest release ‘Back On Track’ that you could easily bang your head to.

While Shakra played on the action began at the merchandise table as the headliners Keel, and then the Stage Dolls, started their signing sessions where many fans got photographed with their idols — and it was good to see the ’80s rockers all looking healthy. 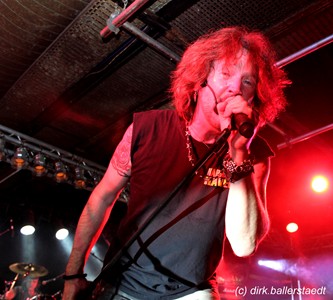 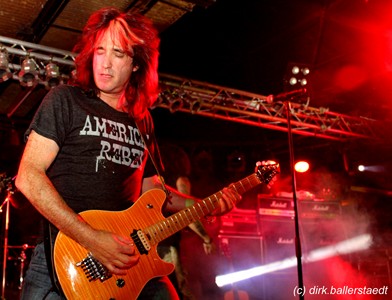 With the club packed, one of the bigger hair-metal bands of the ’80s came out after a slight delay and rocked the stage with the opener “Come Hell Or High Water” from the band’s newest CD. Keel were heartily welcomed back by the German fans as singer Ron Keel took a ride with the “Speed Demon”, and the opening songs demonstrated that Keel was the main reason why people shown up at this festival. And believe me, ‘Keel 2011′ is not so far removed from the band I saw in Phoenix back in 1987 when they were the support act on Motley Crue‘s ‘Girls, Girls, Girls’ tour — that was an awesome set Keel played in their hometown arena back then, The Veterans Memorial Coliseum, at a time when all rock bands looked larger-than-life on huge arena stages. Keel have recorded four great albums over their career, beginning with their Michael Wagener produced debut album from 1987 — but we all know that the ‘Metal Cemetery Assoc.’, better known as MCA Records, didn’t properly push that record and meant that Keel never got the success they deserved. 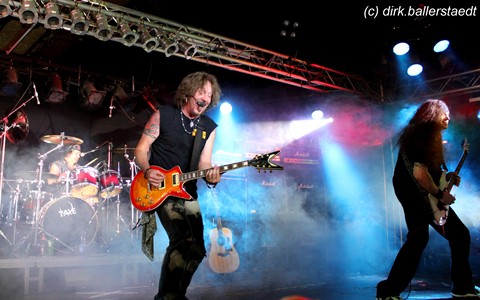 But to see Ron Keel, Marc Ferrari, Bryan Jay, Dwain Miller, and ‘newbie’ Geno Arce back on the streets again promoting their 2010 comeback album ‘Streets Of Rock & Roll’ brought tears of joy and boosted fists raised on rock. Ron Keel is a hell of a professional entertainer (even if he does country music once in awhile, he’s been a rocker since his days in Steeler) — an artist that holds his fans close to his heart. It was unbelievable how crazy the Keel fans went when the songs “Somebody’s Waiting”, “Here Today, Gone Tomorrow”, “Push And Pull”, “The Right To Rock”, “Because The Night”, “Tears Of Fire”, and “Looking For A Good Time” were played. During the encores “United Nations” and “You’re The Victim (I’m The Crime)” the band tore down the walls! What a return… what a show… it was one of those special events that you just shouldn’t have missed! 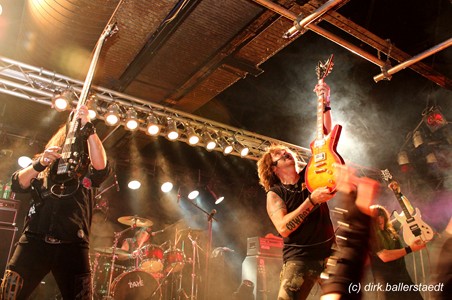 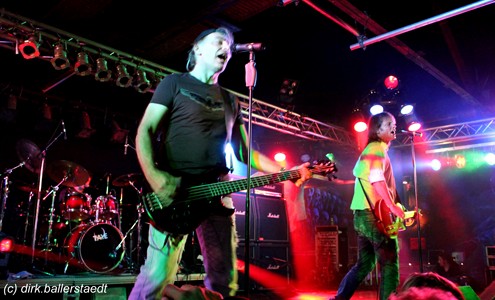 After six bands, and with the clock striking shortly after 10:00 PM, the headliner Stage Dolls — from Trondheim, Norway — came on. Some people in attendance went home because it was getting late, and with the festival being held on a Sunday evening it meant many people had to get ready for work in the morning. But the fans that left early missed an outstanding show as the three Scandinavian rockers, plus a keyboard player, started with their show with “Always”, a perfect opener from their latest album. Then came “Love Cries”, a classic from the band’s 1988 self-titled album and one of my all-time favorite songs from the hair metal/AOR era, and the storm broke loose as the audience sang along. A few minutes later frontman Torstein Flakne was deeply moved as he sang “Hard To Say Goodbye” and the fans replied with the verses. That is what rock music should be all about — down-to-earth music being played to down-to-earth people. And if you listen to Stage Dolls‘ music, listen to songs like “Wings Of Steel”, “Still In Love”, “Get A Life”, “Soldier’s Gun”, “Love Don’t Bother Me” and countless others and you’ll understand why I like the band so much. It makes it even more special when you realize Stage Dolls are only a 3-piece, including bassist Terje Storli and drummer Morten Skogstad, that have created their own original sound with three or four killer tracks on each of their albums. 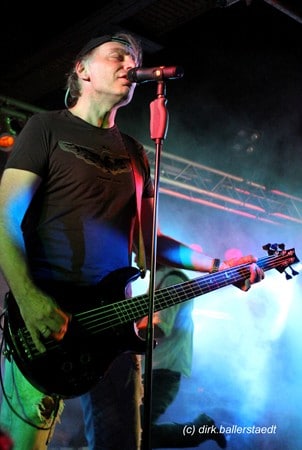 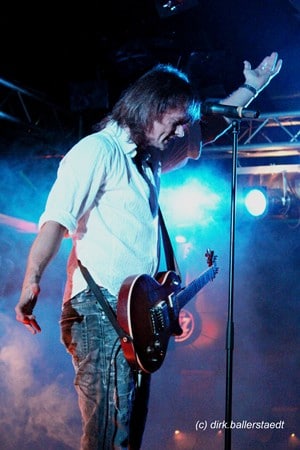 Speaking of the festival, it was my first time there and I could tell that the club was packed with kind people (no drunken idiots or rioters) and there was a good mixture of bands with the two headliners, Keel and Stage Dolls, showing the younger bands how men play rock ‘n’ roll. But to be fair I have to say that the biggest surprises were Shakra, Human Zoo and White Widdow. These bands showed that the future of melodic hard rock is bright, and when the old men are gone these ‘boys’ will rock on. See you all next year! 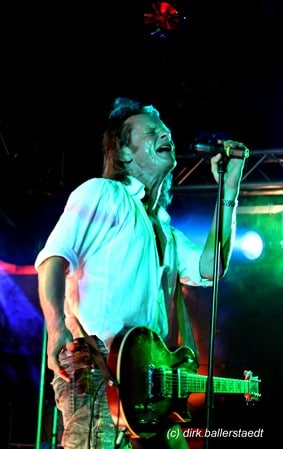 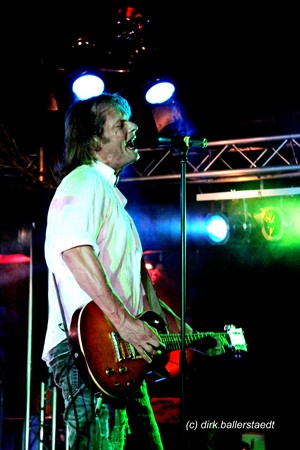