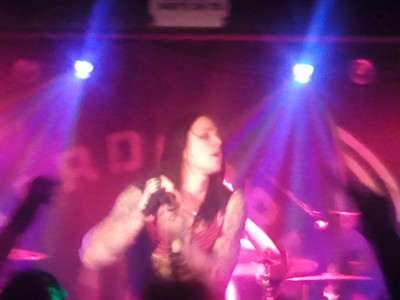 Well, here I was taking my friend Claire to her first real sleaze gig…Hardcore Superstar. She had been on a massive listening mission over the previous few weeks to get acquainted with the band’s material. Of course prior to this she listened to all the wrong kind of stuff, before discovering Big Cock… steady there, I mean the band of course!

Anyhow, upstairs into King Tuts I go and grab myself a quick beer before taking a look at what time the band played. To my great delight Bullet, the number 1 rated band in Sleaze Roxx’s Top 10 of 2008, were the openers!

Over to the t-shirt stand I go to grab my Hardcore Superstar attire. I put on my new shirt and get all sorted. We end up getting a nice spot in front of the stage so we can see through the groups of women hanging around… and out, if you know what I mean.

Up first was a local Glasgow band called Black Heart Fire, and the sound was what you would expect from a support band just starting out. They got the crowd going nicely, and stuck a couple of really good numbers in their set (check out one of them, “Night On The Town”, on their MySpace page). They ended up doing about six songs before making their exit and setting the stage for an incredible night of sleaze rock. 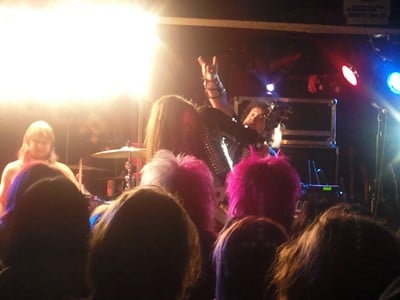 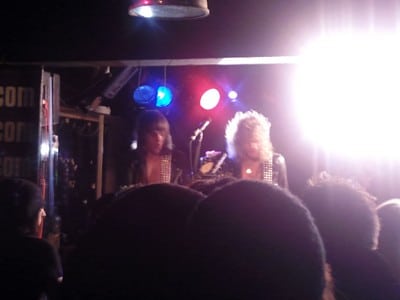 Bullet had their ‘set’ all ready to go and it looked like the makeup stand from a cheap hooker’s bedroom. The band’s name was spelled out with light bulbs, not all of which worked, on a banner above the drum kit. It was a fantastic sight because it just looked the part. Out came the band and my friend Claire looked at me, then looked at guitarist Hampus Klang, and started drooling. These are the type of guys that if you and your significant other brought them home your mother would begin to cry because she’d know what was going to happen later on. Then emerged the big man, vocalist Hell Hoffer, wearing a pair of cheese graters on each arm. Man, I haven’t seen armbands like that since Iron Maiden‘s Bruce Dickinson sported them back in the 80’s.

Bullet were FANTASTIC. They sounded great and looked the part, right down to the matching guitar straps and the Glenn Tipton/K.K. Downing styled guitar duelling. The crowd loved it and you could tell the band loved it as well. The fans looked blown away, but then again Glasgow crowds are usually nuts… just ask Motorhead‘s Lemmy where he loves to play in the UK! After the show the members of Bullet spent the rest of the night at the concession stand meeting fans, shaking hands, and posing for quick photos. I admit it, after the gig I was a bitch and went and shook hands with them. They were really appreciative and I hope they come back to Scotland soon as they could easily sell out a bigger venue based on this performance alone. 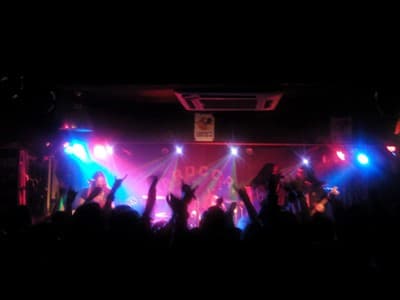 It was then ‘main event’ time. We got exactly what you would expect from Hardcore Superstar and it was great to see them back and sounding really good as they busted out some new songs like “Beg For It”. The only faux pas made was when singer Jocke shouted, “Let’s see those hands England”… nothing kills a crowd in Scotland faster than that! But he quickly apologised and moved on after the chorus of boos died down, which lasted all of a few seconds — fickle crowd. Fans then got treated to some older stuff like “Shame”, which was totally unexpected. The encore set was alright, personally I wanted to hear “Hello Goodbye”, but Hardcore Superstar ended the show with “We Don’t Celebrate Sundays”, which went down like a storm.

All in all the Swedish duo put on a great gig, and I had a killer time, but for me Bullet were simply awesome. If you don’t have their latest CD, or if you haven’t heard it, then buy it now!