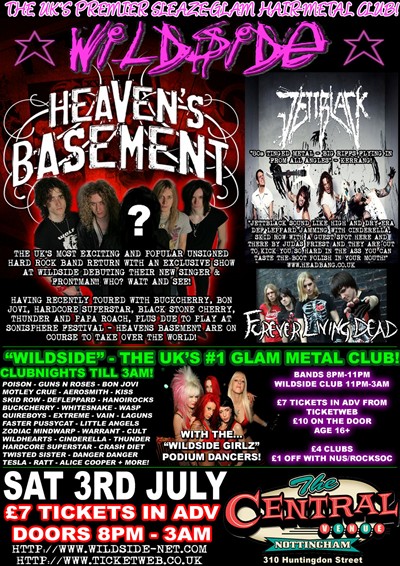 Wildside, the UK’s most popular and established glam/hard rock/AOR club night, has certainly garnered a reputation for putting on awesome live shows and providing the best music the genre has to offer played by some of the best DJs in the scene. Having been going for 7 years now, it has played host to the likes of Vains Of Jenna, Wrathchild, Dogs D’Amour, Zodiac Mindwarp, and of course tonight’s headliners Heaven’s Basement.

Heaven’s Basement have played Wildside more than any other club night in the UK, and it’s not hard to see why they have been asked to come back time and time again. When I got to the venue, there was a queue around the corner, and you could tell from the fact that 50% of the queue had Heaven’s Basement t-shirts on that they were there for the main attraction. The doors opened 5 minutes late, and there seemed to be a slight hold-up due to the fact that there were a few problems with the tickets, but it was no major biggy. Once the queue started moving, people managed to get in very quickly.

First up was local act Forever Living Dead (formerly Bad Appetite). They got the crowd nicely warmed up with their blues inspired hard rock. Full of driving rhythms, they reminded me of a cross between Saliva and Panic Cell with a distinctly American Arena rock sound. The band have good, solid tunes, and in Chris Else, formerly of local act Snakeskin, a true guitar god in the making. As soon as they get a few more gigs under their belt, they should be a force to be reckoned.

Next up, we had Jettblack. This band have been gaining a hell of a reputation for themselves with airplay and video play on Kerrang! and Scuzz Magazines in the UK, even recently ending up on the Kerrang! tour. This band are truly the British contenders to Airbourne‘s throne when it comes to hard, dirty rock & roll. Full of dirty licks, and a complete lack of image, they like to play it hard, play it fast and leave a trail of destruction in their wake. Singer Jon Dow can hit the high notes, and hold them there, like some sort of David Coverdale clone. They whipped the crowd into a frenzy, getting a nice amount of horns in the air while getting the punters ready for Heaven’s Basement — but on the way gaining a fair few new fans themselves. Go to see them live soon, and say that you saw them before they were famous — because it’s way fucking cooler that way.

And so we were on to the headliners Heaven’s Basement. This band have a reputation as the most in demand unsigned act in the UK at the moment. By the time they got to the stage, the place was packed to the back of the venue. The crowd sang along with every word that was sung by their new singer James, who even though he looked a little bit uncertain, and his voice broke a couple of times, seemed to be getting into his stride by the end of the set. It’s always a bit difficult filling the shoes of a previous singer, especially with a band like Heaven’s Basement who have such a hardcore following in the UK. Classic Heaven’s Basement song Misunderstood, a paean to a disaffected generation, was rolled out for the first time in a while and was met with rapturous applause by the crowd. By the time Heaven’s Basement left us the crowd were very happy and were in the mood for a good time.

The club night afterwards was packed. Quite a few people from the gig were sticking around to rock out to the best tunes from Def Leppard, Motley Crue, Warrant, Spread Eagle and Hardline. Two floors of tunes were laid on, with DJs Al and Fangz providing the tunes downstairs, and Stu Roxx upstairs doing the Maximum Overdrive club night, catering more to the AOR and nu-glam crowd. With the Wildside Girlz providing the complimentary podium flesh, the crowd rocked into the night, and were left in a sweaty, gleeful mess.

A true credit to Al the promoter, and long may Wildside stay going strong.