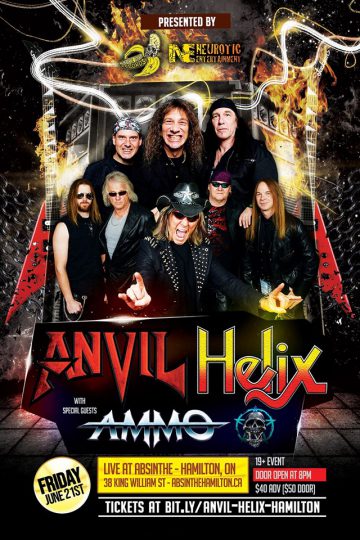 I am not sure why this happens but there were two concerts that would likely appeal to the same audience on the same night within a 45 minute drive of each other. Lynch Mob were playing at The Rockpile in Toronto while the double bill of Helix and Anvil was being offered at Club Absinthe in Hamilton. I was on the borderline on whether to go see Lynch Mob mainly because I didn’t remember being that impressed with the two prior times that I saw the band live (in June 2016 with Oni Logan on lead vocals and in May 2018 with Robert Mason handling the singing). I have always loved the Wicked Sensation album but Lynch Mob‘s song output has never reached that level ever since. Once I found out that Helix and Anvil were going to be playing in Hamilton, I thought that I would go see them play rather than Lynch Mob since there were two solid veteran bands rather than just one! However, my plan was thwarted once I found out that my wife was working that night and my babysitter was only available at 10:30 pm. I had seen the set times for the Helix and Anvil concert and knew that the latter would be starting at 10:30 pm and the former at 11:45 pm. With a 45 minute to drive to get to the Club Absinthe venue and if I left at 10:30 pm, I would miss Anvil‘s entire set yet would have to pay to see for both bands.

Accordingly, I was all set to see Lynch Mob at The Rockpile in Toronto (even though I had yet to purchase a ticket) until I noticed that my wife was still hanging out at her home well past 9:00 pm. We had a quick chat. “Hey, aren’t you late for work? Did you forget that you’re working at 9:00 pm?” My wife replied, “No. I start at 11:00 pm tonight.” “What about the calendar that says you start at 9:00 pm?” “Oh, I forgot to change it.”  With those last words, I made the executive decision to immediately bolt towards Hamilton and hope that the Helix and Anvil show was not sold out. After all, Helix‘s last show in a Canadian club (at Eastside’s Bar & Grill in London, Ontario) had sold out back in the middle of winter. It was a special show however since it was dubbed the Fritz-Fest benefit concert to raise funds for the injured Helix drummer Greg ‘Fritz’ Hinz who had fractured his skull when falling off the roof of his home back in mid-November 2018. In any case, I thought that I would take the chance and worse case scenario, I could drive back to Toronto and catch Lynch Mob (who would likely not take the stage until after 11:00 pm) or perhaps Neurotic Entertainment promoter Karina Davy would remember me since I covered her first ever show that she promoted (Rusted and Hessler at a rather odd venue — the Izakaya Sushi House in Toronto). 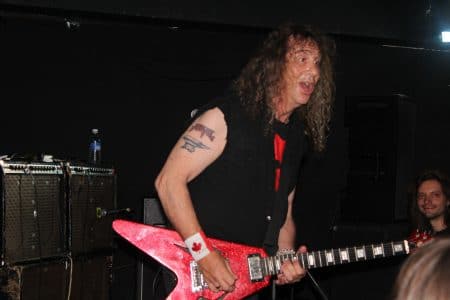 With the clock showing 9:34 pm in my car, I drove pretty quickly to Hamilton and even though I arrived at 10:20 pm, to my dismay, I could hear Anvil playing a song as I approached the venue. Thankfully, the venue was not sold out and I paid $50 to get in. There was a good and enthusiastic crowd in front of the stage watching Anvil perform. Unfortunately, the Club Absinthe stage is only about one foot off the ground so it was going to be difficult taking photos of the bands if stuck in the general admission crowd. Near one side of the triangular shaped stage were what appeared to be two roadies in a relatively free area with some guitar cases lying around and an unobstructed view of the stage. I asked Davy whether I might be able to get into that area to take some photos and she gave me the go ahead so I now had a great spot to take in the entire show!

There is no question when you see Anvil perform that the band members — and especially frontman / lead vocalist / guitarist Lips — love what they do. If you have ever seen the Anvil! The Story of Anvil documentary, you can really feel Lips‘ (as well as 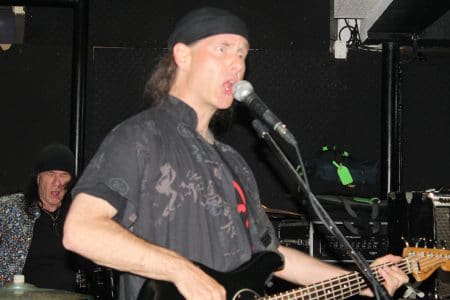 drummer Robb Reiner‘s) passion for and belief in the Anvil music. That comes across on stage as well as Lips, Reiner and “new” bassist (for the last five years) Chris Robertson just really seem to love what they’re doing. I love the way Lips addresses the crowd between just about every song. Sure, I had heard some of his stories before such as his crazy “party in Lemmy Kilmister‘s hotel room for more than 24 hours” story but it was still fun to hear it again. It’s kind of like when Steel Panther roll into town and deliver a similar joke on a familiar topic from Lexxi Foxx having sex with a guy to Michael Starr being a little on the bigger side. It’s fun to hear the jokes even if I’ve heard them or a slight variation of them before. I always like when a band has someone address the crowd even if it’s just introducing a song rather than a group just playing its setlist without any comments to the audience.

One thing that sets Anvil apart from their ’80s contemporaries is that they play a large amount of newer material. Anvil had a ten-song set on this night and 40% the songs that they played came from three of their last four studio albums. That’s impressive 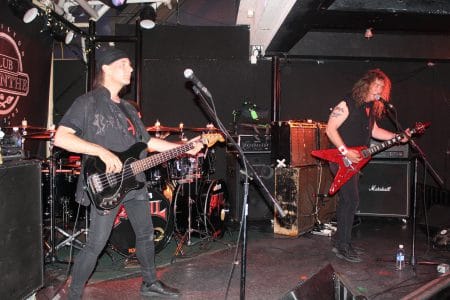 when you think that the band has released 17 studio albums. There was one song from Hard ‘n’ Heavy (1981), three from Metal On Metal (1982), two from Forged In Fire (1983), one from Juggernaut of Justice (2011), one from Hope in Hell (2013) and two from Pounding The Pavement (2018). Frankly, some of the newer songs such as “Badass Rock N Roll” and “Swing Thing” are some of the best songs that Anvil have ever written / played. My favourite tracks from Anvil on this night were the two just aforementioned ones as well as “Winged Assassins.” Two songs that I could have done without were the oldies “Oooh Baby” and “Free As A Wind.”

Impressively, Lips noted to the audience that he is 63 years old yet there does not seem to be any signs of him slowing down in any way. What’s even more impressive is Lips‘ enthusiasm on stage after more than 40 plus years in Anvil. Overall, Anvil put on a solid set and I am looking forward to seeing them play at the upcoming Hair In The Fair Rock Festival in nearby 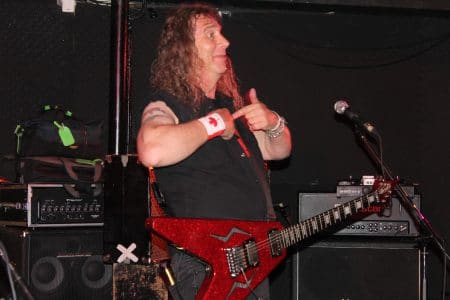 Welland in less than two weeks assuming that the seemingly troubled festival goes ahead.

Helix were scheduled to go on at 11:45 am but the transition time from Anvil packing up their gear to Helix setting up their stuff seemed to drag on and the band only hit the stage at 12:10 am or so. I got a glimpse of their setlist from afar and it looked 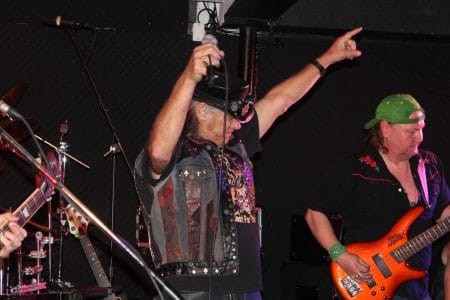 like a number of songs had been crossed out from the setlist. Initially, it had been announced that Helix would be playing for 90 minutes. I couldn’t make out the names of all the songs on the setlist from my vantage points so could not tell exactly what had seemingly been crossed out. In any case, it had been a while since I had seen Helix play in a club setting (dating back to 2011 at The Legendary Red Rooster in Burlington, Ontario, Canada) with my last three Helix concerts in bigger venues / theatres (April 2015, November 2015 and October 2017) so I was looking forward the more intimate setting.

One thing I always seem to notice about Helix whenever they play live is that the group has a lot of great material. Helix‘s songs are definitely more up my alley than Anvil‘s material and I am always surprised as I end up enjoying whatever songs that they play. I would love if Helix released a live album as it feels that they are well overdue in that regard as Half-Alive (1998) only has 11 live songs (and five studio tracks) while Live! In Buffalo (2001) features live recordings dating back to 1983. The current Helix line-up of lead vocalist Brian Vollmer, guitarists Kaleb 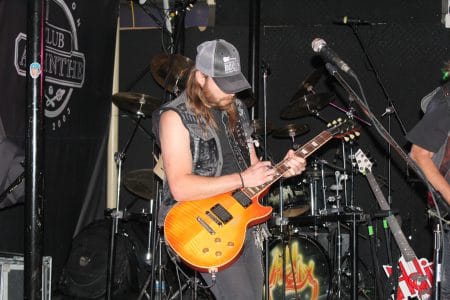 Duck and Chris Julke, bassist Daryl Gray and drummer Greg ‘Fritz” Hinz have been playing together for at least five years and really sound tight so it would be awesome if they released a live album at this stage.

Interestingly, there were almost no changes to Helix‘s setlist from when they played in Brampton in October 2017 as during that occasion, they played 15 songs while this time around, they played 16 songs while dropping Hinz‘s drum solo (which is quite understandable considering what Hinz has had to go through since his fall from a roof in November 2018). Gone also was “Make Me Do Anything You Want” and in were “House On Fire” (from the Long Way To Heaven album), “I’m A Live Frankestein” (one of my personal Helix favourites from Vollmer‘s solo album When Pigs Fly) and the “new” song “Coming Back With Bigger Guns” (from the recently released Old School record). “Coming Back With Bigger Guns” was the only track from Old School. I would have liked a few more songs played from the record as I usually find that I like an album a little more when I have already heard the songs in a live setting. I did end up picking up a copy of Old School from Helix‘s merchandiser extraordinaire Randy Heywood who always puts up the most 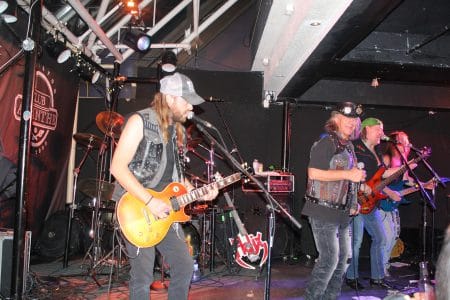 In terms of what records were represented on this night, I was shocked that my favorite Helix album received no love as nothing’s played from 1990’s Back For Another Taste. Perhaps those were the tracks that had seemingly been crossed out on the band’s setlist. At the end, there were three songs played from No Rest For The Wicked (1983), three from Walkin’ The Razor’s Edge (1984), four from Long Way To Heaven (1985), one song from Wild In The Streets (1987), one from Vollmer‘s solo album When Pigs Fly (1999), one from B-Sides (1999), one from Bastard of The Blues (2014), the single “The Devil Is Having A Party Tonight” (2017) and one from Old School (2019).

Helix ended up playing for a little over an hour, which I was kind of happy with since this would give me just enough time to get back home at the time (2:00 am) that I had originally convened for with my babysitter. It was great to see Hinz behind the drum kit again and I suspect that no one was able to tell that he suffered a fractured skull and was in an induced coma only eight months ago. Overall, Helix put on a great set and I am really looking forward to seeing them play at the Hair In The Fair Rock Festival in Welland on July 11th assuming that festival does go ahead. 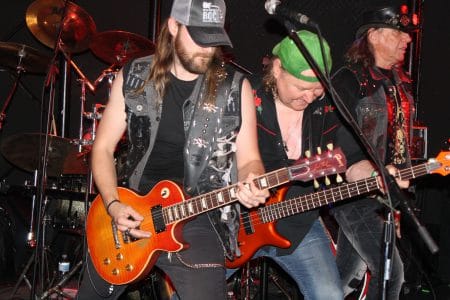 Helix performing “Rock You” at Club Absinthe in Hamilton, Ontario, Canada on June 21, 2019: